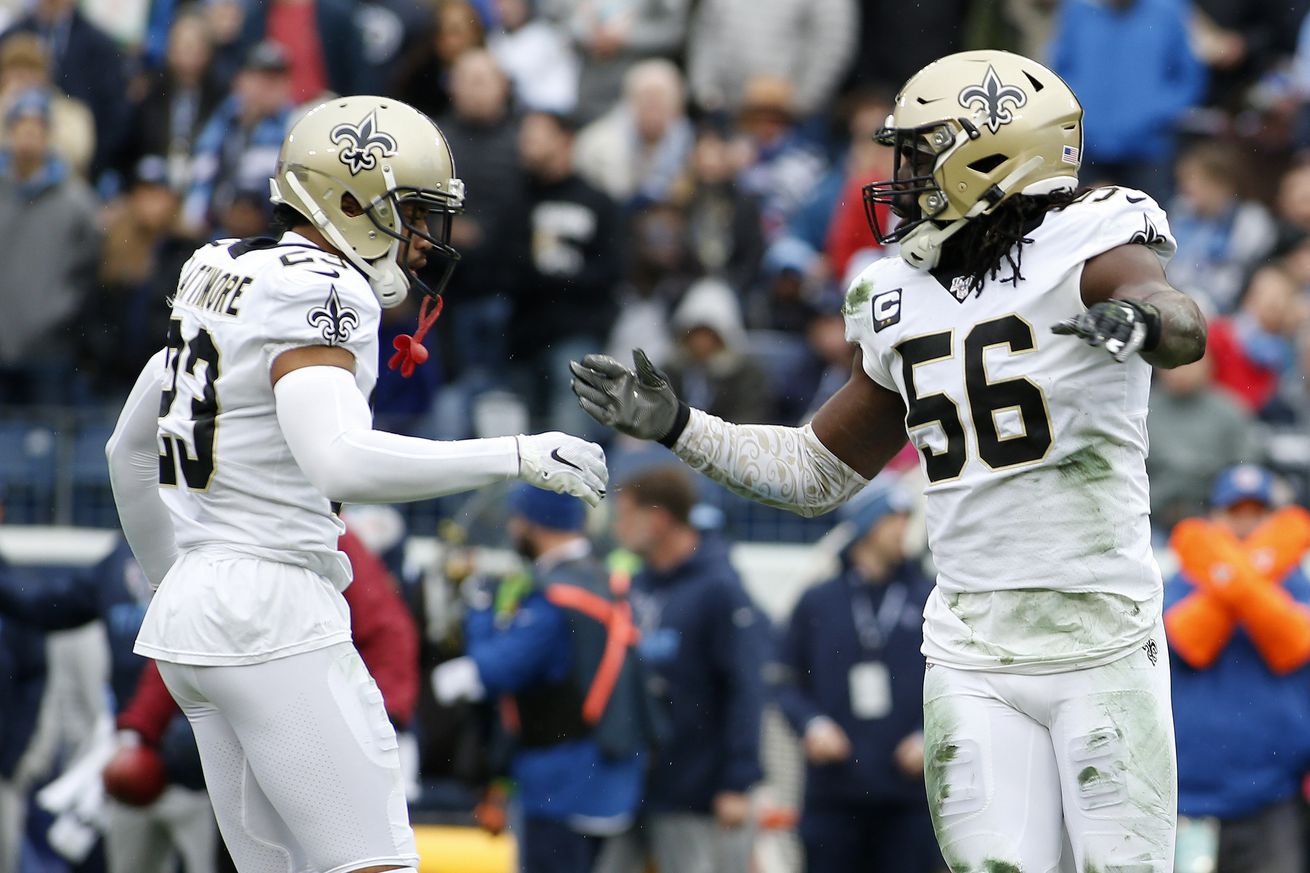 Whether through the draft, free agency, or in-house retention, the New Orleans Saints prioritize culture and it shows.

Culture has always been such a huge part of New Orleans Saints success. How players perform on the field is only one factor of a much larger equation. For the Saints, “fit” is much more than scheme and gameplan. It’s about a community of players, a family operating as one unit.

You will hear the phrase “buy in” a lot in today’s pro sports landscape. The need for players to buy in to a system. The need for a leader that can generate that buy in, in the case of the neighboring Pelicans. The Saints, particularly as of late, have found the product that incentivizes buy in: Culture.

A little over a year ago at the 2019 combine, Assistant General Manager and Vice President of College Personnel, Jeff Ireland, was interviewed by John Deshazier. In his interview, he spoke of “fit,” and finding the right candidates for Head Coach Sean Payton to fold into the locker room.

“My job is to find [Sean Payton] players that fit the kind of guy he wants in the locker room. The kind of guys we already have in the locker room. Make sure that they fit. Make sure that they are going to continue to grow and continue to develop. And want to do that. And then the right athlete that’s going to have a chance to develop and be a starter or good player in the league.”

Hearing this from Jeff Ireland puts on full display the important and attitude and personality in the Saints’ draft process. But it certainly doesn’t stop there. On either side of the draft, free agency plays a huge role for a team’s success both in the players a club can retain and in those they can add. VP/Assistant General Manager – Pro Personnel Terry Fontenot has a similar outlook on the importance of player make up which he shared with Sean Kelly last year.

“We want to make sure we add players with the right make up and also the right skillset and we have a clear vision for how we’re going to use them.”

Again, the emphasis of make up, personality, attitude, what have you precedes that of skillset on the field. Not to say that those elements are more important than a player’s ability to produce on the field, but the Saints have a system. Buying into that system puts players in the best position to succeed in New Orleans.

This is evident in comparison to some franchises around the NFL where players are not as open with the media, not as engaging on social media, and certainly look to have a lot less fun than players do in the black and gold. While the focus on culture isn’t tethered to locker room dancing, the environment supported in New Orleans is unique and a draw for players. That is supported by the franchise’s willingness to allot meaningful opportunity to any player that earns it.

Fontenot even went on to mention the scouting department’s focus on having a clear vision for how each newly acquired player can make the team. Stressing that they want to create the easiest route to the roster possible in order to set new arrivals up with the best path to success. This goes for veteran free agents, rookie undrafted free agents, and draft picks.

Culture was a theme during Monday’s press conferences and has been evident throughout this offseason. Many of the players that spoke to media either displayed it in their own actions or overtly described it.

Marcus Williams spoke to Nick Underhill about advice among the defense not being a vet to youth one-way road. Erik McCoy, who is firmly entrenched in a battle at the center position with rookie first-round draft pick Cesar Ruiz, that he felt it to be his obligation, his duty to speak with and help Ruiz ahead of the draft. Drawing the correlation that the two of them are young players and want to make sure they’re on the same page. While he sees himself as one of the “best five to be on the line”, he clearly thinks the same of Ruiz regardless of which position they occupy. Carl Granderson spoke at length about his goal to contribute playing a role he’d never played in college: special teams.

Outside of the examples they put forth, each of them an example of culture and community in their own right. Defensive end Cameron Jordan has spoken all offseason about getting 1% better every day. Since then we’ve heard Marcus Davenport, Sheldon Rankins, and Carl Granderson reflect that very idea in their own words. Craig Robertson and Ceedy Duce consistently credited for injecting energy at Saints camp. Jameis Winston being welcomed in as more than just another arm in the quarterback room. He’s shown his own ability to lead and is already creating lore amongst the team in the huddle.

These reflections aren’t isolated to an attitude adopted after players have settled in with the team. Ireland has kept his word adding players that bring the gene in with them from college. Saquan Hampton was drafted in 2019 and built a reputation for himself by expressing that it would be “an honor” to play special teams for the New Orleans Saints. Demario Davis became an immediate leader when added ahead of the 2017 season and helped to revamp the Saints defense. Emmanuel Sanders and his agent pursued signing with the Saints because that’s where he wanted to play if not staying in San Francisco. These are all testaments to the culture that’s been created, fortified, and protected in New Orleans.

Even though Nigel Bradham was released on Monday, he felt the draw of the Saints as a “winning organization.” The Saints have made tough decisions to preserve their culture as well. Not to say that Bradham’s release was along those lines. Seems that had more to do with young linebackers standing out and a lack of production. But there have been examples of the Saints moving on from or not signing players, that may have threatened their cultural fabric.

One of the first names that should come to mind is former Saints edge rusher Junior Galette. Galette was released in the 2015 offseason, along with key front office changes that brought upon this renaissance of cultural emphasis. This hasn’t always been a focus for the Saints. Looking back at the now infamous story shared by cornerback Delvin Breaux about the experiences he had during his final season in 2016 it’s evident that there was a toxic nature permeating the organization at a time. The team has worked to clean that up. Even going as justifiably far as moving on from the medical staff that lead to Breaux’s misdiagnosis. Another example in wide receiver Willie Snead who was released after falling out of favor in a 2017 season shortened by a DWI-driven suspension. When tempers flare or someone has shown they are not a fit with the organization, New Orleans has been okay moving on from them as opposed to dragging out potential conflict.

Since the 2015 season where Jeff Ireland assumed his new role within college scouting and Terry Fontenot did so in pro scouting, the team has found the formula that works well for them. And while it took some time to translate to the win column, it has proven constructive to focus some additional attention on fit beyond field. Leaders like Drew Brees, Cameron Jordan, Demario Davis, Malcolm Jenkins, Michael Thomas, and others set the tone for what has become a strong family unit. One that can weather even the most divisive of storms as displayed earlier this offseason. Their leadership is also displayed away from team facilities with charity work, local legislature reform, and community organizing in favor of progress.

The Saints have been the winningest franchise in the regular season over the last three years with 37 wins. While the production on the field has been positive and steadily improving, the cultural constant they’ve managed has played a huge role in their success. Sustaining it will be key in continuing their winning reputation for years to come even with some major changes on the way.