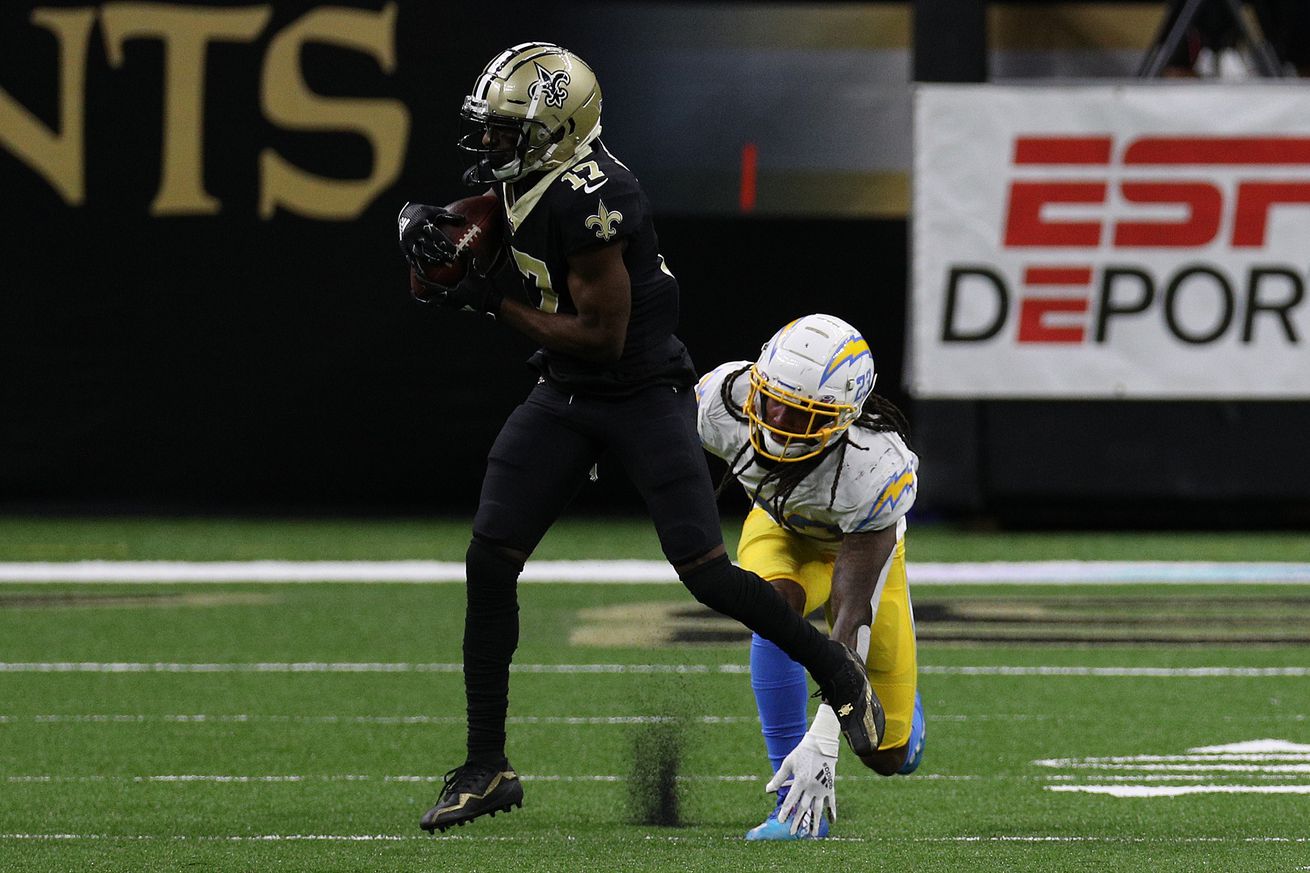 Saints come back from down 17 to win thriller on MNF

The New Orleans Saints will head into the bye week at 3-2 after winning an overtime thriller against the LA Chargers Monday night. Drew Brees continued to look better than the first three weeks, and it’s good to see Emmanuel Sanders gaining some traction in this Saints offense. Hopefully Michael Thomas won’t punch anyone during the bye week and in the lead up to the Saints game against Carolina, but it’s encouraging to see the Saints able to win a few games without him.

Finally it seems like Emmanuel Sanders has found his footing within the Saints offense. He tallied 12 catches for 122 yards for what was his best performance thus far as a Saint. This was his third straight double-digit fantasy performance in a row as the offense is starting to take it’s form. Hopefully you didn’t lose the faith completely and drop Sanders cause he is a solid FLEX option now and could be nearing WR2 status if he keeps up the consistency.

With Michael Thomas’s absence for Monday night due to him throwing hands with Chauncey Gardner-Johnson, I am sure many owners were relying on Smith for some decent points in his stead. However, Smith managed only 2 catches for 8 yards and was outpaced by Sanders, Jared Cook, and even undrafted rookie Marquez Callaway. Smith seems to be falling well behind Sanders in terms of targets, and now that Thomas should be back after the bye, his role will become even smaller.

Mike Williams looked great in his return from injury Monday night. An early injury to Keenan Allen and poor play from the Saints secondary helped him towards posting 109 yards and two touchdowns. His early season injury caused him to be dropped in many leagues, but now I would look to add him on the waiver wire if you are in need of a quality WR.

Kelley projected to be the main beneficiary of Austin Ekeler’s absence, but caused headaches for any owner thinking they had lucked into a starting RB against the Saints. He managed only 29 yards on 11 carries and was hindered by his lack of involvement in the passing game, catching only one pass while fellow RB Justin Jackson caught 5. Jackson looked much better than Kelley on MNF, but the splitting of carries for each back does not make me confident in starting either of them going forward.

So this is what the STUD/dud standings heading into the bye week will look like. Emmanuel Sanders has finally found his way into the STUD column, while Alvin Kamara maintains his commanding lead, despite missing the STUD list for the second straight week.