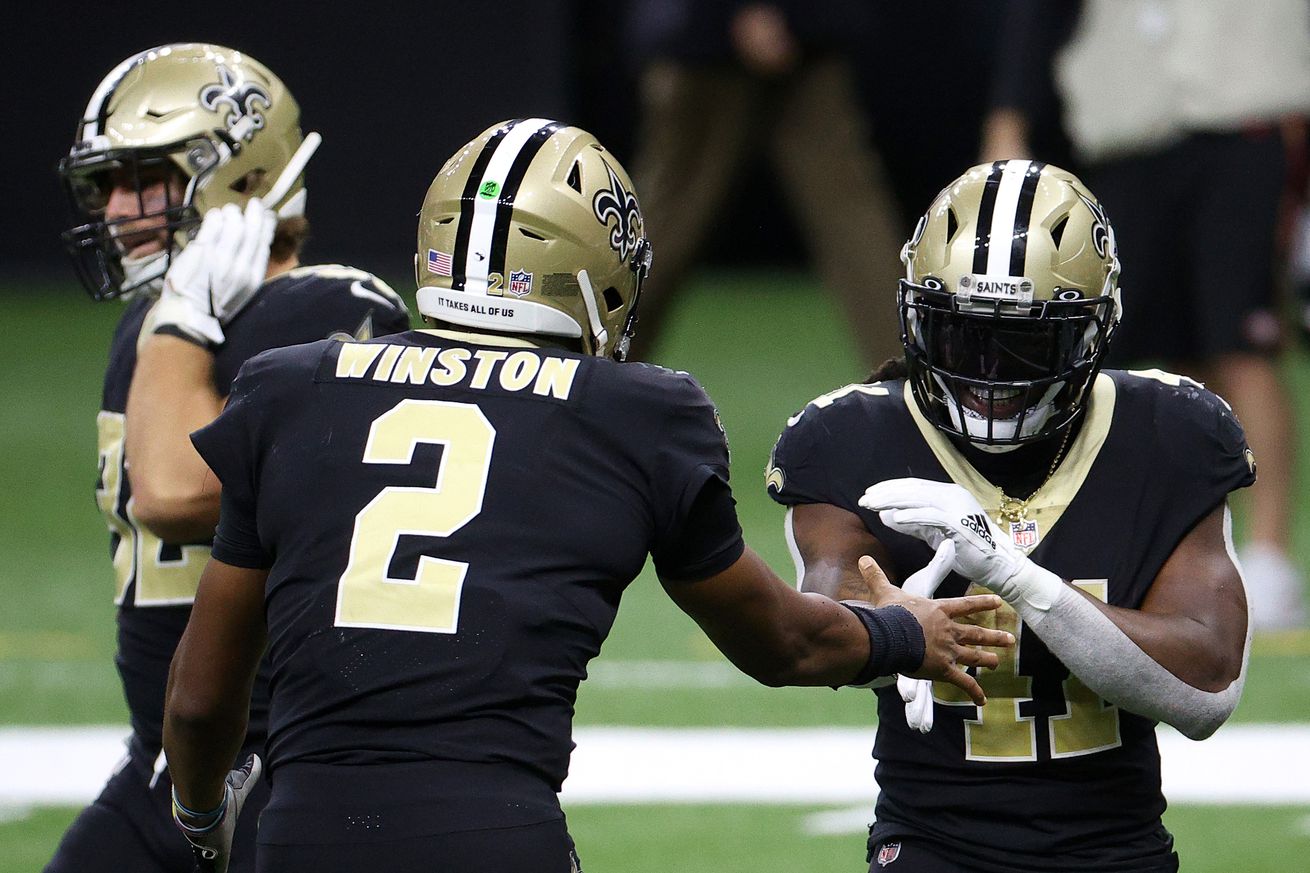 The Saints have won their sixth game in a row, overcoming an early 10-0 deficit to beat the 49ers 27-13. However, the main thing on Saints fans minds this week will not be the Falcons, it’ll be the injury sustained by Drew Brees in the first half. A ribs injury forced Brees to miss the entire second half, and by proxy, limited most of the Saints fantasy scoring in the passing game. I say we all enjoy the win for now and worry about Brees when we have more information.

Kamara added yet another excellent game to his fantasy season on Sunday, turning in his first three score game of the year. Kamara put up 30.5 points despite only 15 rushing yards, aided by leading the team in receptions and receiving yards, and scoring on two of his eight carries. Kamara continues his race with Dalvin Cook for RB1 this year, we will have to wait and see if Kamara has widened his lead or if Cook can close the gap tonight on Monday Night Football.

Cook unfortunately pulled a Calvin Ridley on Sunday, being completely shut out of the box score by failing to secure either of his two targets against the 49ers. Cook has regressed in a big way after a decent three game stretch in which he scored in three straight games. Some decent matchups in the future could get him back on track, but Cook simply is not reliable enough to be a starter, and should be considered a drop candidate if this keeps up, especially if Brees misses any time.

The Saints defense followed up their great performance against the Bucs with a clutch one against the 49ers. They picked off and sacked Nick Mullens twice each, and rookie Marquez Callaway also recovered two muffed punts, the second of which all but sealed the game for the Saints. Chauncey Gardner-Johnson and Demario Davis seemed to be in on every tackle, and new LB Kwon Alexander also looked impressive in his Saints debut. Two matchups with Atlanta and one with Kansas City could prevent the Saints D/ST from being an every week starter, but other than those three games, they should be a top 10 play the rest of the season.

Michael Thomas has had one of the most disappointing fantasy seasons in the NFL so far. He has simply not been well integrated back into the Saints offense since returning from an ankle sprain. Some good news though is that he was still targeted 7 times against the 49ers, but only managed to catch two passes. If Brees misses extended time, it could heavily limit Thomas’s production. Thomas did very well without Brees last year, but has not looked like he is fully back to 100% at all this year, and a QB change will throw yet another wrench into what has been a lost first half of the season for the Saints All-Pro.

Alvin Kamara is closing in on being a lock for Saints Fantasy MVP this year, while the Saints D/ST has moved into a tie for 2nd place with Drew Brees. It has been tough sledding for Saints pass catchers this year as Jared Cook and Michael Thomas are now battling it out for Fantasy LVP, each having two dud performances and failing to register a single STUD performance.