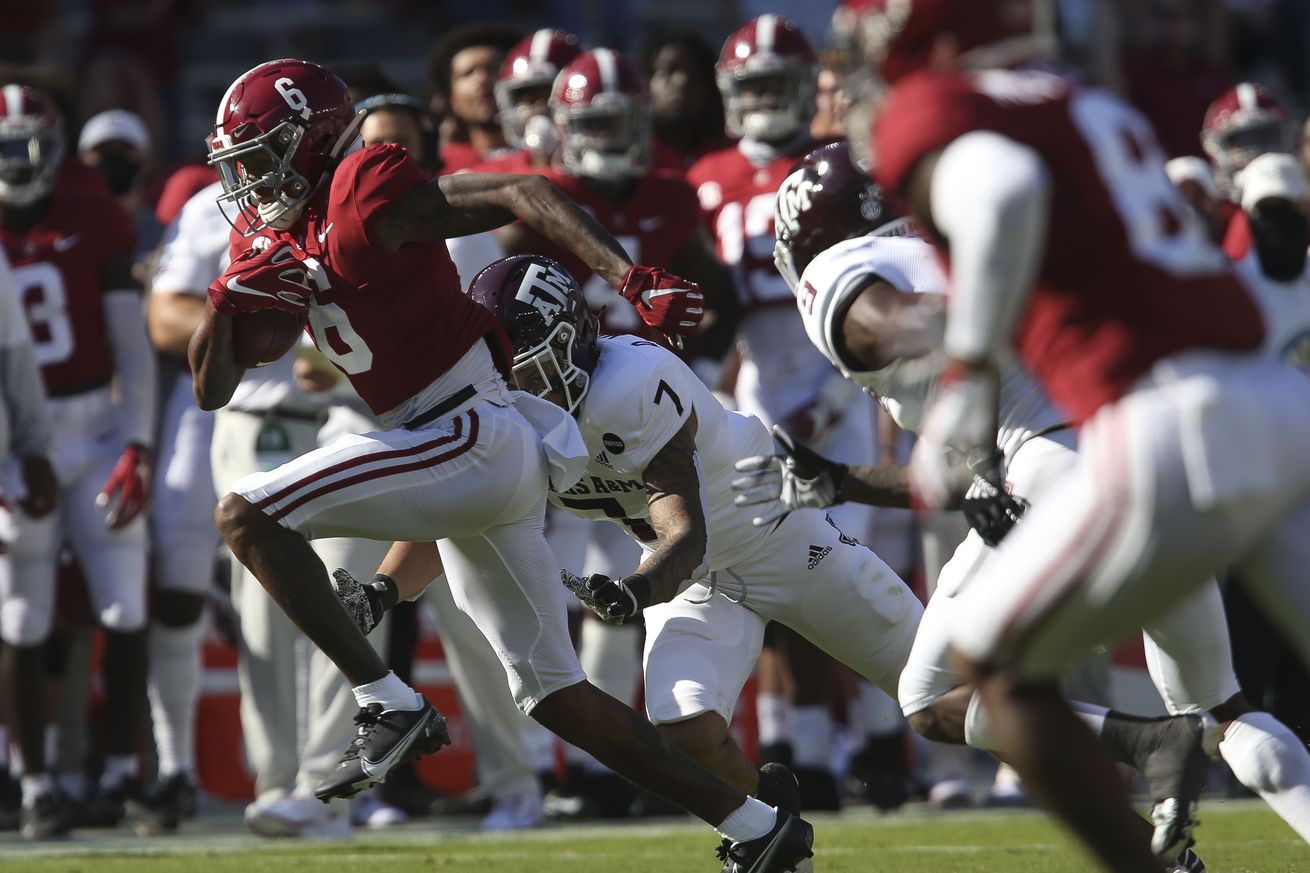 These prospects could make a huge impact at the next level

College football is hitting its stride. After a rusty first few weeks, teams seemed to have found their footing.

No. 2 Alabama continued its dominance with a 52-24 victory over No. 21 Texas A&M led by quarterback Mac Jones’ 435 passing yards and four touchdowns.

With more exciting matchups coming up, here are five NFL Draft prospects to watch in Week 6.

No. 7 Miami will head north for a Saturday night showdown against the No. 1 Clemson Tigers. Both teams have started the season 3-0 and Roche has been a huge reason why for the Hurricanes.

Miami’s top-ranked edge rusher Gregory Rousseau, who is widely considered a first-round talent, opted out of the 2020 season. Roche has stepped into the spotlight in his absence, racking up 10 tackles, 5.5 for loss and two sacks through three games.

A transfer from Temple, Roche recorded 49 tackles, 19 for loss and 13 sacks in 2019. He also had the second-most quarterback pressures with 68, according to Pro Football Focus. Pressuring Clemson quarterback Trevor Lawrence will be key if Miami wants to pull off the upset.

Wilson is off to a historic start in 2020. He’s thrown for 949 yards and six touchdowns while completing a ridiculous 84.5 percent of his passes. Wilson ranks second in the nation in pass efficiency (221.9) behind Alabama’s Mac Jones (222.1).

No. 15 BYU will face the UTSA Roadrunners on Saturday afternoon. The Cougars are coming off of a 45-14 demolition of Louisiana Tech where Wilson had more total touchdowns (5) than incompletions (2).

Wilson was PFF’s highest-graded quarterback in Week 5 and has BYU ranked 1st in total offense and 2nd in scoring offense in the FBS. His continued efficiency could help him become a Day 1 pick in the 2021 NFL Draft.

Campbell is a battle-tested cornerback who can hang with the SEC’s best receivers. He has five tackles and three solo stops through two games against Arkansas and Auburn. Campbell also leads the team with two pass breakups.

Campbell’s size (6-2, 185) and speed make him an intriguing pick in the first round. He could very well be the third cornerback off the board behind Alabama’s Patrick Surtain Jr. and Virginia Tech’s Caleb Fairley, who decided to opt out of the 2020 season.

No. 3 Georgia hopes to stay ready against the No. 14 Tennessee Volunteers on Saturday afternoon. Look for Campbell to be all over the field.

Smith was one of the most productive receivers in football last season. He hauled in 68 catches for 1256 yards and 14 touchdowns in 2019. However, Smith is averaging a career-low 10.9 yards per catch through two games in 2020.

Originally projected as a mid first-round pick, Smith could slide to the twenties, allowing him to be selected by a playoff contender. His elite body control and ball skills could instantly bolster any team’s receiving corps.

No. 2 Alabama travels to Oxford to take on Ole Miss before heading into their bye week. Smith will look to get back on track against a Rebels secondary that got torched for 446 passing yards and six touchdowns by Florida in Week 4.

One of the more underrated prospects in this year’s draft, Cisco led the ACC in interceptions each of the last two seasons. He had 125 career tackles, 28 passes defended, 12 interceptions, 16 pass breakups, two forced fumbles and one fumble recovery in 22 games entering 2020.

Cisco recorded 11 tackles, one for loss, one pass defended and one interception in the team’s first two games against No. 8 UNC and Pittsburgh. He sat out against Georgia Tech due to an injury suffered during pregame warmups.

Cisco is currently projected as an early second-round pick but could move up to a late first. The Orange will look to build on their Week 5 win when they host the 0-4 Duke Blue Devils at 12:30 p.m. ET.