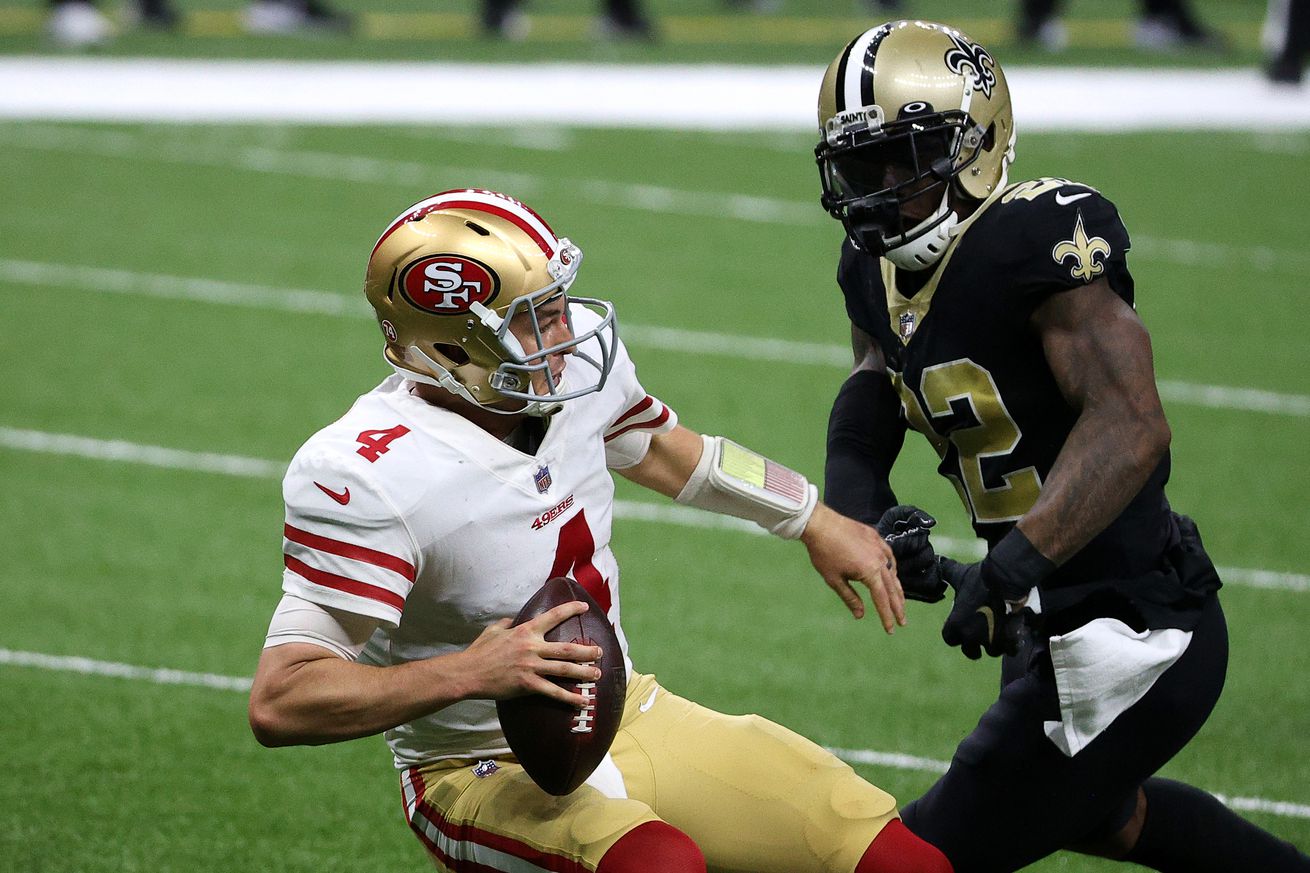 Defense comes in clutch as Drew Brees doesn’t play the second half.

The New Orleans Saints win their sixth game in a row but lose several players to injury in the process.

Saints won the toss and will kick off. It’s a touchback. Kwon is starting in his first game as a Saint. Short yardage plays have gotten the 49ers to midfield. Malcolm Jenkins with a dropped interception. 49ers are 3/3 on 3rd and short on this drive. Helmet on helmet contact for CJGJ, 15 yard penalty. 49ers nearing the redzone. Brandon Aiyuk gets them to the 11. Aiyuk walk in touchdown. SF 7 – NO 0.

Deonte Harris brings the kick out to the 22. 3 and out for the Saints.

Morstead with a great punt to put SF back at their own 25. Nothing going on the 1st down sweep, as they lose 8 yards. Onyemata completely demolishes McKinnon in the background. 3 and out, SF punting from their endzone. Harris muffs the punt. SF ball past midfield. Holding on SF on 2nd down. Richie James gets them to 3rd and short. Juszczyk runs for a 1st. Ross Dwelley makes a diving catch to the 17. Roughing the passer. Kwon Alexander big TFL on 2nd down. Demario Davis with a huge sack on 3rd. Robbie Gould field goal is good. SF 10 – NO 0.

Deonte Harris comes back with a vengeance and gets a 75 yard kick return. Ball on the 25. Saints offense can’t get going even with great field position. Wil Lutz is good. SF 10 – NO 3.

Touchback. First play is a first down. Blitz gets to Nick Mullens and forces an incomplete. Jordan Reed makes a great catch, but is stopped before the first down marker. Punt sails into the endzone.

Brees to Thomas for a first down on the first play. A Morstead punt bounced into Webster, and Callaway was there for the recovery. SF is doing a good job of containing Kamara. Brees is hit hard, it is called for roughing the passer. Taysom recovers a fumbled snap. Kamara finds the endzone. NO 10 – SF 10.

Zack Baun with a great tackle on the kickoff. Drive starts at the 14. Chauncey is coming up with nearly every play it seems like. PJ Williams gives up a first down on a terrible read. Jordan Reed gets the 49ers to midfield. Another 2nd and long brought to 3rd and short. Two minute warning. Pressure gets to Mullens on 3rd down, forces and incompletion. 4th and 1 run is STUFFED by the defense. Saints ball.

Drew Brees 2 minute drill. Short pass to Kamara, run out of bounds. Alvin Kamara screen goes for 34 yards. Quick pass to Tre’Quan Smith incomplete, Smith is down. Should’ve been a penalty and possible ejection on Jimmie Ward, but no call. Emmanuel Sanders first down. 1st and goal. Drew Brees fumbles the snap, picks it up, finds a wide open Kamara for a TD. NO 17 – SF 10.

Deonte Harris brings the ball out to the 22. It’s Jameis time in New Orleans it seems, with Brees hurt. Pass complete, but offsetting penalties will restart the drive. First down screen to Deonte Harris. 3rd down run by Taysom Hill doesn’t work. Bad bounce on the punt.

49ers ball on the SF 31. Aiyuk with a first down on the first play. Nothing going for McKinnon today, he’s averaging 1.8 YPC so far. Another great 3rd down catch by Reed goes for a first down this time. Roughing the passer on Malcolm Roach, 49ers past midfield. Block in the back brings it back to 1st and 20. CJGJ brings more pressure on the edge, Demario Davis stops Hasty for only a small gain. Malcolm Jenkins interception!

Saints ball at the NO 33. Jameis is 2/2 now after another short pass to Kamara. Javon Kinlaw sacks Taysom Hill on 3rd down.

Chauncey Gardner-Johnson first down sack. He gets a QB hit and forces a bad throw on 2nd down as well. 3 and out. Harris fumbles the punt, but JT Gray is right there to pick it up.

Saints ball at the 36. Another dump off to Kamara goes for 19 yards. Saints past midfield. Jameis Winston goes to Michael Thomas for a first down. Back to back Kamara runs get the Saints into the redzone. Kamara beats Greenlaw for a 15 yard catch. 1st and goal. Jameis sacked on back to back plays. Facemask give Saints new life. First bad pass from Jameis. 3rd and goal. Goal line fade incomplete. Wil Lutz trots out and kicks one in. NO 20 – SF 10.

Touchback. CJGJ forces the incompletion on first down. Kendrick Bourne makes a fantastic strong catch for a first down. JaMycal Hasty bobbles the catch and gets punished for it for a loss of 5. Forced to punt.

Saints start at the NO 29. 3 and out. Or so it seemed, Richie James muffed punt is recovered by Callaway. Alvin Kamara finds the endzone for his 3rd TD of the day! NO 27 – SF 10.

Touchback. CJGJ hurt on the tackle. DPI on Jenkins, enforced at the 44. Onyemata bats the pass and forced Robbie Gould out onto the field. FG is good. NO 27 – SF 13.

Touchback. Saints trying to chew clock. Taysom Hill fumble recovered by SF. Ball at the SF 34. Jordan Reed big gain to the NO 40. Aiyuk comes up with a miracle catch. Patrick Robinson interception in the endzone!

Latavius Murray will have the job of chewing clock and closing out the game.