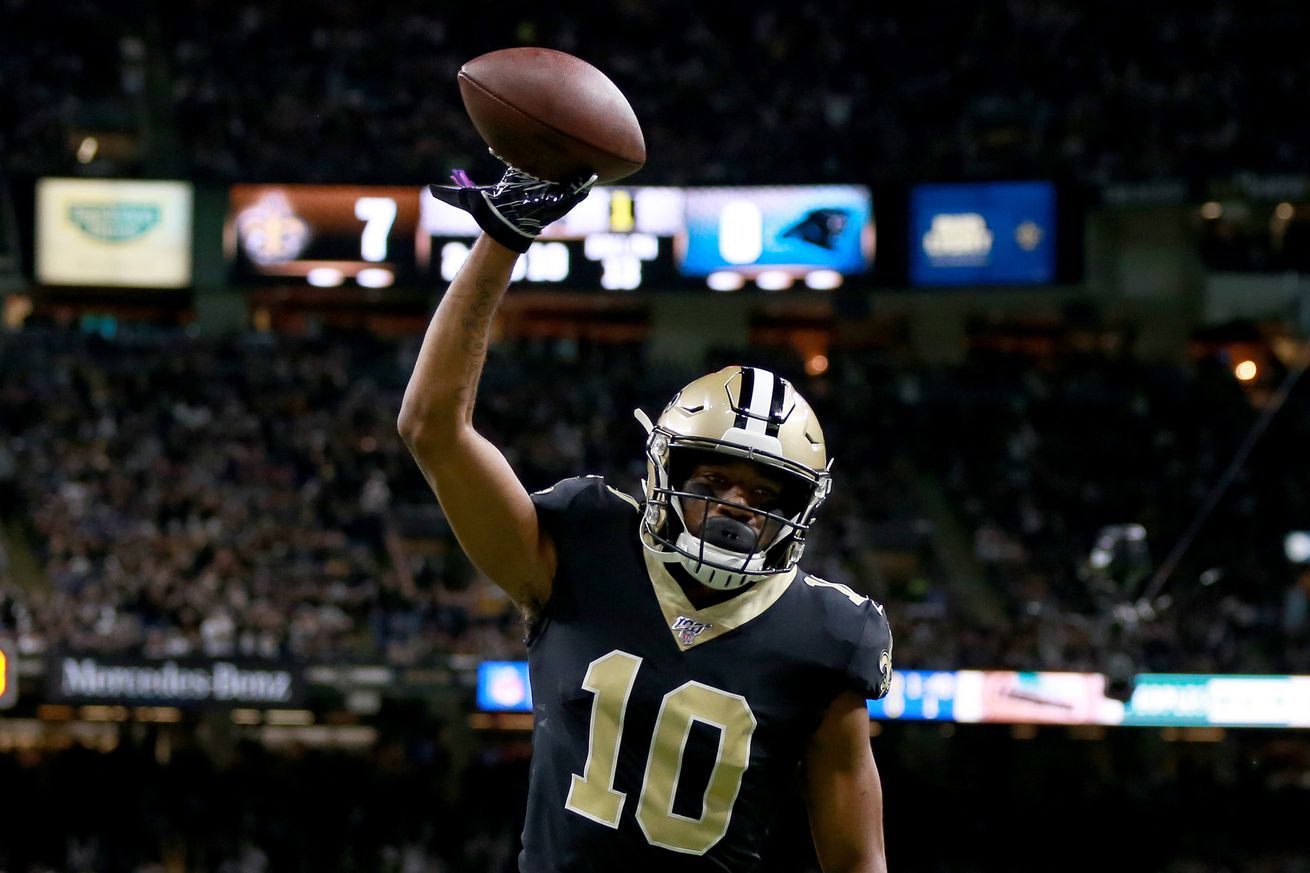 He might not be a star, but an improved Tre’Quan Smith could be an important piece in the Saints offense.

It’s about that time of year where we start hyping up Tre’Quan Smith again.

The UCF product is about to enter his third year with the New Orleans Saints, and ever since that Week 11 game against the Philadelphia Eagles in 2018, it seems like we’ve always expected him to produce more than he does.

Whether it was injuries, rookie mistakes or just a lack of confidence, he just hasn’t been able to put together a full season a solid play.

About five games into his rookie year, it looked like he had maybe figured something out.

In Weeks 5-11 of 2018, he racked up 21 catches out of 28 targets for 353 yards and four touchdowns. He had two monster games, against the Washington Redskins (Football Team?) and Eagles, where most of that production came from — and not to mention, a legendary touchdown the Who Dat Nation will never forget.

In that span, he recorded an 83.4 Pro Football Focus receiving grade that ranked 12th out of 105 qualifying receivers.

He then missed a game in Week 12 against Atlanta with a foot injury, and the rest of his season was downhill.

From Week 13 until the NFC Conference Title game, he caught only eight of 15 targets for 81 yards and one TD, with a PFF receiving grade of 53.2, which ranked 89th out of 92 qualifying WRs. Yikes.

A similar trend of injuries ruining his season occurred this past year, when he started off with a solid first two games — five catches on five targets for 75 yards and a TD — but then sustained an ankle injury, sidelining him mostly until Week 10.

From there, he averaged just under 20 yards a game for the rest of a lackluster year.

So we know he can play well, but we just don’t know if he can sustain that play for an entire season. It may be unfair to blame him, considering injuries played a big part, but it’s a viable question.

Is this the year that narrative changes?

You could certainly make that argument.

Smith can’t control the injuries, but he is working on what he can control. And in an interview with CSC Managing Editor Chris Dunnells, he said his main focus of improvement this off-season has been getting better from the slot and knowing the playbook.

Tre’Quan said he’s learning the playbook more and learning how to play in the slot, both the F and Y positions.

“Last year, I played mainly outside, and at the end of the season I got kind of moved into the slot,” Smith said. “So I’ve been doing a lot of learning the slot, both the Y position and the F position, because they kind of interchange in this offense. So my main thing was just coming in and really knowing the playbook. I thought I knew it a lot last year, but I feel like I’m way farther along.”

You might be thinking, “It’s his third year, he doesn’t know the playbook!?!?” But hear me out. Not only is the Saints playbook more detailed than maybe any other one in the league, but the slot and outside receiver positions are completely different, in alignments, route types, route stems, etc.

He played on the outside on nearly 64 percent of his snaps in his rookie year, and then transitioned to playing over 58 percent of them in the slot last year. And because of the injury, it wasn’t exactly a smooth transition.

The vast majority of his college snaps came from the outside as well.

While he saw more time in the slot last year, we don’t exactly have a huge sample size of targets on these snaps.

He was targeted a mere 10 times from the slot last year, and had the second-lowest target-to-snap ratio among qualifying slot receivers last year.

BUT he did catch nine of those 10 targets for 119 yards and three TDs.

A couple of those catches didn’t necessarily have much to do with alignment, like his TD against the Houston Texans in Week 1, where he basically reacted to a scramble drill by Drew Brees.

But one play did stand out, that could possibly be symbolic of what’s to come from the young receiver.

On the play below in Week 2 vs. the Rams, he gets manned up against a smaller cornerback from Los Angeles who shall not be named, and pretty much big-bodies him in a contested catch situation for a nice gain on a crossing route from the slot.

This is important because he’ll likely be matched up with a good bit of smaller corners and safeties in the slot. And while separating might not be his greatest strength as a receiver, he has shown the ability to go up and get passes in traffic.

Maybe he could excel at that in a tricycle version of what Marques Colston did from the slot back in the day, rebounding over smaller defenders in the middle of the field.

The other play I wanted to highlight from last year was against the Indianapolis Colts in Week 15.

He’s in the slot to the trips side of the formation between Jared Cook and Deonte Harris, and the Colts are in Cover 2 Zone.

The Saints run a Hi-Lo concept, vertically stretching the deep middle linebacker between a middle hitch route by Cook and a post/seam by Smith.

The LB commits to Cook, leaving the middle of the field open behind him for Smith, resulting in a TD.

This is important because it’s a glimpse of what his role will be. He isn’t the primary option in this offense (obviously), and he just needs to be ready for his opportunities when the opposing defense over-commits to one of Michael Thomas, Alvin Kamara, Jared Cook or Emmanuel Sanders.

If he can do that and stay healthy, I could see him having a solid year and changing the narrative on how fans view him.

Not to mention, Smith is a good run blocker. And being in the slot allows him to be closer to the line of scrimmage and contribute in that area, which is very important to Coach Payton.

He may not have the biggest role on this team, but having another versatile guy taking the leap to becoming a reliable target for Brees and this Saints offense could make all the difference in making them more complete and unpredictable.

Considering the flashes of high-level play he’s put on display already and the fact that injuries have held him back from showing his full potential, I’m willing to give Tre’Quan Smith some benefit of the doubt heading into this season.