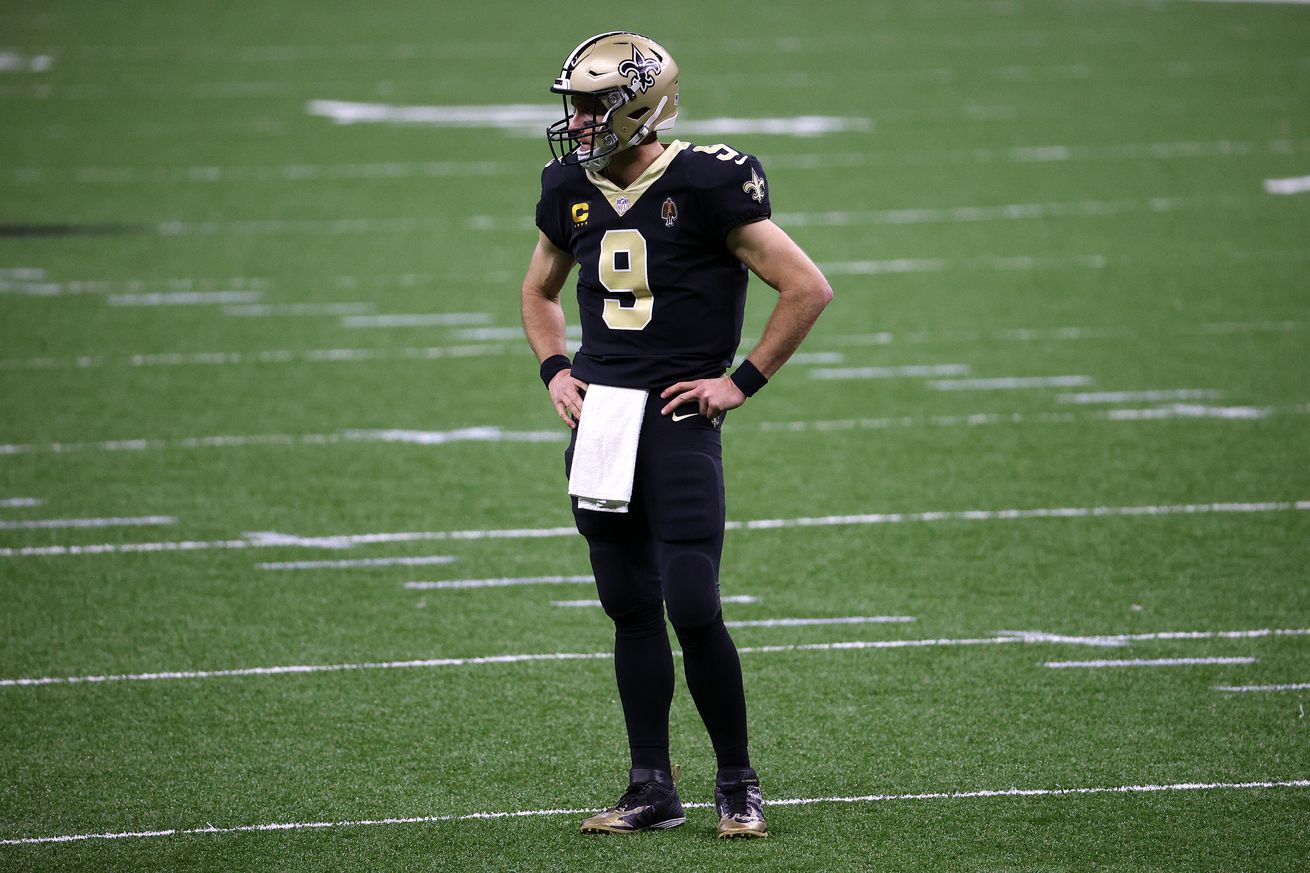 A sixth straight win, but Drew Brees might miss some time

Coming off a 38-3 dismantling of the Tampa Bay Buccaneers (7-3), the New Orleans Saints (7-2) were looking to confirm that win and keep their lead atop not only the NFC South division, but also the entire NFC as they faced a depleted San Francisco 49ers team in the Mercedes-Benz Superdome on Sunday afternoon.

The Niners, led by quarterback Nick Mullens in the absence of the injured Jimmy Garoppolo played loose early, just as you would expect a team with nothing to lose. Before the Saints knew it, they were down 10-0 after the first quarter. A long touchdown drive that took nearly 7:17 off the clock was followed by a muffed punt by dynamite returner Deonte Harris, which led to a San Francisco field goal. The Saints’ offense meanwhile seemed to be stuck in the mud, when a timely 75-yard kickoff return by Deonte Harris in the second quarter led to a New Orleans field goal. Two possessions later, the Saints would get their turnover back, with San Francisco muffing a punt, which was recovered by wide receiver Marquez Callaway. Alvin Kamara would score a rushing touchdown to punctuate the drive and tie the game at 10.

That particular drive in the second quarter would prove significant, as Brees would injure his ribs on a sack by Kentavius Street. Brees would remain in the game until halftime, leading New Orleans to one more score and a 17-10 lead, but would not return to the game in the second half.

Leading 17-10 at halftime, the Saints would extend their unanswered scoring run to 27, adding a field goal and another Alvin Kamara touchdown to take a 27-10 to the fourth quarter. San Francisco would add a field goal for the final 27-13 scoring margin, with New Orleans winning its sixth straight game and improving to 7-2 on the season.

The story of the game however will be the Saints injuries: Drew Brees was hurt and did not return to the game, as did cornerback Marshon Lattimore and wide receiver Tre’Quan Smith. Other key players also sustained injuries, left tackle Terron Armstead, left guard Andrus Peat and safety C.J. Gardner-Johnson all left the game, with only Armstead and Peat returning to action. The Saints came into the game as a healthy squad at last, but alas, their luck in that department did not last very long. It remains to be seen how long Brees, Lattimore, Smith or even Gardner-Johnson will be out, something that will be worth monitoring throughout the week.

The Saints’ second-year safety is a lightning rod. He is the kind of trash-talking player that you love having as a teammate (albeit, not all the time), and absolutely hate to play against. He also is an immensely talented player, and Sunday afternoon against San Francisco, CJGJ reminded everyone that he is not just a loud mouth. Against San Francisco, Saints defensive coordinator used Gardner-Johnson all over the field and the Niners had absolutely no answer for him. He played coverage, blitzed off the edge, played the run, sniffed out screen plays. He was everywhere, recording eight total tackles (six solo) and a sack. Gardner-Johnson was the Saints’ MVP yesterday afternoon until he appeared to hurt his arm on yet another textbook tackle and had to leave the game. Here’s hoping the CJGJ is fine and will be back on the field without much delay.

Football is a brutal sport and injuries are part of the game. Look no further than the Saints’ opponent yesterday: San Francisco was basically fielding a B-team in the Mercedes-Benz Superdome, with the likes of Jimmy Garoppolo, George Kittle, Richard Sherman and Nick Bosa all out, among many others. After the return of wide receivers Michael Thomas and Emmanuel Sanders last week, New Orleans seemed to finally be at full strength coming into the game against San Francisco. It lasted all of one half: Drew Brees was brutally taken to the ground by 49ers defensive end Kentavius Street and as we would learn later, injured his ribs so severely that he could not return to the game. Wide receiver Tre’Quan Smith was taken down by a brutal hit to the head, left the game in the first half and is now in the concussion protocol. Several more Saints players were more or less seriously injured in the game and we will know more about all these on Wednesday when the Saints release their report. In the meantime, we cross our fingers and curse the football deities for their lack of assistance.

Oh yeah, it’s Falcons Hate Week! The dreadful-turned-competent Atlanta Falcons (3-6) come to the Mercedes-Benz Superdome next week off their bye week. Don’t look now, but since firing Dan Quinn, Atlanta has won three-of-four games after an 0-5 start to the season. The Falcons are way behind in the division, and their odds of making the playoffs even in a year where seven teams will make the postseason in each conference are slim at best. But as we all know, Atlanta would love nothing more than to rain on the Saints’ parade towards the top spot in the NFC. To make matters even more interesting, New Orleans could be without starting quarterback Drew Brees in that game, which would likely mean former Bucs quarterback Jameis Winston starting his first game in a Saints uniform. We love the NFL because of the week-to-week drama it provides, we are about to get served with the Saints in the coming weeks. But regardless of what happens afterwards, BEAT ATLANTA!