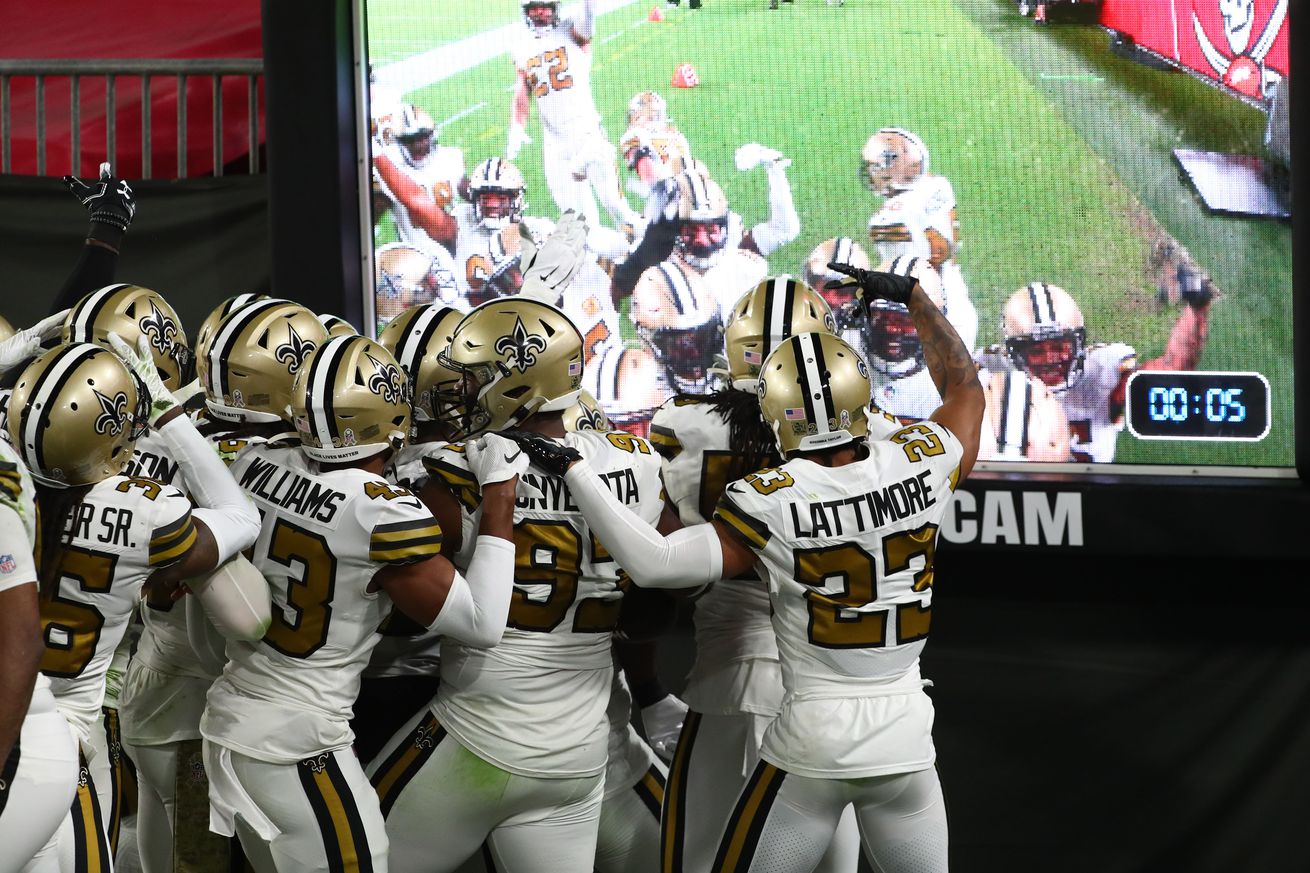 If they keep this up, Saints won’t be flying under the radar much longer

In the featured matchup of the NFL weekend, the New Orleans Saints (6-2) were facing their main 2020 division rivals, the Tampa Bay Buccaneers (6-3) on Sunday Night Football. The game was touted as a battle of 40-plus year-old quarterbacks, with Drew Brees (41) going against Tom Brady (43). In truth, the contest was much more about seizing control of the NFC South, between the leading Bucs and the challengers Saints. New Orleans came out of the gate like a team that wanted to make a statement, remind the NFC South that they were the three-time defending division champions. and boy, make a statement they did, with a resounding 38-3 demolition of Tom Brady’s Buccaneers.

Below is a film of how the game unfolded

The Saints started the game on defense, forcing the Bucs into an early three-and-out. Taking full advantage, the Saints would take their first possession and methodically drive down the field, with Drew Brees finding wide receiver Tre’Quan Smith for a touchdown and a Saints 7-0 lead. The Saints’ defense would force the Bucs into a second consecutive three-and-out, and in one play, Brees would get the offense into Bucs territory on a catch-and-run by Deonte Harris. The Saints would get to the Bucs two-yard line, when their drive would be thwarted via a fumble by tight end Jared Cook. The Bucs would fail once again to gain a first down, giving New Orleans the ball back in Tampa territory. On the first play of their drive, the Saints would get into the Bucs’ red zone on a run by Alvin Kamara. With time expiring in the first quarter, Drew Brees would hit his tight end Adam Trautman for a touchdown, upping the Saints’ lead to 14-0 after one quarter of play. Brees would finish the quarter 11-of-12 for 118 yards and two touchdowns.

On their first drive of the second quarter, the Bucs would go three-and-out yet again, their fourth in a row to start the game. Deonte Harris would return the punt to midfield, giving New Orleans great field position yet again. In two plays, on a reception and a run by Taysom Hill, the Saints would find themselves in the Bucs red zone. Two plays later, Drew Brees would hit Emmanuel Sanders for a touchdown, Brees’ third of the game, giving New Orleans a 21-0 lead after the extra point. On their fifth drive of the game, the Buccaneers would finally get a first down, but on the very next play, Tom Brady would be picked off by defensive tackle David Onyemata while attempting a screen pass, giving New Orleans the ball at Tampa Bay’s 27-yard line. New Orleans would get to the goal line on a run by Taysom Hill, and Alvin Kamara would finish the drive into the end zone for a touchdown and a New Orleans 28-0 lead.

With their sixth possession of the game, the Bucs would finally cross into Saints territory, with Brady finding the newly-signed Antonio Brown to extend the drive. Facing a 4th-and-6 at the Saints’ 38-yard line, Brady under pressure would overthrow his tight end Rob Gronkowski, turning the ball over to the New Orleans. In two plays, a run by Alvin Kamara and a pass to Michael Thomas who was making his return to the field, the Saints would find themselves in Bucs territory again. At the two-minute warning, New Orleans would knock at the red zone door again but stall and settle for a Wil Lutz 36-yard field goal, increasing their lead to 31-0. Taking over at their 25-yard line, the Bucs would turn to the pass and get into Saints territory, when safety Marcus Williams would intercept a deep pass by Tom Brady intended for Antonio Brown with 57 seconds left in the half. The Saints would take a knee, with a commanding 31-0 lead at halftime.

The Saints would start with the ball, using a combination of the running game and passes, and getting near midfield, when Drew Brees would get hit by Shaq Barrett, fumble the ball and give Tampa Bay the ball at the Saints’ 21-yard line. a pass interference on cornerback Janoris Jenkins would give the Bucs the ball at the Saints’ two-yard line. On fourth-and-goal, Marshon Lattimore would breakup a pass from Brady to Mike Evans, preserving the shutout for New Orleans for the time being. The Saints would take over at their two-yard line and extend their drive on a third down pass to Michael Thomas. The Saints would eventually punt after eating some clock, New Orleans’ first punt of the game.

The Bucs would take over at their 20-yard line, and drive into Saints’ territory, when Trey Hendrickson would record a couple of sacks of Brady, with New Orleans’ defense eating up the clock. On 4th-and-7 from the Saints’ 42-yard line, Brady would throw his third interception of the game, this time to safety Malcolm Jenkins. The Saints would then turn to Taysom Hill as a running quarterback, bleeding the clock to end the third quarter. Starting the fourth quarter, Taysom Hill would find Adam Trautman to extend the drive into Bucs territory. The Saints would get into the red zone running the ball and Brees would find his tight end Josh Hill four a touchdown, Brees’ fourth of the game, for a 38-0 lead for New Orleans.

On their ensuing drive, the Bucs would march into Saints’ territory, with New Orleans’ defense playing a mix of pressure and prevent defense. The Saints would sack Brady twice more, forcing the Bucs into a 48-yard field goal attempt, converted by Ryan Succop to narrow the Saints’ lead to…35 points!

On their ensuing drive, the Saints would send former Bucs quarterback Jameis Winston into the game for mop-up duties. The Saints would convert a third-and-7 to keep the clock running. The Saints would eventually take a knee four times at the Bucs 30-yard line, and the Bucs would return the favor as football etiquette prescribes, mercifully ending the game for Tampa, while New Orleans regained the division lead after an impressive sweep of Tampa Bay and the team’s fifth straight win.

It is a beautiful thing to see a young, somewhat unheralded player come into his own and (over)achieve. At the midway point of the 2020 NFL season, that player for the Saints is defensive end Trey Hendrickson. Sunday night against the Buccaneers, Hendrickson was a nightmare to deal with for the Bucs’ offensive line. His stat line read like this: three total tackles, two solo tackles for loss, two sacks. But the constant pressure Hendrickson put on the Bucs’ protective unit and Brady, even when he did not get home, was palpable and made Tampa Bay’s life miserable on offense. It was no surprise to see the Bucs go three-and-out on their first four possessions of the game, Hendrickson had a hand (often literally) in that.

Coming into the game, the defense that was highly touted was the Buccaneers’. The Bucs defensive unit has been outstanding so far this season, while the Saints’ has been up and down. Last night against the Buccaneers, Dennis Allen’s men came to play, as if buoyed by the fact they were considered the weakest link of the four units participating in the game. New Orleans held the Bucs to four consecutive three-and-outs to start the game. The feat was Tom Brady’s first in his entire Hall-of-Fame career. The defensive line harassed Brady all night, sacked and intercepted him three times apiece. The Bucs finished the game 1-of-9 on third down (11%), 0-for-3 on fourth down and with only a meager field goal to show for it. That is championship-level defense.

Next Sunday afternoon, the Saints face the depleted San Francisco 49ers (4-5) in the Mercedes-Benz Superdome at 3:25 CT, seeking a sixth consecutive win. The Niners will be without quarterback Jimmy Garoppolo and tight end George Kittle, both out with long-term injuries. New Orleans however will be wary of San Francisco, as any win in the NFL requires complete focus and Kyle Shanahan and his coaching staff have now had time to put together a game plan around backup quarterback turned starter Nick Mullens. The Saints probably haven’t forgotten the crushing 48-46 loss they suffered at the hands of the 49ers last season, a loss that prevented New Orleans from earning a bye week in the playoffs. The Saints proceeded to exit the postseason in the Wild Card round against the Minnesota Vikings. It is fair to expect that Sean Payton’s group will be ready to play.