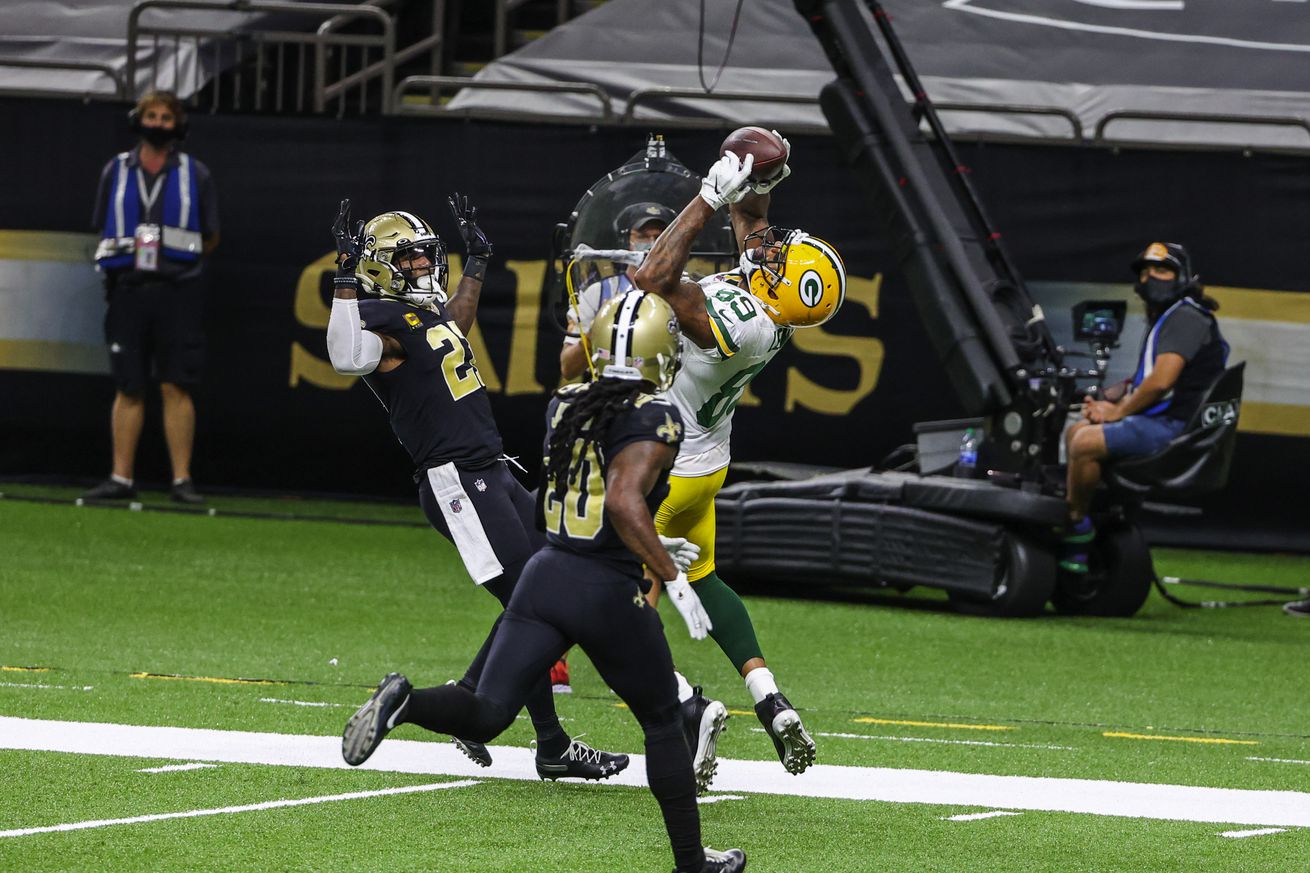 Coming off an embarrassing 10-point loss at the Raiders last Monday night, the New Orleans Saints were eager to redeem themselves and get back on the right track. To do so they would have to slay the big bad Green Bay Packers and quarterback Aaron Rodgers.

The Saints would start the game ominously with a three-and-out, with Drew Brees pass to Deonte Harris short of the sticks. New Orleans, trailing 3-0, would eventually turn to the running game, with Alvin Kamara taking the ball for a 49-yard run (his longest in two years) and eventually being on the receiving end of a Drew Brees’ touchdown pass. New Orleans would win the first quarter 7-3. The Packers would respond by scoring the next 10 points and take a 13-7 lead early in the second quarter.

The next run of points would be the Saints’ however, as New Orleans would score the next 10 points to build at 17-13 lead at halftime. Of the 10 points, Brees would find wide receiver Emmanuel Sanders for his second touchdown reception as a Saint in a beautiful two-minute drive to end the half.

With the Packers receiving the ball to start the second half, Green Bay would drive right down the field, using a 72-yard bomb to Allen Lazard en route to a touchdown to retake the lead at 20-17. After a field goal by the Saints to tie the game at 20, the Packers would respond in kind with a touchdown to take a 27-20 late in the third quarter of a game that flew by.

With the Packers up 27-20, Alvin Kamara would show his insane running ability with a nifty 52-yard touchdown reception. On the catch and run, center Erik McCoy would spring Kamara by showing incredible athletic to block for his running back. Going into the fourth quarter, the teams were tied at 27.

early in the fourth quarter, the Saints would then stop the Packers on 4th down near midfield, only for Taysom Hill to fumble the ball right back to Green Bay. the Packers would convert the gift into a field goal, taking a 30-27 lead with a about 9 minutes to go in the game.

Following a three-and-out by the Saints, the Packers would drive right down to the Saints’ goal line, helped by yet another pass interference penalty by the Saints’ defense. For the second straight game, the Saints had an enormous amount of penalties, most of them on defense. Green Bay would score a touchdown and take a 36-27 lead at the two-minute warning.

The Saints would kick a field goal with 32 seconds left to make it 37-30. New Orleans would then attempt an onside kick that unfortunately wouldn’t go ten yards and land out of bounds, ending the game. New Orleans falls to 1-2, while the Packers move to 3-0.

When he got paid this offseason to the tune of a 5-year 75 million dollars contract, many fans and pundits thought Kamara had been grossly overpaid. On Sunday night against the Packers, Kamara had 197 all-purpose yards: 58 rushing (including a dazzling 49-yard run) and 139 receiving with two touchdowns. So far this year, Kamara has been the Saints’ offense, making up for the loss of Michael Thomas, and running the ball efficiently inside and outside the tackles. Pound-for-pound, when healthy, AK41 is the best running back in the NFL.

Stale Beignets with Lukewarm Coffee: The Saints and Penalties

After being flagged for 10 penalties and 129 yards against the Raiders, the Saints were called for eight penalties and 83 yards against the Packers last night. But penalties are not created equal: of the Saints’ eight penalties, four were pass interference calls that extended Packers drives, gave and directly led to scores. Through three games, the Saints have been called for 24 penalties, for a total of 331 yards. That is an obscene amount of penalties to and real estate to give to any NFL team, let alone good team like the Packers. The biggest issue however is the clear lack of discipline exhibited by the Saints so far this year, especially on defense. Defensive backs are panicky, grabby and the referees do not seem to miss many of these fouls. If the Saints wish to turn this young season around, defensive coordinator Dennis Allen better start drilling something in the head of his players: trust your technique.

Next Sunday, New Orleans travels to the Motor City to play the Lions. Detroit (1-2) started the season 0-2 with two divisional losses to the Bears and Packers, before an impressive 26-23 win on the road in Arizona yesterday. The game will feature two middling NFC teams battling it out, with only one of them coming out of the octagon…I mean the stadium with a 2-2 record and a slightly brighter outlook on the remainder of the season.