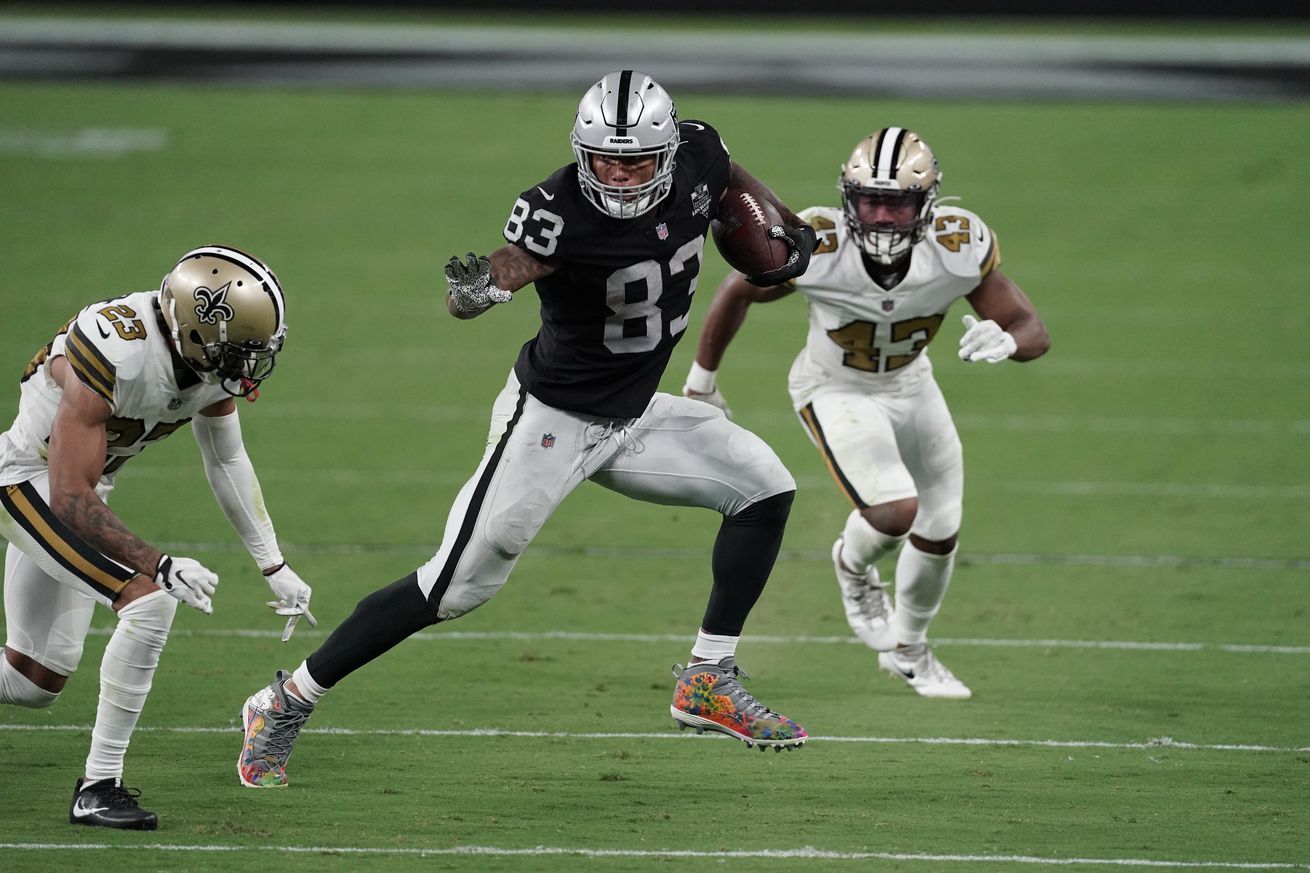 This is your “After-Saints-Game” breakfast, where we talk about the state of the Black and Gold, we debate the goings-on with the team and talk about what’s next at this point of the season. So, sit back, take a bite and a sip while your brain slowly wakes up, and let’s catch up on some football.

Coming off a good, but not really convincing 34-23 win against the Tampa Bay Buccaneers (1-1) in week one, the New Orleans Saints (1-1) were on the road for their second game of the young NFL season. The Saints were playing the Las Vegas Raiders (2-0) in their brand new digs, Allegiant Stadium. The Saints dominated the first quarter of the game, racing out to a 10-0 lead.

The second quarter would be a different story, as New Orleans would get outscored 17-7, the last three Las Vegas points aided by one of those baffling Drew Brees’ interceptions as the Saints were trying to mount a 2-minute drive while nursing a 17-14 lead. The Saints and the Raiders would go into halftime tied at 17, in a game that felt as though New Orleans should have been ahead by a larger score.

In the third quarter, the Saints who once led 17-7 allowed the Raiders to take the ball and drive down the field for yet another touchdown, giving Las Vegas a 24-17 lead. 17 unanswered points against a putrid Saints defense that had no answers for tight end Darren Waller of the Raiders. Waller casually torched whoever tried to guard him to the tune of 12 catches for 103 yards and a touchdown. The Saints would get shut out in the quarter, trailing 24-17 going into the fourth.

In the final quarter of the game, the Raiders would extend their scoring run to 24 consecutive points without the Saints responding, leading New Orleans 31-17. The defense showed an effort (or lack thereof) reminiscent of the worst 2012 performances. New Orleans would eventually score a meager touchdown, their only score of the second half in a decisive 34-24 loss.

New Orleans falls to 1-1, a record they’ve had each of the last four seasons after two games. Most discouraging was the putrid play of the defense, which allowed Derek Carr to look like prime Joe Montana, and let the Raiders’ offense enjoy nearly an entire quarter advantage in time of possession, as Las Vegas held the ball for 36:32 minutes of the 60-minute game. Back to the drawing board never rang more true.

It’s the first time in the history of BaCauL that I give this award to an opposing player, but after trying hard to find one on the Saints, I decided that no one played beetter than Las Vegas Raiders tight end Darren Waller. How many of you knew Waller’s name before this Monday night? Not to be disrespectful to Waller, on the contrary: last night, he announced himself to the NFL world by simply being “unguardable!” Malcolm Jenkins? pfft! Marshon Lattimore? Don’t even try. Linebacker Demario Davis probably had the most success against Waller last night, and even he had his hands full trying to slow down the 6’6”, 255 lbs tight end out of Georgia Tech. Waller finished the night with 12 catches on 16 targets, 103 yards and one touchdown. But the numbers do not do justice to just how dominant he was against a Saints’ secondary that had played really well in week one against the likes of Mike Evans and Chris Godwin of the Tampa Bay Buccaneers. Last night, Waller ate the Saints’ lunch and made them pay for it.

What was this? 2012? The Raiders fell behind 10-0, then 17-7. And from that point on, they rattled off 24 consecutive points. In the process, they converted 59% of their third downs (10-of-17), made both of their fourth down attempts and held the ball for 12 minutes and 36 seconds more than the Saints. An eternity in a football game! Late in the third quarter, trailing 24-17 and with a chance to limit the Raiders to a field goal, the Saints let running back Jalen Richard run into the end zone from 20 yards out on a third-and-10 play that will make New Orleans’ defensive coordinator Dennis Allen cringe when he watches the game tape. The defense showed up for about a quarter and seemed to decide that the job was complete. They couldn’t cover the Raiders’ most dangerous receiver of the night, Darren Waller and it didn’t matter who Allen tried on him. The Saints were considered a Super Bowl contender before the season started. Last night they looked like anything but. Thank Marie Laveau, it’s only week two.

Whatever ailed the Saints’ defense on Monday night in Las Vegas, you can bet that Green Bay Packers quarterback Aaron Rodgers was paying attention and very likely licking his chops. The Saints face the Packers (2-0) on “Sunday Night Football” in just six days in the Mercedes-Benz Superdome. NFL football, of course, is a fickle beast: I do expect the Saints’ defense to play better on Sunday night against Green Bay. In truth, if they do not, it might be time to panic. But the NFL is a week-to-week league, and clearly some teams have responded better to the lack of training camp and preseason games than others. On Monday night, the Saints seemed to think that it was still preseason game number four. Someone please tell them that the regular season started about a week ago.