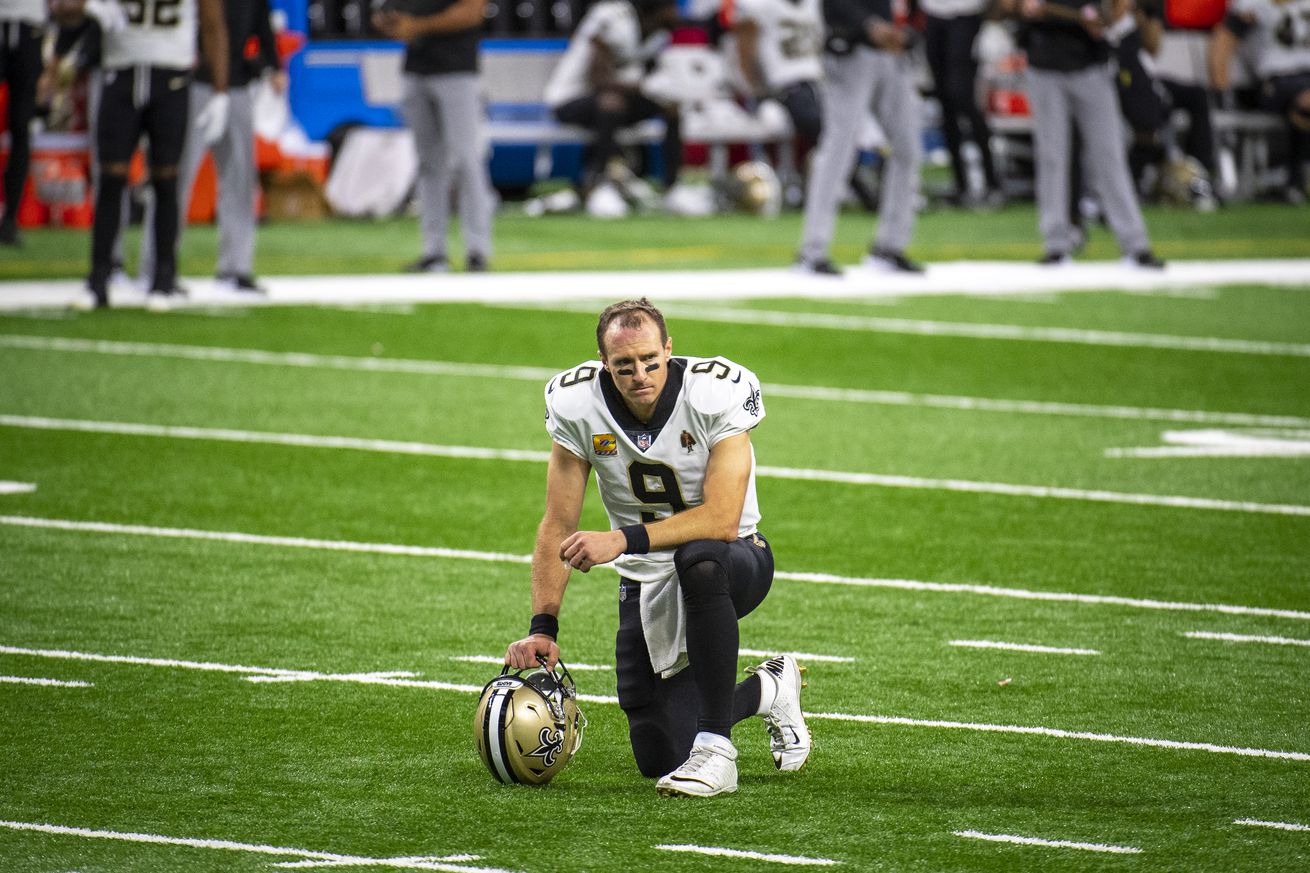 It appears it has been greatly exaggerated

So, it appears Drew Brees can throw farther than 20 yards! In the Saints’ 35-29 win at the Detroit Lions yesterday, the Saints’ quarterback had a 29-yard pass to Alvin Kamara, most of which traveled through the air. The play happened in the second quarter with the Saints trailing 7-14 and facing a 4th-and-4 at the Detroit’s 43-yard line. Later in the game, Brees also had a 20-yard touchdown pass to Tre’Quan Smith, all of which traveled through the air. Phew, we can all breathe easier, Drew Brees’ arm is not fully mummified just yet.

All kidding aside, the kind of win that the New Orleans Saints recorded yesterday in Detroit is the type that can galvanize a team and help it go on a run of victories. The Saints were playing without a plethora of key starters, among whom wide receiver Michael Thomas, tight end Jared Cook, cornerbacks Marshon Lattimore and Janoris Jenkins. The Saints also lost right tackle Ryan Ramczyk with 10 minutes to go in the third quarter. Finding themselves in a 14-0 hole before you could even sit down with your beer to enjoy the game, the Saints didn’t blink: New Orleans proceeded to score the next 35 points of the game in the course of three quarters. Leading 35-14, New Orleans would see their running game severely hampered by the exit of Ramczyk due to a concussion, and hold on for dear life as Detroit scored the next 15 points, but got no closer.

The Saints are now 2-2 and the outcome of the season suddenly looks much more promising moving forward, especially considering the caliber of players that New Orleans figures to get back soon.

The Saints’ signal-caller makes his first appearance in the Fresh Beignets awards this season. Brees was stellar on Sunday. Not necessarily in sheer numbers: his stat line read 19-of-25, 246 yards, two touchdowns and one interception for a quarterback rating of 116.4. What was stellar about Brees’ performance yesterday in Detroit was his command in crucial moments of the game. Brees’ timing was impeccable in the aforementioned 29-yard pass to Kamara on 4th down, one that would lead to a score and the Saints tying the game at 14. His 20-yard touchdown pass to Tre’Quan Smith to make the score 28-14 was a thing of beauty. Brees also connected six time with Emmanuel Sanders for 93 yards, each pass happening with traffic, and being crucial to extend a drive. For the first time all season, it felt as though the Saints would always have an answer offensively no matter what the Lions did. Did you feel that too?

Stale Beignets with Lukewarm Coffee: The Referees vs. the Saints

Before you call me out for being a homer, I do not believe that referees alone ever lose a team a game. I also do not believe that NFL referees hate the Saints, even though I know that the NFL commissioner doesn’t exactly hold Sean Payton very dear in his heart. No. What I simply think is that the Saints’ secondary has been called for so many pass interference penalties to start the season that referees preemptively expect Saints’ defensive backs to foul on deep throws. In other words, throw long on the Saints, and the referees is likely going to award you a gazillion free yards that you didn’t really earn. Don’t get me started on pass interference being a spot foul: that is foul! Sunday in Detroit, the Saints cleaned up some of the penalty problem that has plagued them at the start of this season. New Orleans had only four penalties for 67 yards. Yay! However, two of them were pass interference penalties, one on Marcus Williams for bumping a receiver on an uncatchable ball that was already past the receiver, and the second on Alex Anzalone on a completely ticky-tacky push that negated an interception by Marcus Williams in the end zone as the Lions were trying to mount a comeback. The penalty was 32 yards and two plays later, the Lions would score a touchdown to make the score 35-21. As a referee, your job is to be as unbiased as possible. Yes, refs are only human beings like the rest of us. But they get paid to do that job. They signed up to do that job. And they have to do it to the best of their abilities. If what we are seeing is the best of the referees abilities, something has to be done to make it better, because it’s not even close to being acceptable.

The Saints, who are seemingly on prime time every week this year, play the Los Angeles Chargers next Monday night in the Mercedes-Benz Superdome. The Chargers just lost a hard-fought 38-31 decision at the Bucs are no pushovers. Rookie quarterback Justin Herbert has played admirably in place of the injured Tyrod Taylor. Herbert was 20-for-25, 290 yards, three touchdowns and one interception at Tampa yesterday, and for a while had the Chargers leading big against the Tom Brady-led Bucs. At 1-3, the Chargers will be looking to rebound, while the Saints will welcome the extra day in hopes of getting some of their injured starters back. This game isn’t one to take lightly, but the Saints will undoubtedly be favored to improve to 3-2 on October 12 in NOLA.