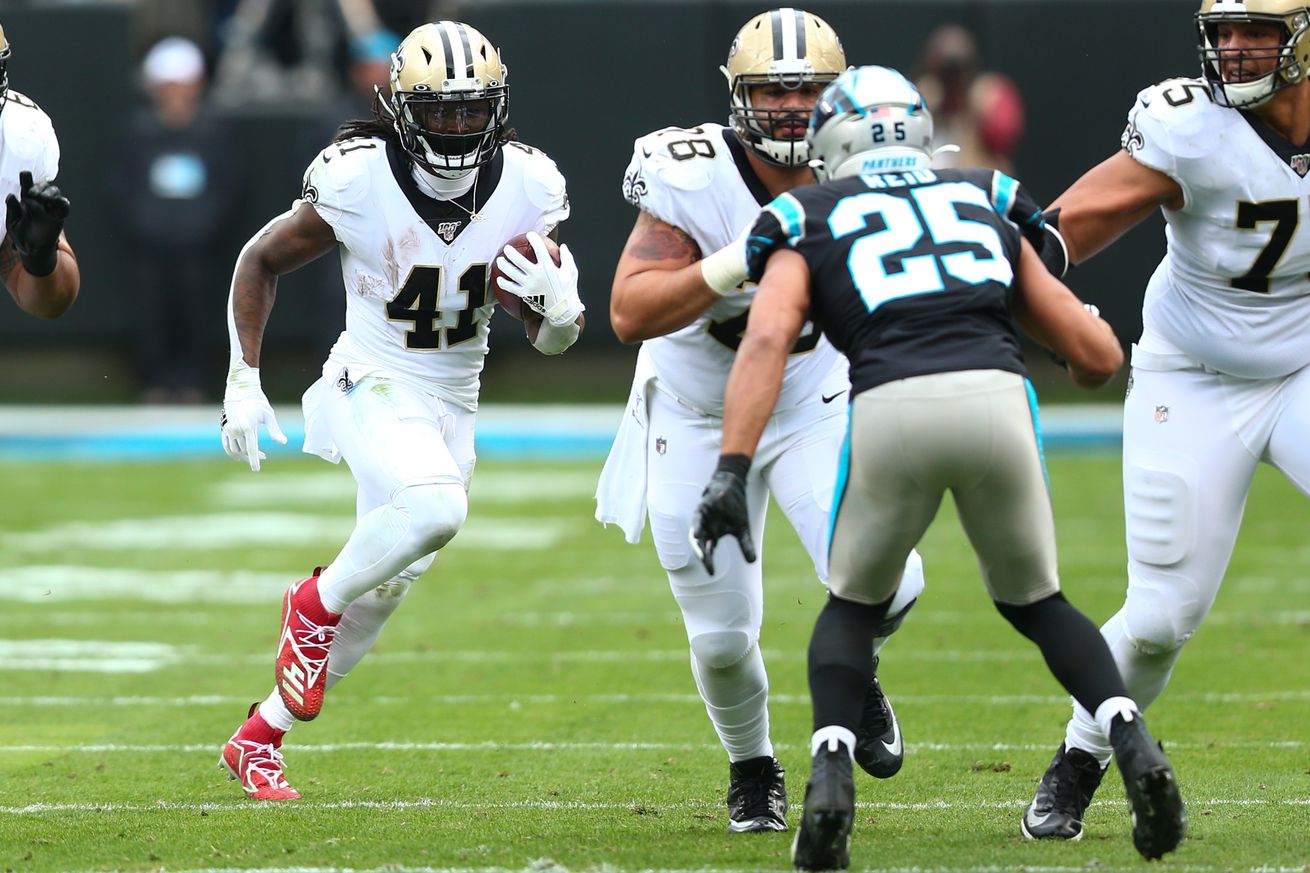 Kamara is an integral part of the Saints’ offense, but with so many players to pay, he’ll be hard to lock in.

Alvin Kamara is the prototype Sean Payton running back. A player who is equally effective between the tackles and outside, not to mention able to handle the demanding New Orleans Saints’ passing game to their running backs. All of that, and the fact that Kamara played most of last season on an injured knee, point to the importance of re-signing him before he moves on.

However, the Saints’ absolutely absurd 2017 draft has finally come to haunt them. It’s not a bad problem to have by any means, but Ryan Ramcyzk, Marshon Lattimore and Marcus Williams are all due new deals, alongside Kamara. Kamara missed part of training camp this week, and rumors have swirled about his trade availability and gulfs in his contract negotiations.

So, where do the Saints and Kamara stand now? According to neworleans.football’s Nick Underhill, things are mostly back to normal and Kamara looks healthy.

– Saints simulate practice
– One of my roster picks falls back to the bubble
– Kamara looks healthy
– Emmanuel Sanders makes a nice play
– Tommy Stevens flashed again
– Who I would pick as QB2
– MOREhttps://t.co/LY2W7R8zA9 via @NOdotFootball

At this point, pondering how the Saints are going to make the salary cap is a fool’s errand. Mickey Loomis, at least on the surface, seems to have a clear plan in line moving forward, and it’s unclear if Kamara is a part of that plan long-term. But the simple reality is that if a running back is drafted and makes the Pro Bowl three years in a row with 1,000-plus yards in each season, you find the money and make it work.

One of the great lies peddled in the current NFL is that running backs are an expendable part of the roster. Depth at the position is a key factor for the Saints. In 2009 it was Pierre Thomas and Reggie Bush as a 1-2 punch. In 2011 it was Thomas, Darren Sproles and Mark Ingram. Drew Brees, Payton and the Saints are their best when they aren’t forcing touches to replacement-level backs. Paying running backs isn’t a kiss of death either. In the first year of his massive 6-year $90 million deal, Ezekiel Elliott had 1,357 rushing yards for the Cowboys.

Ty Montgomery and Tony Jones can pick up some of the slack for the Saints, but the Latavius Murray deal didn’t seem to include being a bellcow for New Orleans in the fine print. He might have what it takes to shoulder that role, but he would look better in a larger supplementary role that what he had last season. Indeed, look at the percentage of the Saints’ offense Michael Thomas and Kamara made up last year. It was slightly over 50 percent. No one player is going to replace that production.

The dust is still settling around Kamara and the Saints’ messy Tuesday, but for now it appears things are back to normal. However, there’s a sense of uneasiness around Saints’ training camp now. The worst-case scenario for the Saints is likely that Kamara plays out the season and walks. A hold-out at this time doesn’t appear to be on the table, as Kamara has still been involved with team activities. But letting a talent like Kamara walk for nothing would sting even worse than letting Ingram sign with the Ravens, as even that was done with the tacit implication it meant Kamara was part of the long-term plan.

With regards to the major offensive pieces last year, Thomas already got his major deal. It felt like Kamara was just waiting in the wings. It would be disappointing to see Taysom Hill, as versatile and talented as he is, end up being valued more than Kamara by the Saints’ front office.

The clock is ticking for the Saints at this point, but they have some things working in their favor. They can continue negotiations into the season, for starters, and they can let some other major contract chips fall. It’s entirely possible Loomis is working on some other extensions and restructures at the moment, which could also massage next year’s difficult cap situation.

It’s hard to imagine a situation in which the Saints just let Kamara walk. He’s shown too much talent for that, and for a team that values its draft picks the way the Saints do, it’s almost a ludicrous thought. however, if the cap situation proves to be completely untenable, Saints fans could have a long season ahead of them as the shroud continues to grow.