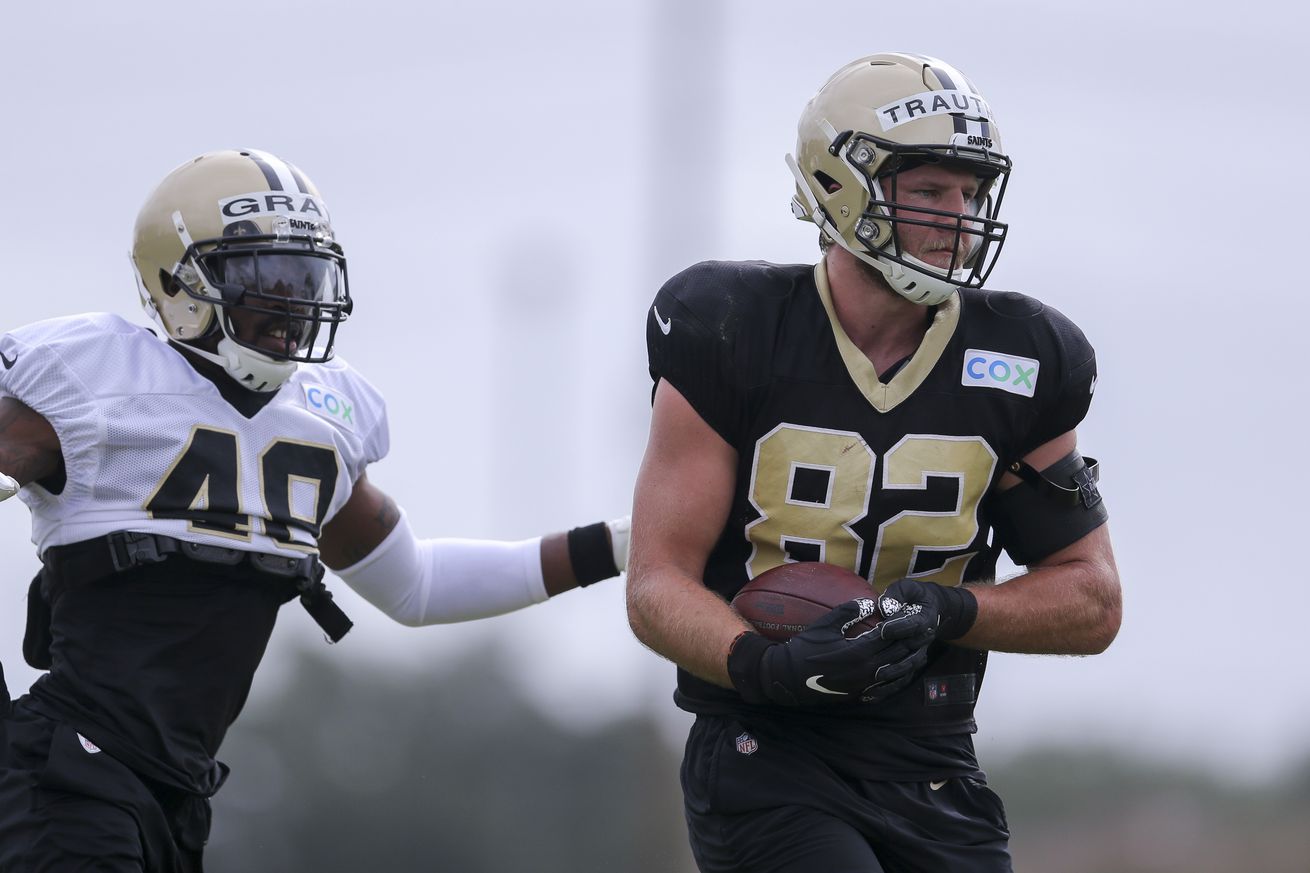 Trautman is already being recognized for what he brings to the New Orleans Saints.

If there is one thing that can be guaranteed about the Saints offense, it’s that any player has the potential to contribute from anywhere on the field. This has been true for the entirety of the Sean Payton era which began in 2006. Undrafted free agents like Pierre Thomas and Lance Moore played pivotal roles in securing the franchise’s first Super Bowl. Seventh-round draft picks out of Northwestern and Hofstra (which doesn’t even have a football program anymore) become career-long Saints and contributors. Every player has the potential to be something special in New Orleans. Even a quarterback whose torn labrum threatened his career and forced other medical staffs to advise teams against signing him. Thanks Miami.

The excitement this year continues around the tight end position. The Saints have driven interest here before with players like Jeremy Shockey, Coby Fleener, and most recently Jared Cook. However, with all three of them being veteran free agent signings, there is a familiar but rare circumstance present heading into 2020.

The Saints traded away their entire stock of day three NFL Draft selections to move back into the third round and select Dayton tight end Adam Trautman. Trautman stands at 6-foot-5, 255 pounds. Trautman’s physical build and draft position remind New Orleans Saints fans of only one name: Jimmy Graham. Sports Overtime host Nader Mirfiq asked Trautman about the comparisons and how he believes he’ll be used in the Saints offense.

Part 2 of our interview with Saints new TE Adam Trautman. As a former basketball player the last TE the Saints drafted who was a basketball player was Jimmy Graham who also was selected in the 3rd round. I asked Adam how does he see himself being used in the Saints offense? pic.twitter.com/EFCrzUeudY

It feels like the third-round pick’s usage may be a bit different to kick off his career, but the future is bright and the path is paved. While the most popular combine drills show greater speed and explosion from Graham, Trautman’s short area-quickness and change of direction ability are very impressive. Not to mention his college production, where Trautman is leaps and bounds ahead both as a blocker and receiver.

It is important to remember the context that Jimmy Graham’s original collegiate sport was basketball. He only played football at the University of Miami his senior season before entering the draft. Earlier we referenced that any player could pop in the Saints offense. It should be no surprise that they found a way to turn a college basketball player with 17 career receptions into one of the most productive NFL tight ends in league history. Now, they welcome in Trautman who, even though from a small school, has played 31 more games than Graham and caught 70 passes for 916 yards and 14 touchdowns in his senior season alone. Trautman totals 178/2,295/31 over his career. He also has a basketball background, but with a greater focus on football in college.

This level of production has already driven us to question his chances as offensive rookie of the year here at CSC. The only tight end to ever win the Associated Press award is Mike Ditka who won it in 1961. We’re not the only ones giving the former Dayton Flyer a longshot chance, though.

Trautman has been on the board for the OROY all summer, though his odds to win it were averaging at +11250 in late July and have since moved to +15000. His initial odds from late July would have given him the second-best odds amongst tight ends in 2018 behind only the Eagle’s Dallas Goedert (+7000). However last season, he would have fallen behind all three tight ends to make the board; T.J. Hockenson, Noah Fant, and Irv Smith, Jr.

Trautman is being viewed as a potential star in the New Orleans Saints offense. It won’t come easy. As he has to prepare for a large leap in competition from Atlantic 10 Conference to the NFL. But his willingness to block, which was not present in Jimmy Graham’s game, should get him on the field quickly. Thus putting him in position to produce early. Even though he may not walk away with offensive rookie of the year honors, he can still be a big-time producer on Poydras and beyond. If the Saints can take a receiver from Hofstra and turn him into the best wideout never selected to a Pro Bowl to the play the game, they can get something special from Trautman, his skillset, physical profile, and mental make-up.