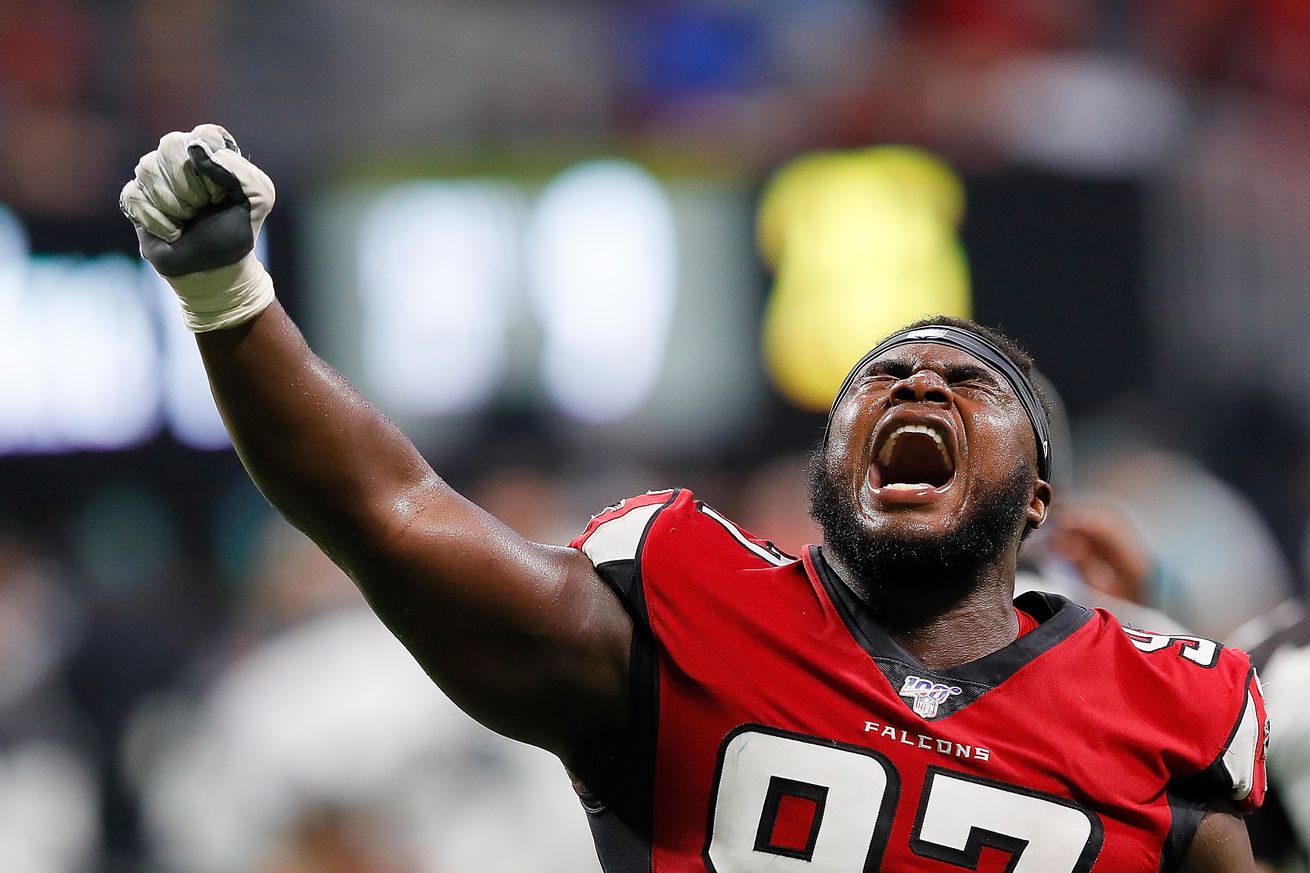 Grady Jarrett is going to a problem for the foreseeable future

Sports stop to address social justice issues. The Falcoholic discussed how this past week, multiple pro sports stopped play to focus on the shooting of Jacob Blake in Kenosha, Wisconsin. Yes, sports are a haven where we go to escape. But from the likes of Jesse Owens, Jackie Robinson or Muhammad Ali, history has shown that sports can also be a great place to start meaningful change.

Oddsmakers not big fans of the Falcons. Despite a few notable additions this offseason (Todd Gurley, Dante Fowler Jr.) and the return of injured starters like Keanu Neal, the Falcons over/under for next season has been set at 7.5 wins. Not a ringing endorsement for Atlanta, despite having a very talented roster.

Grady Jarrett is Atlanta’s most important defensive player. A fifth round draft pick of the Atlanta Falcons in 2015, Jarrett has become an incontournable piece of the Falcons’ defense from his defensive tackle position. At only 27-years old, Jarrett will likely anchor the Falcon’s defense for a few years to come.

Should Bucs go after Earl Thomas? The talented, though aging safety is on the market again after being released by the Baltimore Ravens. Thomas was released for behavior detrimental to the team in Baltimore, but you can bet that his talent will be enough to entice many teams.

Three Patriots Plays for Tampa. An interesting film study of three plays that the Pats used to run with Brady, and that our friends at BucsNation wouldn’t mind seeing implemented into Tampa Bay’s playbook.

Bruce Arians denies talks of trading O.J. Howard. Whether it’s coach’s speak or just a ploy to make sure Howard stays fully engaged as the team prepares for the upcoming season, Arians says that the Bucs never intended to part ways with the young and talented tight end.

Expectations remain low for the Panthers. The Sporting News put out their prediction for the 2020 NFC South and the Carolina Panthers bring up the read with a 5-11 record. What might surprise some is that SN has the Bucs winning the South at 12-4, with the Saints coming in second at 11-5.

Panthers waive running back Jordan Scarlett. Before he even starts his sophomore NFL campaign, the Panthers released their 2019 fifth round selection. Letting a player go this early are the kind of draft mistakes that poor teams make. However, Scarlett was also a product of the Rivera regime, and Matt Rhule is certainly eager to get his own players on his roster.

Get to know Jeremy Chinn. The Panthers drafted heralded defensive tackle Derrick Brown out of Auburn in the first round of the 2020 NFL draft. In the very next round, they picked up a much lesser-known prospect with the 64th overall pick, Jeremy Chinn, a strong safety from Southern Illinois (where?). When asked about Chinn however, Matt Rhule hinted at the fact that the rookie defender not only will play, but maybe start from day one on the young Carolina Panthers defense.