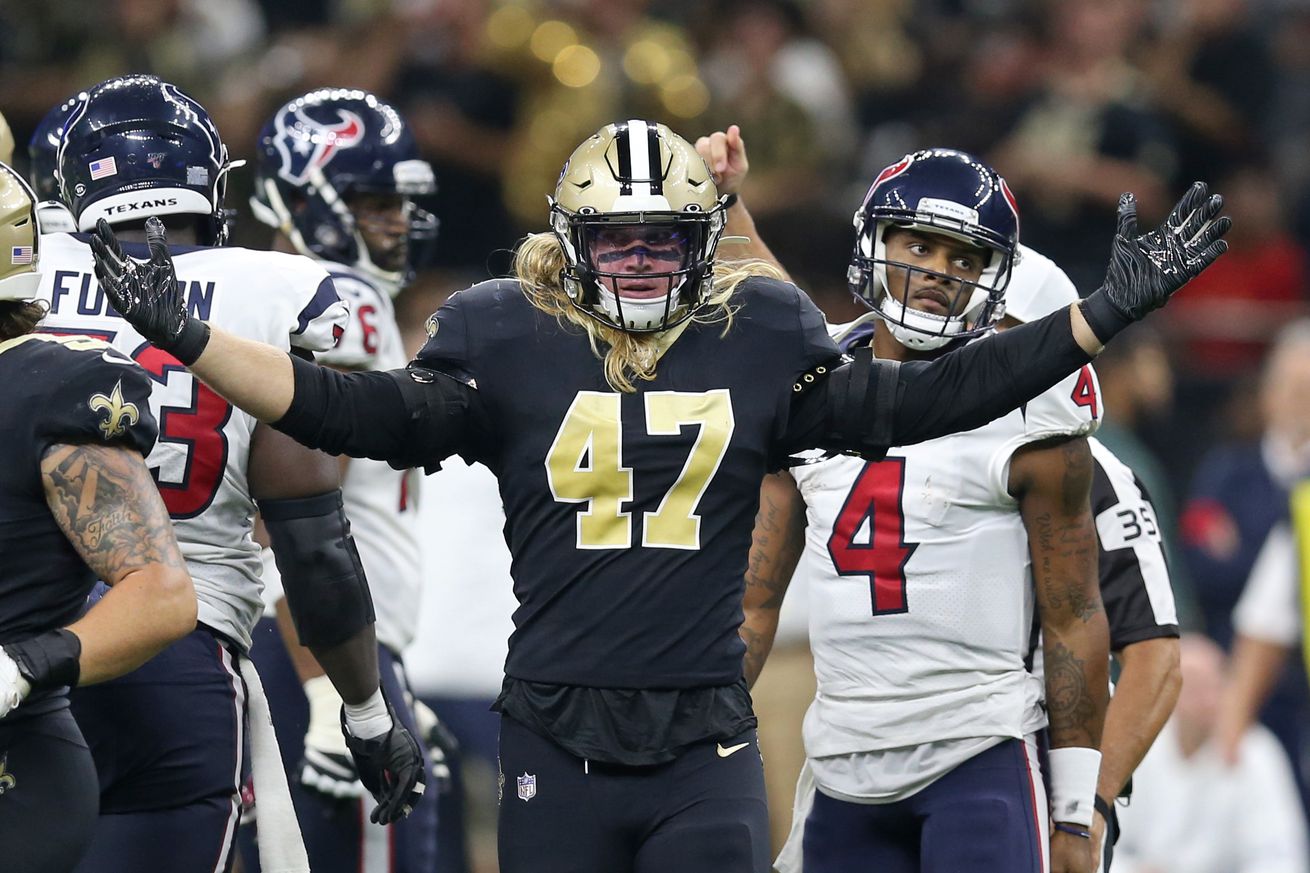 Alex Anzalone is a perfect fit in Dennis Allen’s defense, if he can just stay on the field in 2020.

Linebacker is a position for the Saints that has been very feast or famine over the years.

NOLA has run through countless linebackers since the days of Jonathan Vilma, and even all the way back to the coveted Dome Patrol squadron. Failed projects like Stephone Anthony and James Laurinaitis, as well as placeholders like Manti Te’o, Craig Robertson and AJ Klein, come to mind when reminiscing on the past few years of production from that position group.

The Saints front office finally found a difference-maker in All-Pro Demario Davis at weakside backer, but everyone knows you need more than one good linebacker. And while Klein has manned the middle LB spot for three seasons in The Big Easy, it’s time for an upgrade

If he can manage to stay healthy, Alex Anzalone can be that upgrade.

Now, this is a big “if,” despite Anzalone tweeting out an update that he should be good to go for the 2020 offseason, after suffering a season-ending shoulder injury. The Advocate’s Luke Johnson confirmed that the tweet was in fact addressing his health.

If it wasn’t 100 percent clear, I did confirm that this tweet means Alex Anzalone is fully recovered from shoulder surgery. https://t.co/iQMwv4d36Y

While this is a good sign, A-A has a long list of shoulder injuries dating back to his days as a Florida Gator. His health will continue to be worth monitoring moving forward.

When Thor is on the field, however, he has traits many defensive coordinators covet. His athleticism instantly made him a positive-contributor in coverage and as an open-field tackler, as a rookie.

With pick 76 in the 2017 NFL Draft, the #Saints selected Alex Anzalone, LB, Florida.

Anzalone’s three-cone and 40-yard dash times were top-five marks among his position group at the 2017 Combine.

Before an injury against the Dolphins in Week 4, he flashed these abilities, including the play he was injured on.

Check his pursuit of speedster Kenny Stills on the screen pass, leading to a shoestring tackle that prevented a positive play.

His agility, burst and closing speed in the open field have always been evident. He just looks fluid out there.

Let’s take a look at another play from his rookie year.

On a crucial third down in his first NFL game, he’s lined up on the line of scrimmage and has to drop back to cover the middle of the field in a goal line Cover 2 zone look.

First, he has to read the switch/pick route from the two slot receivers, then he matches up with Pro Bowler Adam Thielen. The play breaks down, and he has to stick with Thielen as he breaks off from his hook route.

He stays in his hip pocket and breaks up the pass to force a field goal.

This is why Anzalone adds such a needed element to Dennis Allen’s defense. In Allen’s scheme the Saints play more Cover 2 zone than most teams, and that means you need a middle linebacker with supreme coverage abilities to carry tight ends and slot receivers down the middle of the field.

Here is AJ Klein attempting to man the middle zone in a straight Cover 2 look during the Saints Week 4 matchup with Dallas.

To be fair, Klein actually did force a huge fumble in coverage earlier in this game, but even that was from behind after he’d been beaten and outran on a dig route by Jason Witten.

The league has trended towards versatile, athletic linebackers who can match up with tight ends and running backs in man coverage and drop back in zone. Anzalone fits that mold to a T.

We saw him flash his rookie year, but he put on a more complete display in his sophomore campaign.

In 2018, Anzalone played all 16 regular season games, with an increasing snap count as the year went on. He notched an overall Pro Football Focus grade of 70.5, and a coverage grade of 72.0.

His 8.1 yards per catch allowed was tied for 12th lowest among qualifying linebackers, and he didn’t have a game allowing more than 28 yards receiving in his coverage.

The hip fluidity in man coverage was there.

The pursuit ability to rally and tackle underneath after dropping back in zone was there, too.

He even made a positive impact as a pass-rusher on blitzes. He recorded 15 regular season pressures and two sacks, to go along with a PFF pass-rush grade of 76.4.

While he’s no Demario Davis in run support, Anzalone will fill necessary gaps and do his job in that area. Even if he gets knocked backwards in the process.

The defining play of his 2018 season, however, came in one of the biggest games of the year: Week 9 vs. the Rams.

The Saints had just taken a 14-point lead towards the end of the first half, and the Rams had plenty of time to score before the half ended. On the first play of the drive, they ran one of their staples: the dagger concept.

The scheme is pretty simple, yet effective. Against a zone coverage, the slot receiver will run a short (5-yard) hook to occupy the underneath coverage, with a 10-15 yard dig route behind it.

If the underneath curl/hook defender bites down on the hook, throw the dig over his head. If he floats back to the dig, dump it off to the hook for a 5-10 yard gain.

The Rams ran it countless times, with or without play action, to perfection in 2018. But this time, Anzalone read it like a book

The Saints are in a Cover 3 zone coverage, and Anzalone is the underneath curl defender to the field side. You can see him recognize the route combination, and he knows the dig is coming behind him.

He takes a step towards the underneath hook, which causes Goff to go to his corresponding read, the dig.

You see Goff loading up to throw the dig, and as soon as he does, Anzalone makes a hell of a break on it. The fingertip catch is just as impressive.

It was almost as if he baited Goff into throwing the dig. After the game, he described how he read the eyes of Goff.

“I was just in a normal curl drop,” Anzalone said. “There was a dig right behind me, and that’s a play a lot of teams hit. I was able to read the quarterback’s eyes, break on the ball and make a play.”

It’s a play not many players are physically capable of making.

The way the 2019 season ended for Anzalone was disappointing, to say the least. But he’s back healthy now, and entering the final year of his rookie deal.

If he can stay on the field and pick up where he left off in 2018, the Saints front office would be hard-pressed not to consider handing him a second contract.