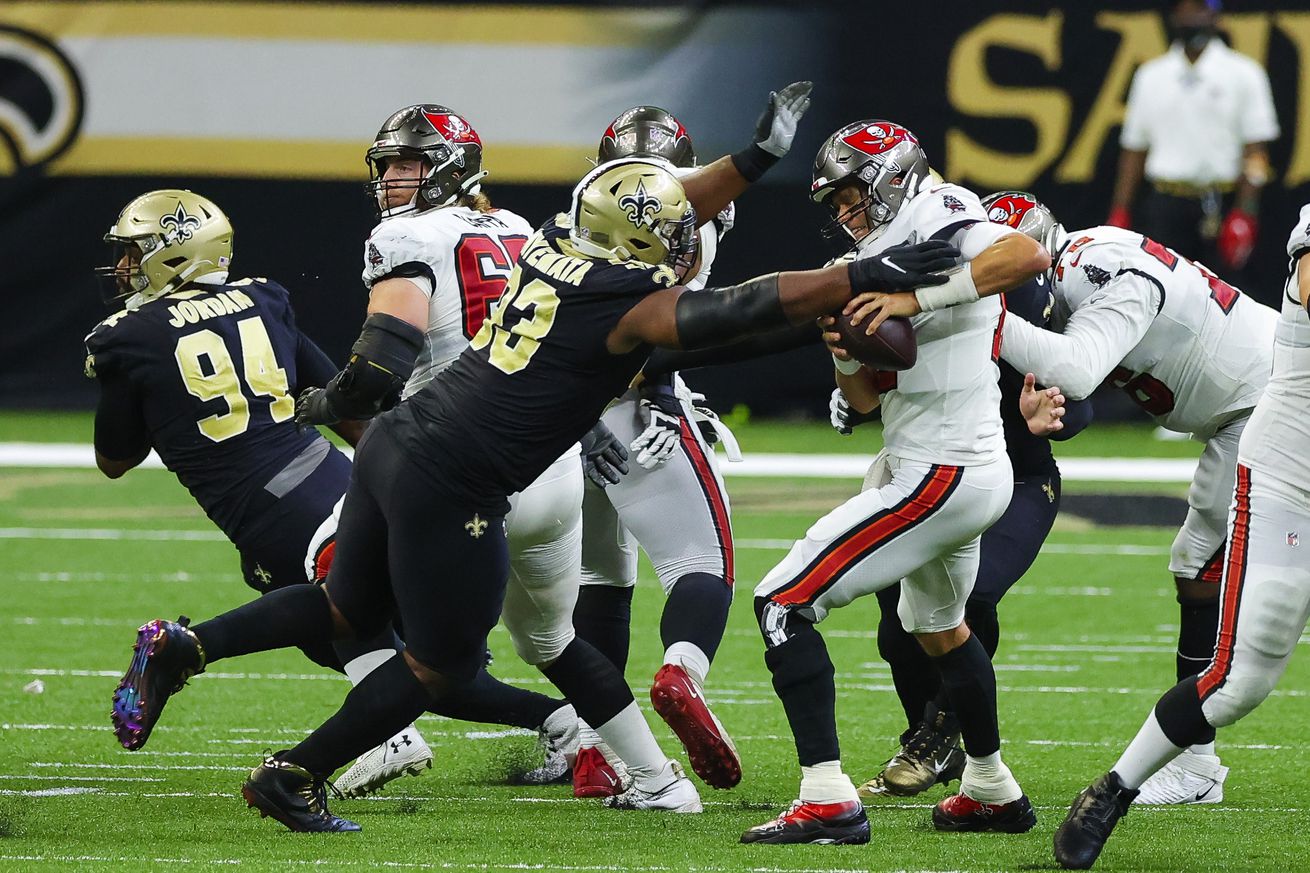 The New Orleans Saints sit alone atop the NFC South standings after a Week 1 win on Sunday. Here are three takeaways from the game.

The New Orleans Saints have won their Week 1 game for the second year in a row after six years of disappointing starts to the season. Arguably the game of the week, two legends in Drew Brees and Tom Brady duked it out in what would ultimately be a 34-23 Saints victory. There is a lot to dissect from the performance; here are my three biggest takeaways.

Saints Defense was the Star of the Show

Heading into the game, the narrative was that the game was going to be a matchup between two gunslingers in Brees and Brady. Instead, the two quarterbacks combined for 399 passing yards. The game was won in the trenches and ultimately was decided by some key defensive plays by the Saints.

New Orleans was able to get to Brady, ultimately sacking him three times and forcing him into uncomfortable situations. Brady became noticeably upset when play after play was blown up by the Saints defense. New Orleans was able to take advantage by securing two interceptions, one of which was returned for a touchdown by Janoris Jenkins. Brady, one of the most prolific passers of all-time, was held in check all afternoon and only managed 239 passing yards with two passing touchdowns and two interceptions.

The offense was clearly not firing on all cylinders on Sunday afternoon and the defense needed to step up to help fills the gaps. Rather, the defense was the driving force behind the victory, and the offense simply played a complimentary role. The lack of offensive production isn’t something to worry about just yet, but knowing the defense can carry this team has to be one of the biggest takeaways from the game.

You hear it all the time: the key to winning is playing well in all phases of the game. That means the offense, defense and special teams are all clicking at the same time. We touched on the defense, and the offense was lacking, but the special teams did an incredible job at helping secure the win on Sunday.

Margus Hunt, who was called up to the 55-man active gameday roster from the practice squad, blocked a Buccaneers field goal. It was just the start of what would become an incredible performance by the squad.

Fellow practice squad call-up Bennie Fowler was next on the docket for fantastic plays. Fowler recovered a kick-off and help set the Saints up for a Wil Lutz field goal in the fourth quarter. Fowler was praised by Brees last month after the veteran signed with the team following his workouts with Brees and Emannuel Sanders over the offseason.

Additionally, punter Thomas Morstead had one of the best performances of his career on Sunday. A usually unheralded position, Morstead pinned Tampa Bay in their own 20 five times and allowed ZERO return yards. Morstead’s phenomenal performance only added to the lethality of the unit.

In a day when the usually efficient and effective offense was totally silenced, the special teams unit came through and provided extra opportunities for the offense to score points.

The Offense Looked Sluggish but No Need to Sound the Alarm

280. That is how many yards the entire New Orleans offense was able to muster against Brady and the Bucs. Those 280 total offensive yards is a far cry from the Saints’ 2019 average of nearly 374 yards per game. The offense looked out of sync and the Brees to Michael Thomas connection was surprisingly quiet.

Head coach Sean Payton took a lot of the blame post-game by saying he put the team in undesirable situations. However, the lack of preseason games as well as an odd offseason has caused a lot of teams to struggle with timing and chemistry.

There were plenty of highlights that showed glimpses of what this offense is capable of. Alvin Kamara looked healthy as he scored two touchdowns; the first was a touchdown reception, the second a rushing touchdown. Tight end Jared Cook looked great and also seems to have picked up right where he left off in 2019.

Let’s give it another week, but despite a poor offensive showing against the Bucs, this team is still poised to have one of the most deadly offenses in the league this season.