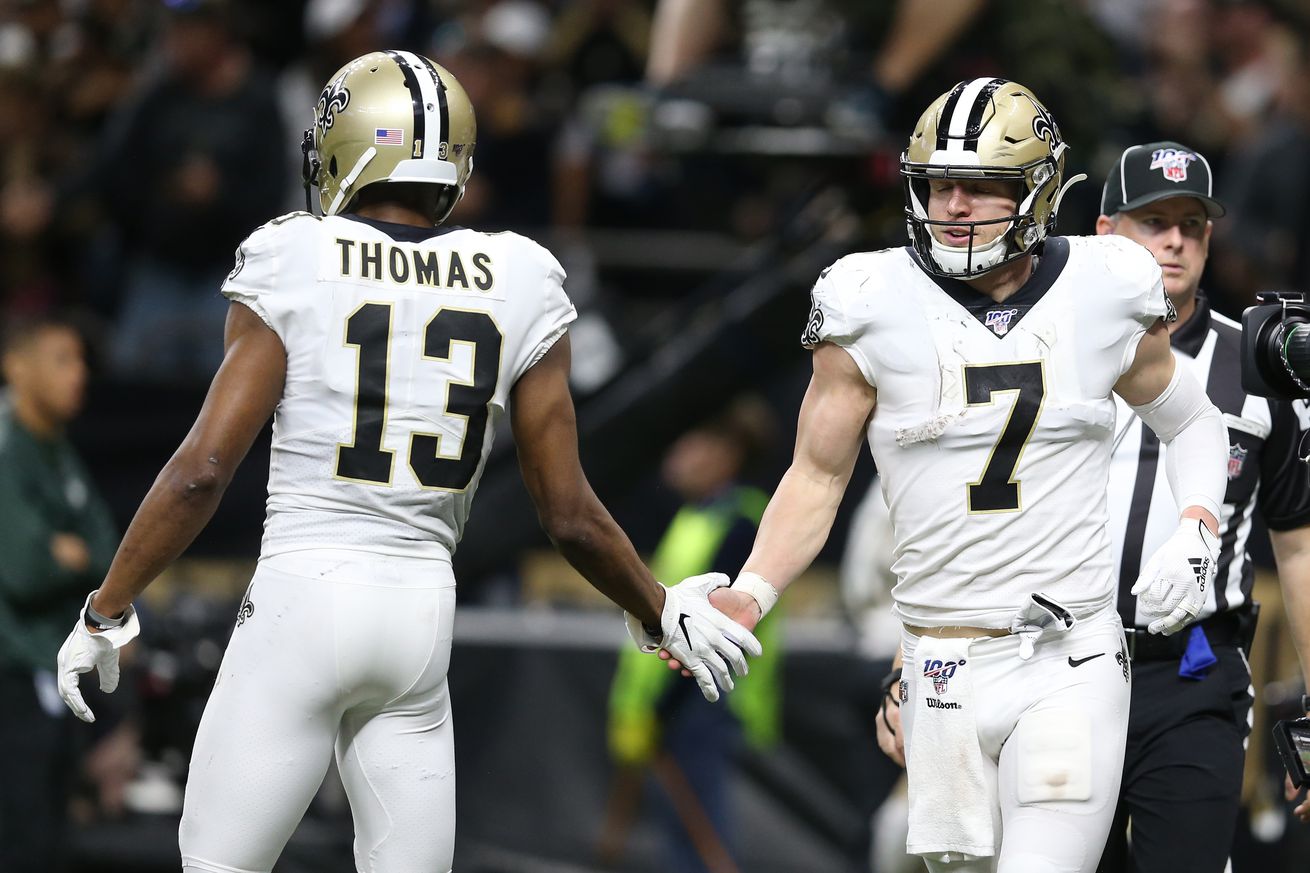 With the first New Orleans Saints game set to kickoff against the Tampa Bay Buccaneers just over a week away, it seems an appropriate time to make a few bold predictions for the Saints offense. Keep in mind these predictions are BOLD, but not out of the realm of possibility.

1. The Saints pass-catchers will set a franchise record in receiving yards

This prediction includes all pass catchers including running backs, tight ends and yes, Taysom Hill. The current record stands at 5,505 yards set in the record-breaking 2011 season. For this record to be broken, Brees and company would need to create more than 1,000 additional passing yards of offense from the 2019 season.

Can Brees find another level at 40-years old and break the team record? The quarterback has been working on his long ball this summer and from all accounts he looks great. Couple that with solid performances in practice where Brees is routinely throwing the ball downfield with precision. If he can stay healthy and maintain his fitness then that could be one part of the puzzle.

The next pieces of the puzzle is who is catching those passes from Brees. Michael Thomas will want to replicate his 2019 season in which he secured 1,725 receiving yards. The likelihood of him breaking his own record is small, but he should once again get relatively close if he stays healthy. Emmanuel Sanders was a big pick up for the Saints in the offseason. He immediately slots in as WR2 and if he can produce even at his career average of 789.3 receiving yards/season that would give a huge boost to the offense in making up some of the difference in the air.

One would be remiss to overlook Alvin Kamara’s role in the offense. Despite his contractual drama, Kamara is almost a lock to start Week 1. The Pro Bowl running back has helped the offense become one of the most efficient in the league since his arrival. At 100% health, Kamara could potentially catch 100 balls from Brees this season making the prospect of breaking 5,505 yards that much more achievable.

Finally, tight end Jared Cook and Swiss Army Knife Taysom Hill add an additional wrinkle to the offense that has been missing since Jimmy Graham left for Seattle. Cook looked great in the second half of 2019 after getting on the same page as Brees. Hill has been a massive contributor and could see a significant chunk of the passing yards needed to break 5,505 yards this season.

2. The Saints offensive line will give up fewer than 20 sacks

New Orleans had only given up 12 sacks through Week 8 of the 2019 season. Then, they met the Atlanta Falcons after the bye week and got dominated in the trenches. By the end of the season, the offensive line had allowed 25 sacks. This prediction is simple: The Saints offensive line will not give up more than 20 sacks all season.

It’s not an incredibly bold prediction until you look at how young the line is. A sophomore in Erik McCoy will likely start at center or guard and which ever one he doesn’t play rookie Cesar Ruiz will. Ryan Ramczyk is a lock for another phenomenal campaign. But, for this prediction to really hold true it’ll take tackle Terron Armstead to remain healthy thus making the line reliable. Furthermore, the need to keep Brees upright only becomes more pressing as he progresses in age. This line is built to withstand even the most formidable of defensive lines, something they will see many times in the 2020 schedule. Also, keeping Brees upright could be the difference in whether or not bold prediction number one comes to fruition.

3. Alvin Kamara will perform like a Top-3 running back

Drama has surrounded Kamara and his absences from practice earlier this week. It has been reported that the absence has coincided with the running back and his agent pursuing a lucrative extension. Nick Underhill has reported Kamara is seeking a contract worth north of $14 million+ per year while New Orleans has only offered around $12 million+ per year. The two sides are about $2 million apart per season which remains the sticking point.

I had been hearing it was about $2 million apart. There was a sense that while there was some push and pull it could get done.

For reference, Joe Mixon of the Cincinnati Bengals just signed a new 4-year, $48 million deal while Panthers running back Christian McCaffrey makes over $16 million per season. Kamara is seeking somewhere in the middle of the two, but New Orleans may be hesitant to dole out that type of money to a running back of any caliber, especially after a season riddled with injury. But this is where the bold prediction comes in. The Saints will get close to Kamara’s asking price of $14 million per season, but it just may not be this season. However, Kamara will prove he is worth the money as he will perform like a top three back in the league. The Pro Bowler will secure 100+ receptions and rush for over 1,000 yards which means he will have 1,700+ yards from scrimmage in 2020. Not only would this help push the first bold prediction narrative, but it will be the difference in why New Orleans wins a Super Bowl in 2020.