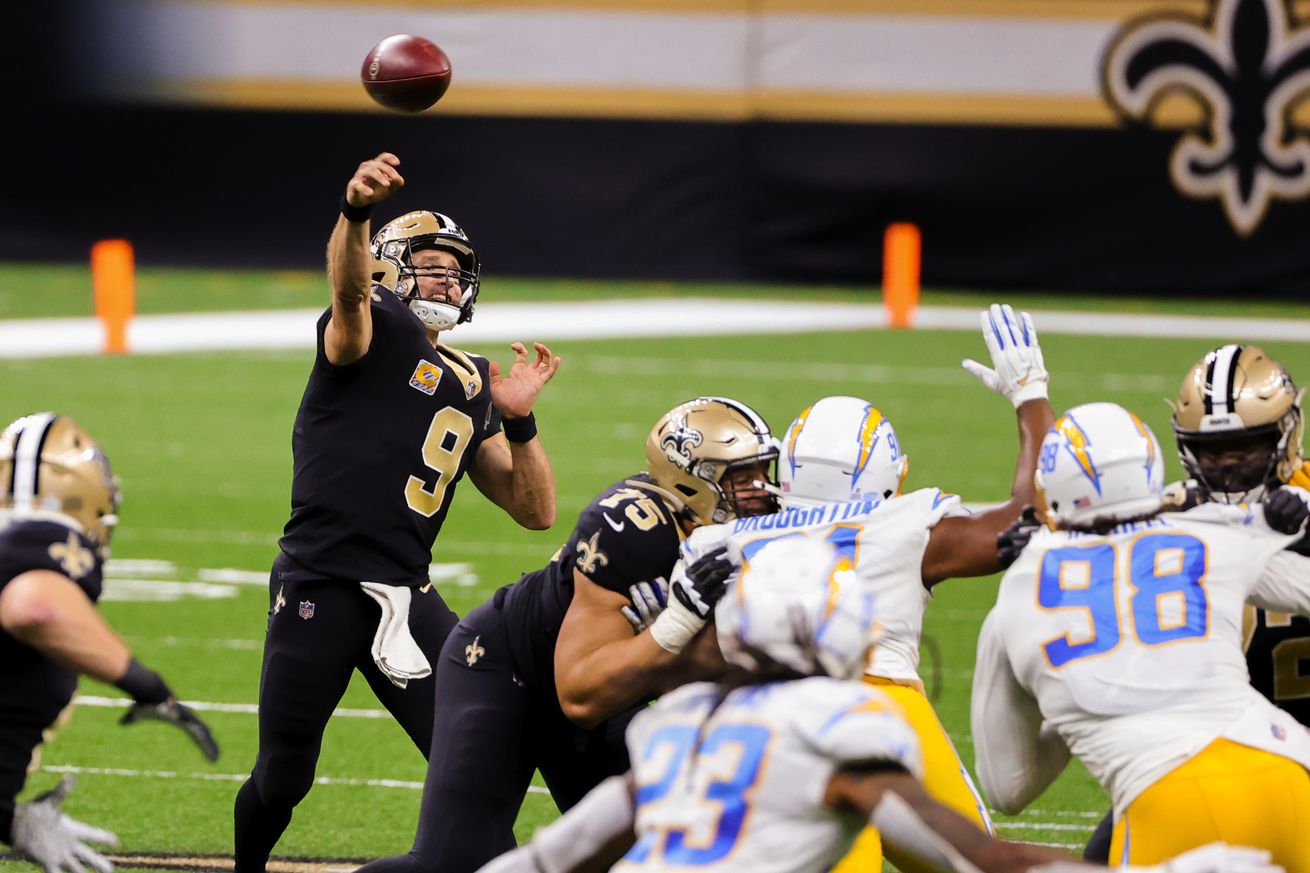 The New Orleans Saints barely edged out the Los Angeles Chargers in a 30-27 victory in overtime on Monday Night Football. The Saints were required to launch a 17-point comeback, the second largest of quarterback Drew Brees’s career, in order to secure a 3-2 record.

There were plenty of highs and lows that make up some of the biggest takeaways of the night. Brees looked good throwing downfield on Monday night while leading the team back. However, despite how well Brees was playing, head coach Sean Payton continued his obsession with Taysom Hill. Meanwhile, the defense has a lot to answer for.

We talked about this briefly last week, but the trend of Brees launching it further downfield has continued to trend in a positive direction. With the team down by 17-points, the veteran quarterback was tasked with launching the second biggest comeback of his career.

Brees was efficient in the second half, but what really stood out was the shots downfield for the quarterback. The veteran was 6/7 on 10+ yard throws from the line of scrimmage for 129 yards and a touchdown in the second half. Perhaps the most eye-opening throwing was the 41-yard touchdown pass to tight end Jared Cook to tie the game in the fourth quarter.

Brees uncorks one to Jared Cook for 6️⃣ pic.twitter.com/puUPOVpxyb

Brees was able to look off the safety just to the right and then throw a great pass to Cook. These were the types of throws that we thought Brees may never make again. It sounds dramatic, but seeing that type of throw was a breath of fresh air. However, despite Brees’s efficiency, he was pulled from the game in some of the game’s biggest moments, which leads to the next takeaway.

I overreacted about this yesterday, so I won’t do it in this piece. However, one thing is for certain, no matter how poorly Hill seems to play or how poorly his designed plays seem to go, Payton keeps going back to the well. This seems to be especially so in the biggest moments of the game.

I was and still am a big believer in Hill. His athleticism and versatility make this offense better, but only when utilized correctly. Unfortunately for both Hill and the Saints, the league seems to have successfully figured out how to defend him and his RPO plays over the last few seasons. Yet, Payton does little to change up how to employ Hill more effectively and he consistently pulls Brees in the biggest moments in favor of Hill. Monday night’s overtime drive was a prime example of when Payton pulled Brees on a third-and-short after going 5/5 on the drive. Hill came in, ran the ball, was stopped, and the Saints had to settle for a field goal.

Last night’s takeaway is that Payton seems to keep employing Hill because at some point he has to be right, stubbornly so. The second takeaway regarding Hill from last night is that he needs to be utilized differently and needs to adapt to the league’s ability to effectively defend him. Payton is an ‘offensive genius’ so being able to successfully employ a mega-athlete like Hill shouldn’t be too much of a challenge.

Wow. The New Orleans secondary was BAD. Yes, Marshon Lattimore made two ‘game-winning’ tackles in overtime to secure the victory. That is about where the positives end. Chargers rookie quarterback Justin Herbert threw for 264 yards and 4 touchdowns on just 20 completions. But hang on, those four touchdowns were actually a record for a rookie quarterback on Monday Night Football. Yikes. The bye week can’t come soon enough.

However, the defense wasn’t all bad. The defensive line played well, especially Trey Hendrickson who is really coming on. New Orleans was able to sack Herbert three times, had over 8 tackles for a loss and hit Herbert a total of 12 times. The pressure the defense was able to put on Herbert was impressive. Less impressive was the secondary’s inability to capitalize on it. Oh yeah, the Saints now sit at 48 straight games of not allowing an opposing 100-yard rusher. So like I said, not all bad.

This defense truly needs to get back on track during the bye, just like other facets of this team. Luckily, there is enough talent, in theory, in the secondary to be able to rectify the horrific play. It will have start at the top though.