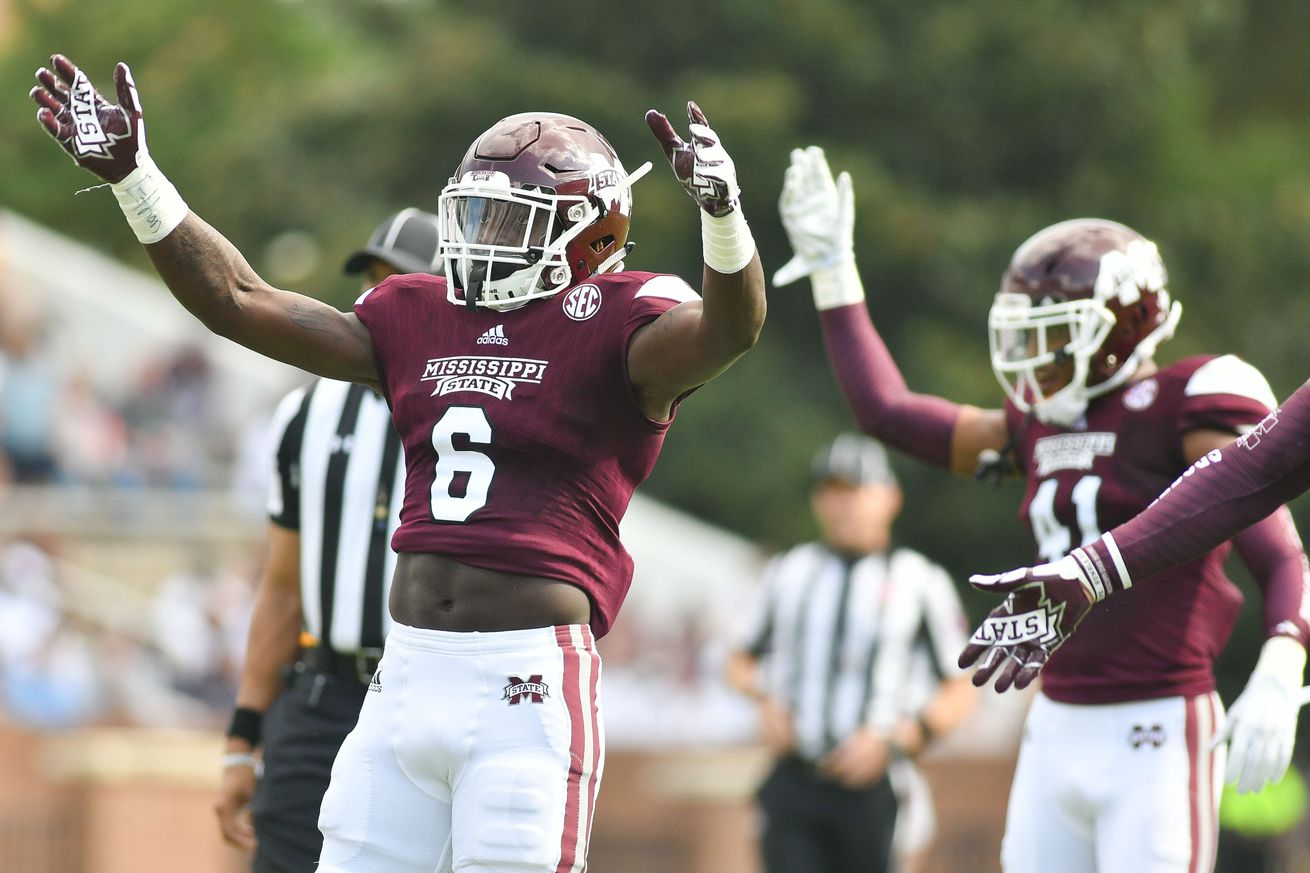 With the 2020 NFL Draft approaching, it is prime season for mock drafts and big boards. While these are always a blast to come up with, every year there are prospects who get pigeonholed into rounds and rankings that are lower than where they should be.

Whether it be poor combines, a lack of exposure or scouts and pundits’ misinterpretation of where value lies, diamonds in the rough get overlooked every draft season.

In this article, I try to identify these gems and figure out why they might be getting the cold shoulder nationally.

Without further ado, here are your 2020 NFL Draft sleepers.

Where I value him: Early second-round

Elliott started his career at Texas University, before transferring to Missouri and anchoring the 3-technique spot at defensive tackle. As a sophomore, he impressed with his ability to consistently beat blocks and penetrate into the backfield as a pass-rusher and run-defender.

However, he wasn’t a three-down player until his junior year in 2019. This is when he truly showed his dominance, leading all interior defensive lineman in overall Pro Football Focus grade at 92.4.

Elliott getting overlooked is a prime example of scouts and analysts putting too much stock into sack totals, as opposed to taking the entire body of work into account, by utilizing stats like pass-rush win rate and total pressures.

Take this play for example:

He does everything right. Comes off the ball quickly and hits the guard with a nifty swim move. But the QB throws the ball away as he gets there.

Is this play any less impressive than a sack for Elliott? Not to me. And these type of plays are littered all over his tape.

He only recorded 2.5 sacks in 2019, according to Sports Reference, but ranked fifth among qualifying interior defensive linemen in pass-rush win rate via PFF. He also recorded 34 pressures, which was 17th-highest among DI’s.

This number could’ve been even higher had he played more snaps, as 10 of the players with more pressures than him in ‘19 played at least 50 more pass-rush snaps than him. He ranked 11th in QB hits, as well.

Elliott used power to bully his way to QBs. He throws this right tackle to the side like a rag doll.

And he displayed a nice array of finesse moves, like this swim move.

While Elliott is just a good-not-great athlete, I see him as the third-best interior defender in this draft behind Derrick Brown and Javon Kinlaw, due to his combination of power and agility as a pass-rusher. He’ll be a steal if he falls past the second round.

Where I value him: Late first-round

Notre Dame edge rusher Julian Okwara burst onto the scene as a junior in 2018 with eight sacks, 12.5 tackles for loss and 61 total pressures (seventh-most among edge rushers) before returning for his senior year. In 2019, he was on his way to another resume-building season, before breaking his leg against Duke in Week 11.

Similarly to Jordan Elliott, Okwara seems to have dipped in some draft boards due to a lower sack total last season, despite annihilating blocks on a consistent basis. His pass-rush win rate of 23.3 percent ranked ninth among edge rushers in 2018 and dipped only to 22.3 percent (11th) in 2019.

In my book, that’s not much of a drop-off, just worse luck in the sack department. He still was affecting QBs and throwing off their rhythm by overpowering and out-maneuvering offensive linemen.

The first thing that pops out when watching Okwara is his explosiveness. He’s about 250 pounds, but he catches blockers off-guard with just how quick his get-off is.

Watch him bully Clemson’s right guard (who’s got over 70 pounds on him) for a pressure on Trevor Lawrence in the 2018 College Football Playoff to force him into a bad throw on third down.

He also displayed top-tier athleticism when rushing from the edge, utilizing swim and rip moves. Watch the ability to swat the Virginia right tackle’s arms to the side, while keeping his balance and dipping under his shoulder here.

Don’t try to chip or block him with tight ends, fullbacks or running backs, because he’ll abuse them.

Okwara’s only real weakness would probably be his run-defense. Sometimes he looks uninterested and gets pushed off his spot when he doesn’t have a clear path to the ball-carrier.

But as far as rushing the passer, he’s got top-notch abilities and potential.

He’s a first-rounder in my book, and if he falls to day two in the draft, some team is going to get really lucky with Okwara.

Tankathon Big Board Rank: Not listed in top 100

Where I value him: Early third-round/late second-round

Willie Gay has had quite the tumultuous career at Mississippi State, to say the least.

He’s been suspended multiple times, for incidents like cheating on exams.

Mississippi State’s Willie Gay Jr. said he was suspended eight games in 2019 for cheating on a test in a chemistry class.

He said he’s learned from the experience, has told teams he’s ready to be a pro at the next level.

He also was rumored to have punched a teammate. Both are good ways to find your way off the football field, like he did in last year, playing in only five games.

But when Gay has been on the field, he’s been electric.

The closest thing to a full season he played was in 2018, when he played in 13 games and recorded two interceptions, 17 QB pressures and five sacks.

He also had an elite PFF coverage grade above 90.0 in each of the past two seasons, both top-10 figures among linebackers. He even put up an 87.1 coverage grade in his limited snaps as a freshman.

He displayed his coverage skills on his very first play back in 2019 vs. Kentucky.

(I miss football so much) pic.twitter.com/DTMw4tTx1q

Gay shows not only speed in coverage, but instincts to boot. He has a good feel for receivers behind and beside him, and has the quickness to pounce on routes and force turnovers/incompletions.

He’s an absolutely absurd athlete, as he showed at the combine.

If it weren’t for Isaiah Simmons, his combine performance would be getting much more hype for its ridiculousness. His 10-yard split, 40-yard dash and broad jump were all in the 99th percentile.

Coming into 2019, Gay’s biggest concern was his run defense. He regularly over-shot gaps and missed assignments in that regard. PFF graded his run defense at 56.4.

However, in his five games of play in 2019, that grade improved to a 70.4. His improvement in that area was exemplified by him using his elite speed to out-run ball-carriers to the edge.

While this is a small sample size, it’s really all I needed to see. Gap integrity and patience when defending the run can be taught, but his athleticism and fluidity in coverage cannot.

Gay has first-round talent, but the off-field concerns will keep teams weary. If he can clean up those issues (by, I don’t know, not punching his teammates), some team could be walking away with a high-end starter in the second or third round.

Tankathon Big Board Rank: Not listed in top 100

Where I value him: Late second-round

Stone is honestly a strange case to me. He became a starter about five games into his sophomore year, and has been a versatile deep safety who consistently prevents big plays ever since.

I really don’t get why he’s so low on so many people’s boards. His combine wasn’t spectacular, but it wasn’t bad enough to wash away how good he was in college.

As a sophomore he allowed the second-lowest yards per coverage snap among all qualifying safeties, at 0.07(!!), to go along with four picks. And that was on 347 coverage snaps. Not the smallest sample size.

Watch him drive on this dig route from his deep-middle zone and pick off Trace Mcsorely for the pick-six.

That’s a great read and play on the ball, against a good quarterback.

His play took a slight step down as a junior, only picking off one pass and allowing 0.37 yards per coverage snap (still better than Grant Delpit), but it’s not like he completely fell off.

He allowed a measly 8.0 yards per reception and only 60 yards after the catch, added onto a 61.1 allowed completion percentage.

He broke up three passes and tied for the 20th-most coverage stops, with 11. He takes great pursuit angles and tackles well in open space, which is why his YAC, yards per catch allowed and coverage stop numbers are so good.

Frankly, I don’t care that he ran a 4.62 in the 40-yard dash, because his speed shows up on the field. He covers up ground quickly and rarely allows things to get behind him. He also reads the quarterback’s eyes well, and breaks on balls.

The one knock on Stone is probably his lack of versatility. He played almost exclusively zone coverage at Iowa, and wasn’t really a great box safety vs. the run.

But he did play 142 slot snaps as a junior, showing growth in the versatility department.

Nonetheless, I’ll take his coverage skills and instincts any day of the week. Pick him up on day two and slot him into a zone-heavy defense, and you’ll be glad you did.

Where I value him: Late first-round

This one is probably less of a sleeper than just a player I really like. He’s a bit underrated in my book, as you can see by the Big Board rankings above, but not nearly as much as a guy like Geno Stone.

The three-year corner from Utah has garnered starter-level playing time since his freshman year. He played over 500 snaps as a frosh and over 680 snaps in both of the following seasons.

His play improved in every single one of those campaigns too.

Here are the combined pass-breakup/INT numbers from Johnson’s freshman-junior seasons:

He racks up these numbers by being one of the most advanced corners in this class as a route-diagnoser. Take this pick vs. Washington’s Jacob Eason for example:

After the game, Johnson explained that he recognized the formation and was expecting the stop route, before pouncing on it. This type of mind-set is what you want from a corner in the first round. There might be cover-guys in this class who are more athletic and physically imposing, but I’m not sure there are any smarter than Jaylon Johnson.

HIs physicality after the snap might get him in trouble with a few flags in the NFL, but more times than not he’s going to deflect his fair shares of passes and prevent a ton of quick routes from getting anywhere after the catch

You can live with a few penalties when the kid hasn’t allowed a quarterback rating above 57.6 when targeted in any season in his collegiate career.

While Johnson isn’t the most explosive athlete, he’s plenty athletic enough to not be a liability.

These numbers aren’t anything special, but they’re also nothing to get worried about. Trust what you see on tape with Johnson, like he does when he’s scouting opposing offenses.

All in all, Johnson can be inserted into a lot of NFL defenses and hold his own in press-man coverage, as well as most zone schemes. He’s not going to be a guy you leave on an island repeatedly, but he could come be my no. 2 corner any time.

If he falls out of the first round, I guarantee there will be some team that regrets it.