The number of recorded COVID-19-related deaths in the UK and Wales has risen for the fourth week in a row, according to official figures.

The Office for National Statistics (ONS) said a total of 321 Corona virusRelated deaths have been recorded for the week ending October 2nd.

This is the highest number since the week ended July 10 – and has risen from 215 deaths per week to September 25.

Use the Chrome browser for a more accessible video player

There were 139 people in the previous week COVID-19Related deaths were recorded, before which it was 99.

More than 58,500 corona virus-related deaths have now been reported in the UK.

A total of 106 deaths were recorded in the Northwest during the week ending October 2.

ONS data shows that this is the highest number for the region since the week ended June 26.

There were 40 deaths in the Northeast – this week from June 12 this area is high.

In fact there was a one-week hike in all but two regions of the UK, with the only exceptions being the West Midlands and the South West.

In Wales, the weekly total increased from 12 to 25.

Use the Chrome browser for a more accessible video player 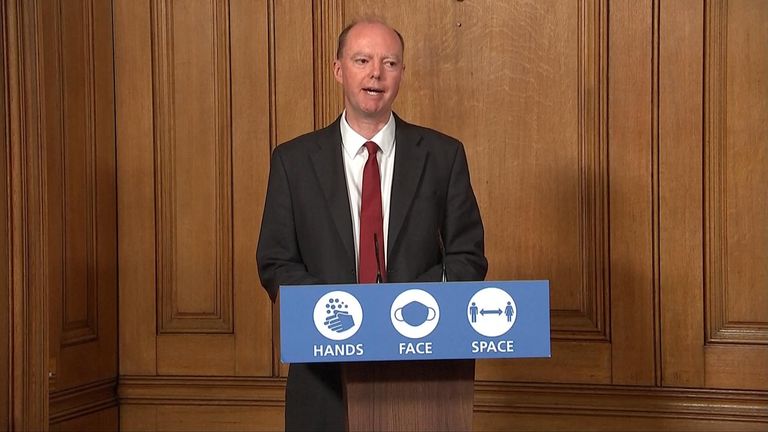 ‘Layer 3 is not enough to own’

The middle class maintains current national controls, high-risk areas will see homes that are prohibited from mixing indoors, and will see stricter restrictions, including closing third-tier pubs – if they can no longer function as a restaurant.

“We may still have to go More than we announced, ”Housing Secretary Robert Genrick warned this morning, echoing the warning of Professor Chris Witty, the UK’s chief medical officer. New restrictions “not enough” To reduce corona virus infections only.

Mr Johnson, surrounded by his principal Rishi Sunak and Professor Witty ahead of the Downing Street news conference, said there were now more COVID-19 patients in UK hospitals than on March 23 – the country was locked up.

He warned that the number of corona virus cases had quadrupled in four weeks across the country and deaths were on the rise.