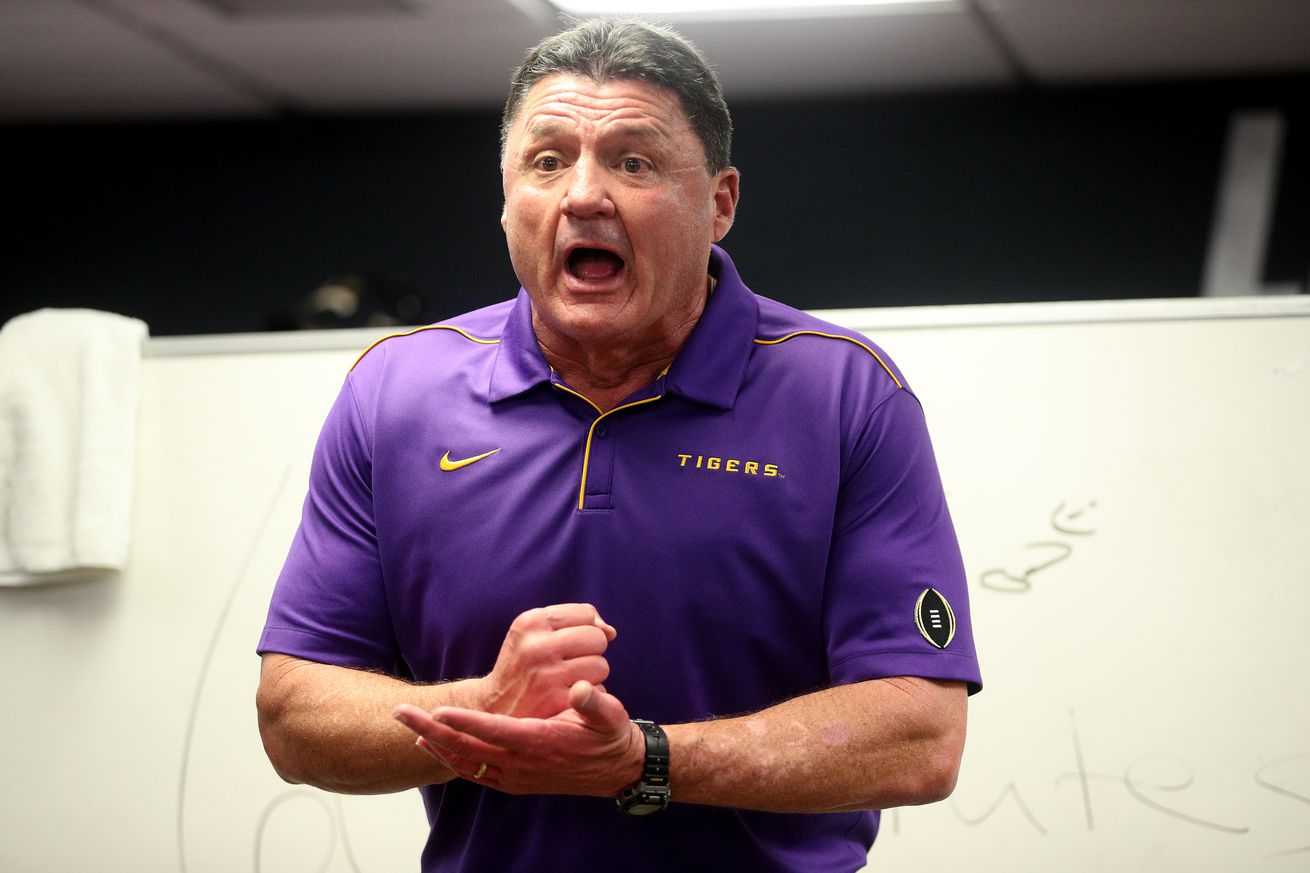 WHO WANTS A PIECE OF COACH O

The idea of Coach O, a massive, barrel chested, red faced Cajun man fueled by Monster Energy drinks learning the finer points of fighting is downright terrifying. It’s like in “Harry Potter and the Order of the Phoenix” when Dudley picked up boxing and Harry thought “ah shit this massive kid knows how to punch with precision now?”

Harry was not remotely afraid of his cousin anymore but he still didn’t think that Dudley learning to punch harder and more accurately was cause for celebration.

So I got to thinking: what if something derails the college football season and the only way to determine the results of LSU’s 2020 season was if Coach O fought the 10 head coaches on its schedule? How would those guys do? I put out feelers to various friends of the And the Valley Shook to get to the bottom of this.

You’re more likely to find Leach in a library than a gym. My mans doesn’t exactly seem like a pillar of physical fitness.

Have to agree with Rivers here. Leach may be a pirate but he doesn’t seem to be a brawler. If this was debate club maybe, though I still think I’d take Coach O because I imagine O would take the podium and throw it at Leach.

Maybe, but Coach O has a significant reach advantage in that fight, Mason is about 5’8.” When you watch Vandy enough you notice that he’s shorter than all the players but doesn’t wear lifts like Saban.

Derek Mason, I think, could give O the best fight. Short guys are notoriously scrappy. But as Tom points out, the lack of reach probably ends up being Mason’s undoing.

No doubt in my mind. Drinkwitz is like the youth pastor who is trying to be cool and hip with the kids

Christina’s absolutely right here. You kidding me? This guy is going to beat up Ed Orgeron? Please.

“Dan Mullen has famously said that he’s so competitive that he’d try to kick an opponent’s ass in thumb-wrestling, and he’s got the square-shouldered stance of a brawler.

But while he’s more than a decade younger than Coach O, he’s also built more like a marathoner than a mauler, and I think I’d go with a valiant defeat, if one that might go to a decision, unless he has the sense and chops to spend the whole match dancing and feinting.”

Dan Mullen and his offenses have given LSU fits for years and I imagine Ed Orgeron would channel all that frustration into a round-one knockout.

I mean you saw what Muschamp did to that whiteboard at Texas, i feel like he has a fighting chance (no pun intended but always pun intended)

I think Will Muschamp is a crazy person and that could make things interesting if he and Orgeron fought. But I think O is such a physically imposing figure it would all be for naught and eventually his size would overwhelm Muschamp like when Ash Ketchum’s Muk body slammed Jeannette’s Bellsprout.

Gus has reach. If he can keep O off of him I think he could survive a few rounds.

“I feel like Coach O would be a brawler. He’d rely on physicality to try to out punch you in the early rounds. If Gus can make it to Round 3, I think Gus has a real chance. That said, I think O lands too many body blows in.”

—College and Magnolia’s Son of Crow

“I know this much, Coach O isn’t someone I would want to mess with. I feel like he would overpower Gus early and often in a boxing match.”

—College and Magnolia’s Will McLaughlin

Maybe it’s because I’ve spent a good bit of my quarantine time rewatching King of the Hill, but I see a little Hank Hill in Guz Malzahn. And if we’re talking about Hank Hill being engaged in a fight, then I have to remind you all of that episode “New Cowboy on the Block” when a former (and fictitious) Cowboys player Big Willie Lane moves in next door to Hank. Remember when Willie punches Hank?

Coach O would be Willie in this situation and Gus is Hank. Even better, Willie punches Hank with the hand that has his Super Bowl ring on it, so Coach O can perfectly reenact this scene with his national championship ring!

I imagine Saban would come in with a solid plan to slip around Coach O’s weaknesses— Namely, aiming kicks at the knees, staying out of reach, and saying things in actual English to distract him.

Eventually, though, Saban would run out of ring, and Coach O would pin him. There would be a moment when Coach O is vulnerable to a well placed kick to the groin that would give Saban the upper hand and likely the win, but Saban’s attempt would go wide right, and ultimately lose to the much larger person.

While I just said short guys like Derek Mason are scrappy, Nick Saban is a different kind of short guy. And while I believe there are an infinite number of parallel universes, there’s not a single one where Nick Saban beats up Ed Orgeron. Roll tide what, f&*$ you.

Honestly, it’d be a 12-round fight that I don’t think Pittman would ever give up in. Coach O may be more polished as a fighter but the Pittboss won’t go down easy!

I think Bailey’s being a little too generous toward Sam Pittman but I do like the idea of them both tiring out and collapsing a la the final round of Rocky II.

I don’t think there’s a coach that Coach O couldn’t beat up. I’m trying to go through my head and literally can’t think of one off the top. Coach O would definitely beat up Jimbo. The only argument I could make is he would probably come up with a decent game plan for a fight. I don’t know maybe him being from West Virginia gives him some scrap, but not like Coach O being both from South Louisiana and a defensive lineman.

I don’t doubt that Coach O could beat up Jimbo Fisher. But I would warn you against buying the Pay Per View. Jimbo Fisher is getting $75 million from Texas A&M and has only won nine games in conference play. All Jimbo knows is getting paid an absurd amount of money for a mediocre product.

Lane has put on some pounds. He’s way lethargic. He’d be like Buster Douglas after he beat Tyson. Just slow and out of shape. Just wants to fish, not fight.

Lane is getting in good shape, so I like him to sneak a round or two in early, but I think Orgeron ends up catching him being too cute and gets him with a mean right hook to end it early in the 5th.

Can we all agree that Lane Kiffin almost definitely fights dirty? I imagine Lane keeps a shiv on him at all times that he fastened out of gum and the shard of a Michelob Ultra bottle.