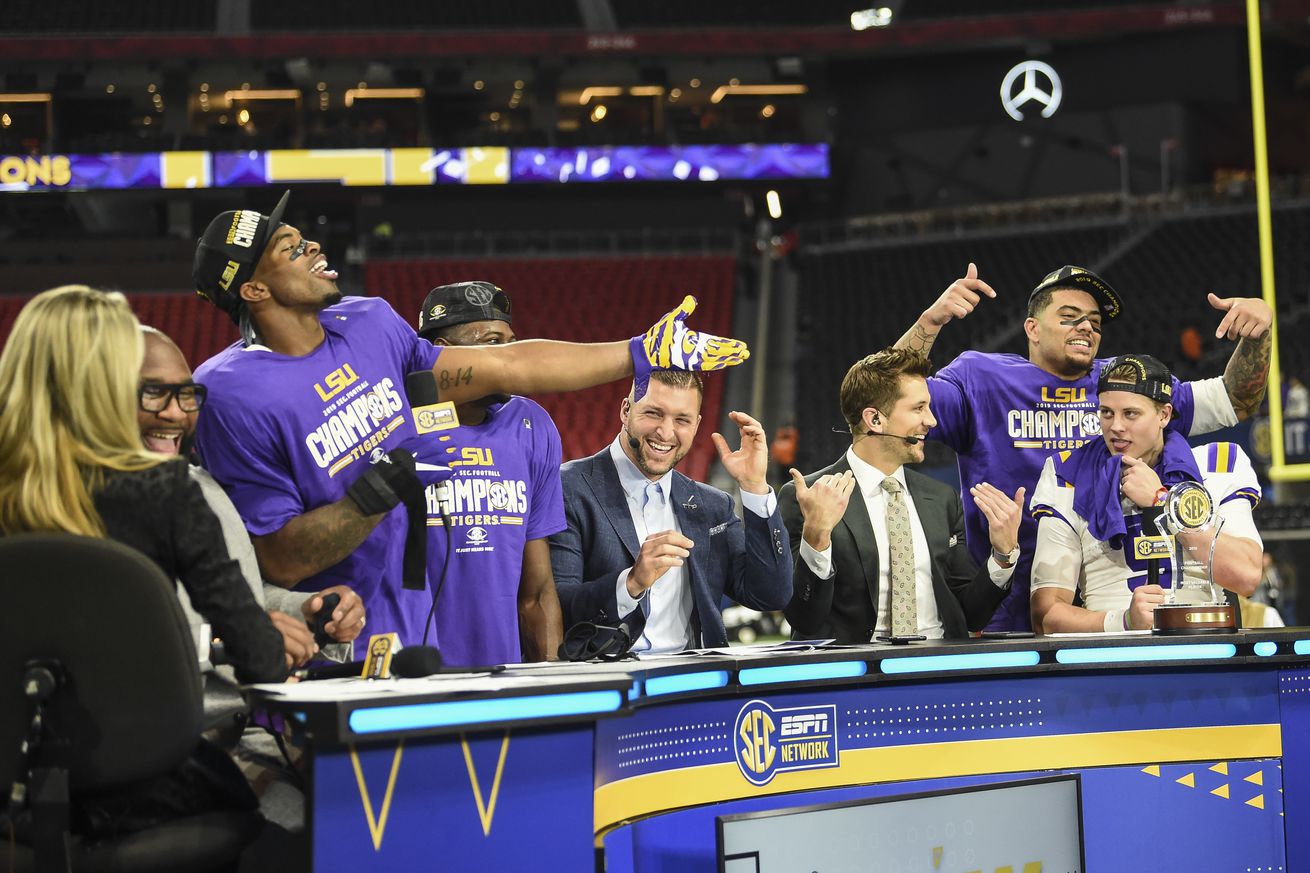 With no live sports to air until… holy shit August??… the SEC Network has chosen to implement its two-week “Takeover” scheduling where each day all 24 hours of programming are dedicated to one school. The best moments from all sports are curated for a 24-hour bonanza of your favorite team! LSU’s takeover will be this Sunday and the schedule is… meh honestly.

I mean sure, there are some fun games here, but… everything was within the past calendar year besides the SEC Storieds which, while great, already air pretty often.

Since we still have two more days until LSU Takeover Day, it’s not too late to go with my suggested programming instead.

This Sunday @SECNetwork is airing 24 hours of LSU sports. The games and documentaries they selected is fine, but I came up with my own list of what I’d like to see for a full day of LSU content. pic.twitter.com/qUuyXzNBN6

(All times are central because it’s our day and we’re using our goddamn time zone.

Let’s take a closer look at each event.

Why not start off with the biggest bang of all? LSU cementing its place as the best team in college football history! Don’t think you’re gonna go to sleep Saturday night and wake up to the good stuff… we’re starting off on fire!

You wanted to see LSU end a decade-long losing streak to Alabama coached by the greatest coach ever? Well here you go! Since the SEC Network doesn’t want to observe anything before the year 2019 in their Takeover, here’s a little history lesson. After 11 straight losses to the Crimson Tide, LSU marches into Bryant-Denny and wins 20-10 in the last game the Tigers would ever play against Bear Bryant. Because of the beauty of the internet, the full game broadcast is available in all its glory.

Join the SEC Network as they run alongside Will Wade, who runs every morning. No, like every single morning. Why does he love this so much? Let’s join him and find out. Also let us pray for the camera guy who has to ask Wade to put on his mic.

Why not pause from the sports memories for an important PSA? Coach O expands upon his world-renowned video by explaining everything we as a society should be doing to end the coronavirus pandemic.

Please rise for the reading of the Scripture.

Don’t listen around kids but this is amazing! Coach O with ALL the feels! Roll Tide What? #GeauxTigers pic.twitter.com/hoM0GFVg3U

Stephen A. Smith’s sports “analysis” is rarely something worth getting worked up over, but this montage is an absolute delight as Marcus Spears and Ryan Clark put him in his place time and time again after Smith played the heel by picking Alabama and Clemson.

9:15 am – Compilation of every Kim Mulkey baseball crowd shot

This will take awhile.

11:00 am – Season 2 Episode 1 of NBC’s THE SLAP, starring Odell Beckham Jr. and a Superdome security officer

A true LSU Takeover isn’t all fun and games. A true LSU day of programming involves the investigation of some type of potential crime that probably stemmed from being too drunk. It’s the perfect storyline to follow up the most incredible season of television ever, NBC’s THE SLAP.

The New Orleans police have issued simple battery warrant for Cleveland #Browns WR Odell Beckham Jr, reportedly in connection to alleged contact he made with a security guard in the locker room after Monday’s #NationalChampionship game pic.twitter.com/JxiaiICAAh

We honestly don’t talk enough about how after the wannabe cop confronts Beckham about the slap, OBJ responds by… Getting the Gat.

D-D Breaux is an LSU legend, the Dean of SEC coaches, and a fashion icon. But if there’s on thing she hates… it’s judges. Always underscoring or being wildly inconsistent, judging is a thorn in the side of every great gymnastics coach. But for one day, D-D gets to be a judge. Forget Judge Judy when you have Judge D-D, south-central Louisiana’s fiercest family court judge. Whether its a divorce claims dispute or bickering neighbors, Judge D-D will use the same laser-focused intensity she shows while coaching to deliver a perfect ten verdict.

I’ve gone on record saying I’m not a fan of Disney’s live-action remakes, but this is a different story. With Shareef going to LSU to play basketball for the Tigers, Shaq can’t help but yearn for being with his son and being in college again. He finds the perfect solution to this by using his last year of NCAA eligibility to play basketball with Shareef! Hijinks ensue as the O’Neals cause a ruckus in the dorms and on the court.

We’re gonna claim it and we don’t care you say. CHAMPS BABY

-Ended season ranked #1 in both polls

-Road and home wins over then #1 ranked UCLA

It’s been a long day, you’re about to get ready for dinner, but first, how about some time to yourself. Pull up a mahogany chair, sit back, and let the reigning Heisman winner show you how to puff on your cigar like a goddamn National Champion.

Time to prepare dinner as we head into the home stretch of LSU Takeover Day. Who better than LSU Baseball legend Ben McDonald and honorary Tiger John Goodman? Did you forget to buy enough groceries before your quarantine? Ben’s got you covered! He’ll eat any animal you can find in your backyard (several years ago ESPNU did a segment with him called Eaten Or Not Eaten but the video doesn’t appear to be anywhere online) and can cook it somehow. Watch here as he spends FOURTEEN DAYS hunting a deer.

If that’s too intense, we have Goodman here to balance it out with some more traditional Louisiana cooking.

This pic sums it up well. pic.twitter.com/i3KxA7E1bk

You’ve gotten through the day and prepared dinner, now it’s time for the primetime main event. Sure, maybe the championship should go here, but… we all knew we would win that. This is an epic. Drama. A duel. One of the best games in LSU football history.

Eh, fuck it. One more time for good measure.

Don’t listen around kids but this is amazing! Coach O with ALL the feels! Roll Tide What? #GeauxTigers pic.twitter.com/hoM0GFVg3U

Let’s hear it from the experts. Given that LSU beat the Horns three times in three sports in 2019, the Horns Down has been tossed around a lot. To make sure we’re all doing it correctly, we brought in three experts:

Jimmy Burrow was asked about the moments he got to enjoy after stepping away from coaching to enjoy his son’s senior year pic.twitter.com/wFFJC3anHU

WE GOT US A HORNS DOWN BABYYYYY pic.twitter.com/aVp2BB6vq4

There are 8-year-old kids in the stands that will be Horns Downing in 12 years thanks to these legends.

On a serious note, I would really appreciate if the SEC Network could put together a comprehensive championship season retrospective, similar to what the NFL Network does with player and coach interviews. Maybe one day.

Make sure the kids are in bed.