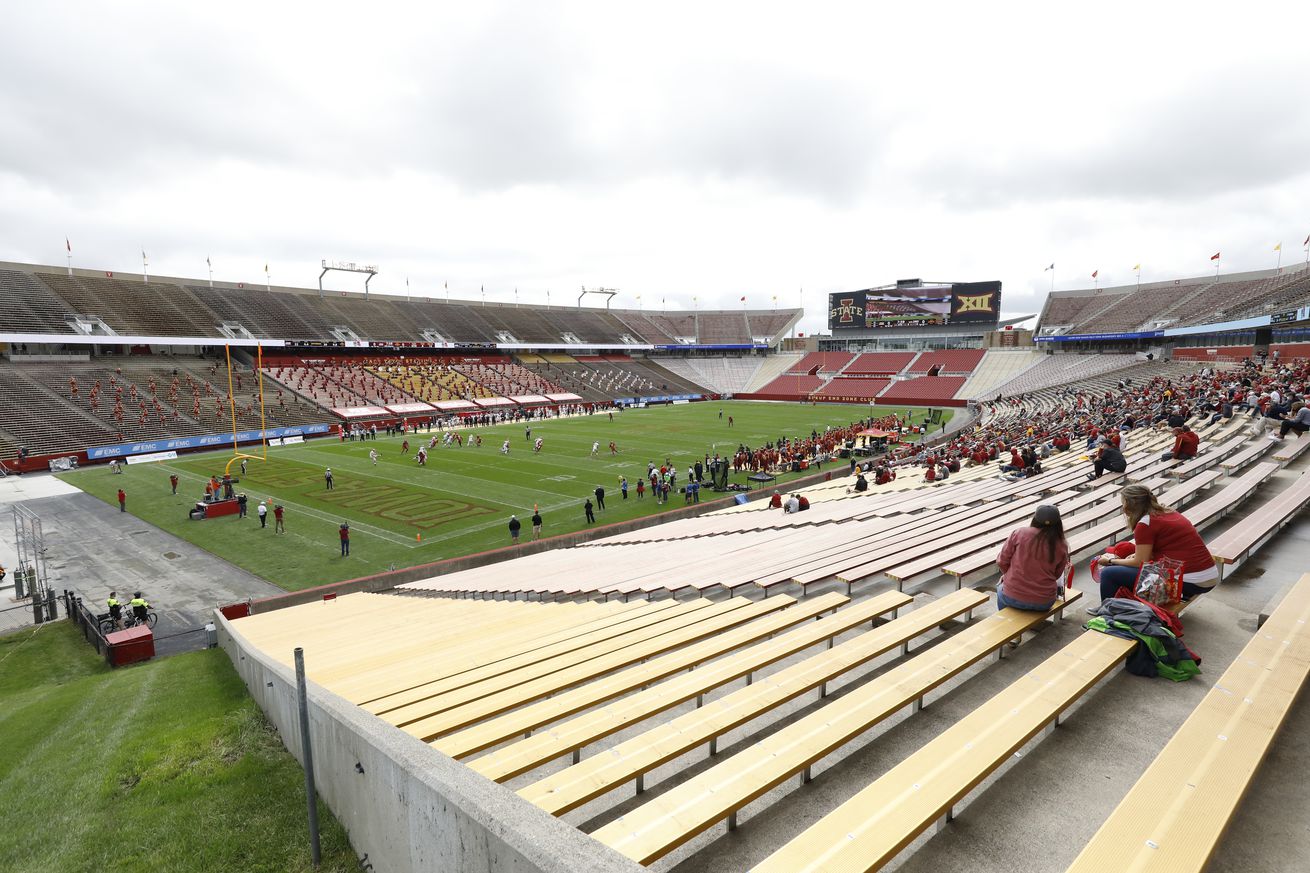 The overriding feeling for me on the first full weekend of games was one of alienation. It just felt weird. The stadiums are not very full, which I guess is normal for places like Miami and Wake Forest, but it did look pretty odd on TV.

But not as odd as when there would be a crowd shot of people standing close together. So, social distance is weird, normal crowds are weird… ok, its just me. Nothing they can do is gonna make any of this seem normal.

Nine games have been cancelled or postponed so far this season after the modified schedules were released, including six games on the slate this weekend. The biggest loss was the UVa-Virginia Tech game getting postponed from its September 19th kickoff, but maybe they will still get it worked out.

Personally, I’m most sad to see the loss of the Iron Skillet, as what is football without ridiculous trophies. TCU-SMU is one of those sneaky good rivalry games which upends the usual order of Fort Worth and Dallas dynamics, as this is the only time Dallas, via SMU, is the plucky underdog.

The ACC set the tone for the weekend by generally playing ugly, nearly unwatchable football, but only marked by one loss out of conference, Duke getting housed by Notre Dame. So no big surprises there, other than Florida St. still smoldering from the gasoline fire Jimbo set on his way out the door a few years ago.

It was up to the Big 12 to supply all of us college football fans are appropriate amount of schadenfreude. If the ACC was the appetizer, the Big 12’s futility was the main course. While Texas and Oklahoma looked like the big dogs they are, winning by a combined score of 107-3 in their body bag games, the rest of the Big 12 couldn’t get out of its own way:

Sure, the Red Raiders won, but they needed to stop a two point conversion with 3:23 left to beat a school called Houston Baptist, which I’m not 100% sure is real. OK, West Virginia notched a big win, so it wasn’t all bad news, but let’s be honest, the teams who had games cancelled by coronavirus had a better weekend than nearly half the conference.

Also over the weekend, a few more players added their names to the growing list of players opting out of the 2020 season, most recently Jhamon Ausbon of Texas A&M.

The Big Ten still can’t get together to vote on whether they are going to play, which is bureaucracy-speak for “we don’t have the votes.” The Pac-12 is still cancelled, and after looking at the Big 12, maybe not regretting the decision all that much.

Which means we are still two weeks away from when the SEC wakes up and staggers around like its re-enacting the opening scene of 28 Days Later. The zombie season will almost certainly still be going on by then, though it’s anyone’s guess how long this thing lasts.

I think the best way to approach things is that this is actually is going to be about amateurism for the first time in a century, maybe ever. There’s gonna be weird results, and that’s okay. Plenty of guys, particularly anyone with any sort of NFL stock, are going to opt out, and that’s cool, too. No one should feel obligated to risk their health for someone else’s entertainment.

But we’ve also seen that a lot of players want to play. And we should do everything we can to make that happen. If it gets shut down halfway through because its too dangerous, then that’s what we’ll do, too. But we’ll try to enjoy this while it lasts, but not read too much to anything that happens this year.

We’re playing just for fun. Which also means that the moment it stops being fun, we shouldn’t do it anymore. Weird is okay. Heck, weird can be great. But safety comes first, and if they can play, and no one is being compelled to play, then I’m not here barricading the doors.

The Zombie Season shuffles on, and maybe it can provide us all with some perspective: this stuff isn’t that important. LSU football should bring joy to your life, and the moment it doesn’t, maybe you should step back. If you can’t watch this year, I get it. I really do. If a player doesn’t want to risk his health, then he doesn’t have to. That’s the bare minimum.

But damn, we could use something happy this year. And these games are the closest we’ll come to simply playing a college football season for funsies. Maybe we’ll have to go home early when our moms call us in for supper, or maybe we’ll get the last game in before the streetlights turn on.