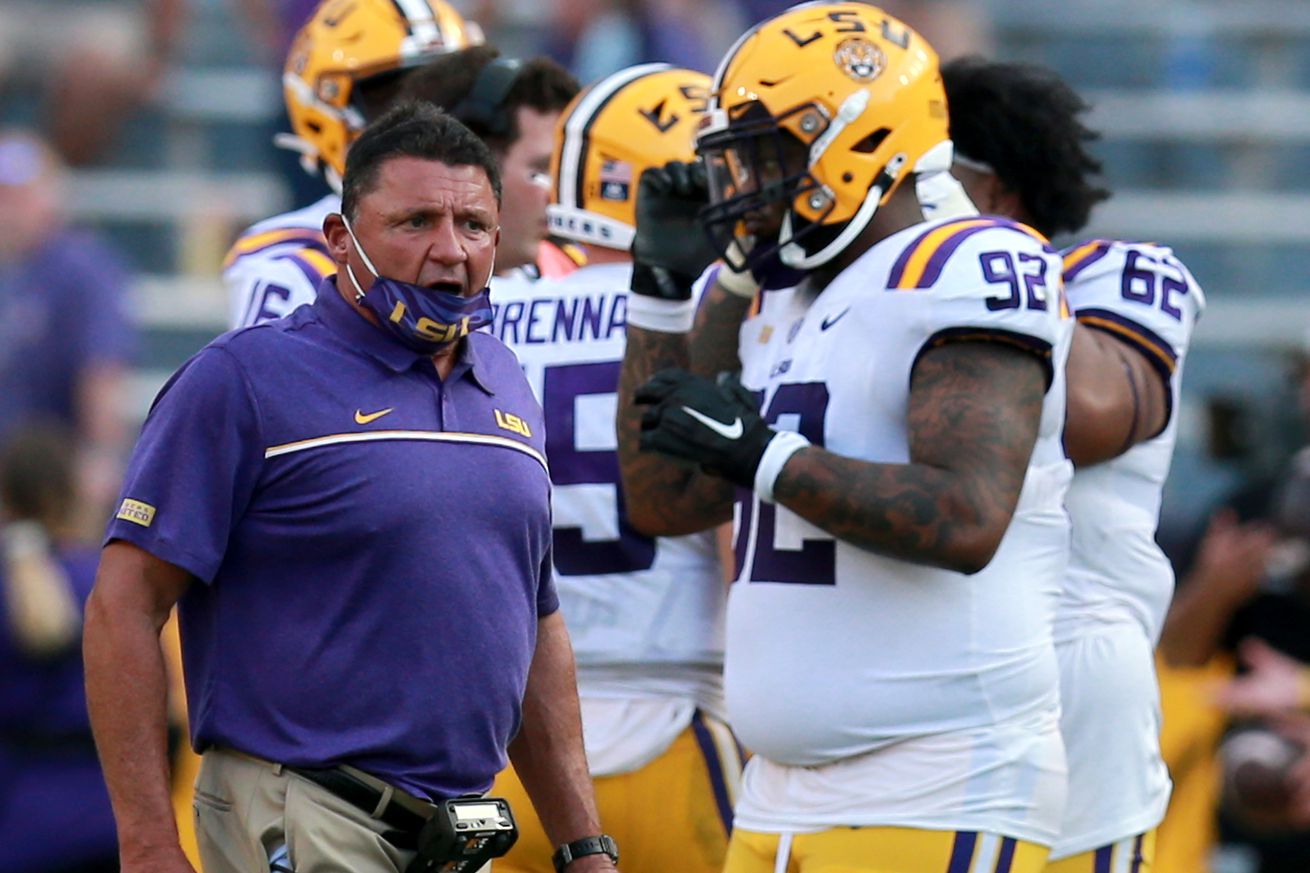 After opening the 2020 season with an ugly 44-34 loss against the Mississippi State Bulldogs, football coach Ed Orgeron met with Baton Rouge reporters for his weekly Tuesday press conference.

“Tell-the-truth Monday. We spent all day yesterday analyzing the film and the truth is we gotta coach better, gotta start with me, gotta prepare our team better, gotta coach our coaches better,” Orgeron said. “We gotta execute better, and we gotta make better in-game adjustments during the game, during halftime.”

After giving up an SEC record 623 passing yards, the focus was, of course, on the pass defense and how that unit can improve before Saturday’s evening game against Vanderbilt.

“They had 383 yards after the catch. Obviously that’s tackling, that’s assignments to many guys running free,” Orgeron said. “We gotta work on our coverage. We had some mistakes in our coverage in leverage and technique and assignments.”

Making his first career start, redshirt junior quarterback Myles Brennan had an up and down performance, completing 27 of 46 pass for 345 yards, three touchdowns and a pair of interceptions. Brennan was also sacked seven times, and victimized by some killer drops.

“We gotta protect the quarterback better, and then we gotta make better decisions in the pocket. We had some guys open, we didn’t hit them,” Orgeron said. “Could have set up in the pocket and made the decisions. I think that’s going to come with more experience and with Myles.”

Orgeron provided updates on sophomore corner back Derek Stingley Jr. and senior defensive tackle Glenn Logan. Orgeron believes Stingley will be back as early as today, but doesn’t expect to see Logan play until next Saturday’s game against Missouri.

The running game was a big focus of this week’s presser. While Orgeron believes he has three starting running backs but is “not yet” pleased with the rotation of the backs.

“Chris had a good game. John had a good game. Tyrion is a really good back,” Orgeron said. “There are some things that all three of them do. We feel that I just think we need to get the running game going more. I like to run more first down. Let’s get some positive yards; let’s get in the second and 4, second and 3, where we can make some good decisions.”

Orgeron found some positives with some of his players who made their first ever starts for LSU, praising Jabril Cox, Ali Gaye, Arik Gilbert and Elias Ricks specifically. But Orgeron knows that his team from top to bottom has to play better starting this week in Nashville.

“We gotta play with more desire. We gotta make plays. We gotta coach better. All those things that slip up on you when you’re winning,” Orgeron said. “Hey, the championship is over. This is a new season, new team, and we knew that. Now definitely we know that. Hopefully our guys can start from day one today, focus that one game at a time with Vanderbilt.”