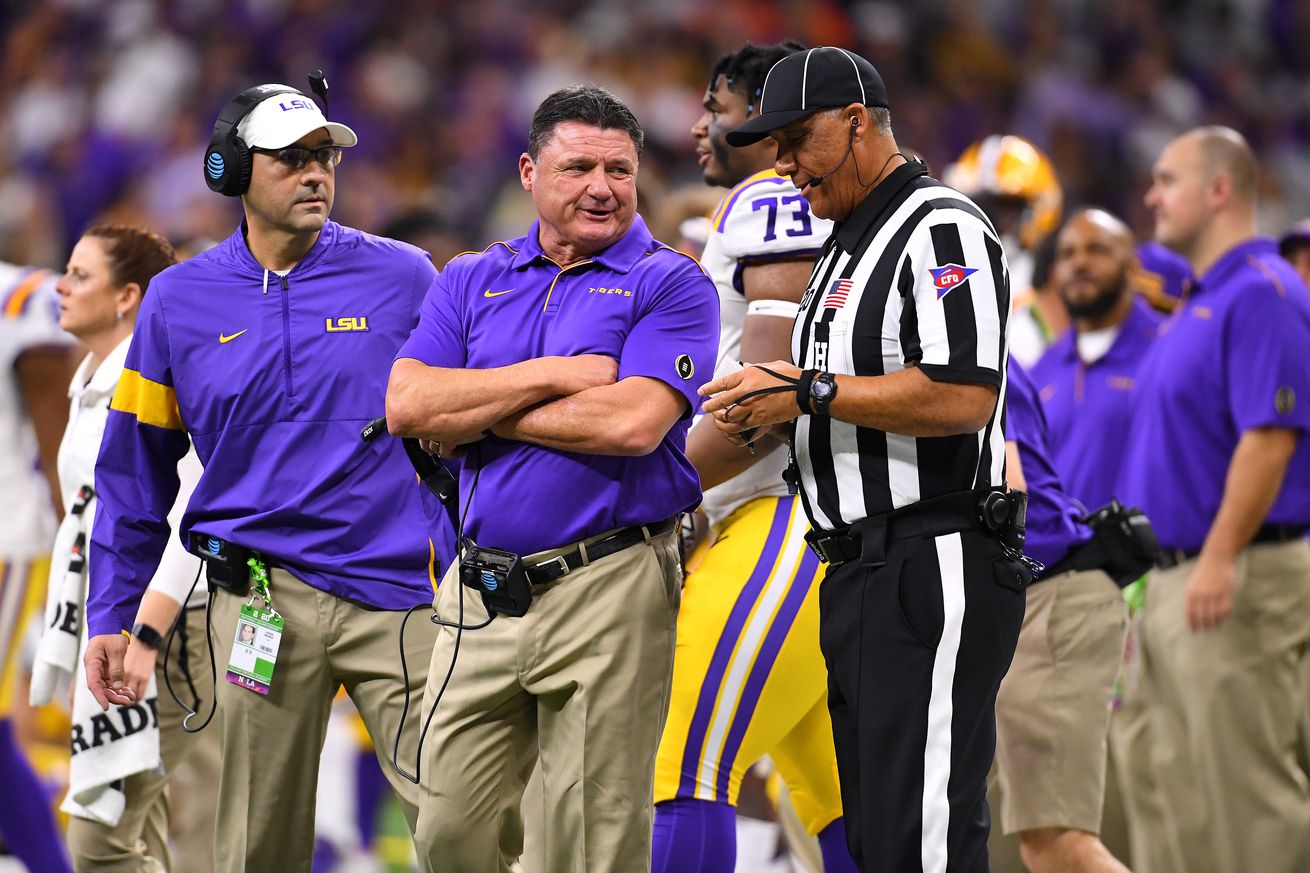 Coach O had his weekly Tuesday interview with 104.5’s Off the Bench and later met with reporters virtually, recapping LSU’s final scrimmage, the new defense and Neil Farrell’s return among other things.

The biggest news coming out of Orgeron’s virtual press conference was him saying that “most” of his football players have already caught coronavirus and that “three or four guys” have it currently. Orgeron explicitly said that his team does not have “a lot of guys in quarantine.”

The attention then shifted to on the field and Orgeron provided some statistics from LSU’s second and final scrimmage this past Saturday. After the defense had the upper hand in preseason game number one, Orgeron said the offense won the second scrimmage.

Myles Brennan completed 12 of 18 passes for 194 yards. He threw two touchdowns but also had one pass intercepted. Freshmen quarterbacks TJ Finley and Max Johnson also saw action and both completed about half of their passes. Per Orgeron, Johnson was 7-13 for 83 yards and “had two big runs.” Finley was 7-14 for 121 yards.

Orgeron also said sophomore running back Tyrion Davis-Price had 77 yards on six carries, and Chris Curry had 74 yards but did not say how many carries he got.

“I thought our offense came out with a lot of fire, had some physical presence about themselves,” Orgeron said.

Though Orgeron said the offense won the day, Coach O talked glowingly about the LSU defense and the impact defensive coordinator Bo Pelini has had.

“I will say this, we are so much better on defense right now than any part of the season last year,” said Orgeron. “I feel Bo Pelini coming in, he’s brought a new energy, a new excitement, the 4-3. Dave Aranda did a tremendous job for us, but I’m glad we moved to the 4-3. We’re more attacking style of defense, using our personnel. Bo’s done a tremendous job for us.”

Orgeron then discussed his defensive line. He said that defensive tackle Neil Farrell was welcomed back to the team “with open arms” but will have to work his way up the depth chart. Orgeron isn’t sure how much Farrell will play next Saturday against Mississippi State.

“He’s got to earn his way back,” Orgeron said. “He’s going to have to start at the bottom of the depth chart and work his way back up.”

Orgeron also confirmed reports that defensive linemen Nelson Jenkins has opted out of playing this season and discussed Tyler Shelvin’s possible return to the team.

“His family has called me,” Orgeron said. “I have not spoken to Tyler. I know some of his teammates are talking to him.”

Coach O concluded his Zoom call with reporters by saying that the focus is beginning to shift toward preparing for next Saturday’s opener against Mississippi State.

“It’s Competition Tuesday. It’ll be a big run day for us,” Orgeron said. “Tomorrow is Turnover Wednesday and Thursday is No-Repeat Thursday so we’re back into game mode, getting ready to go. Obviously, a lot of work on Mississippi State and looking at the various offenses and defenses that we’re going to see.”