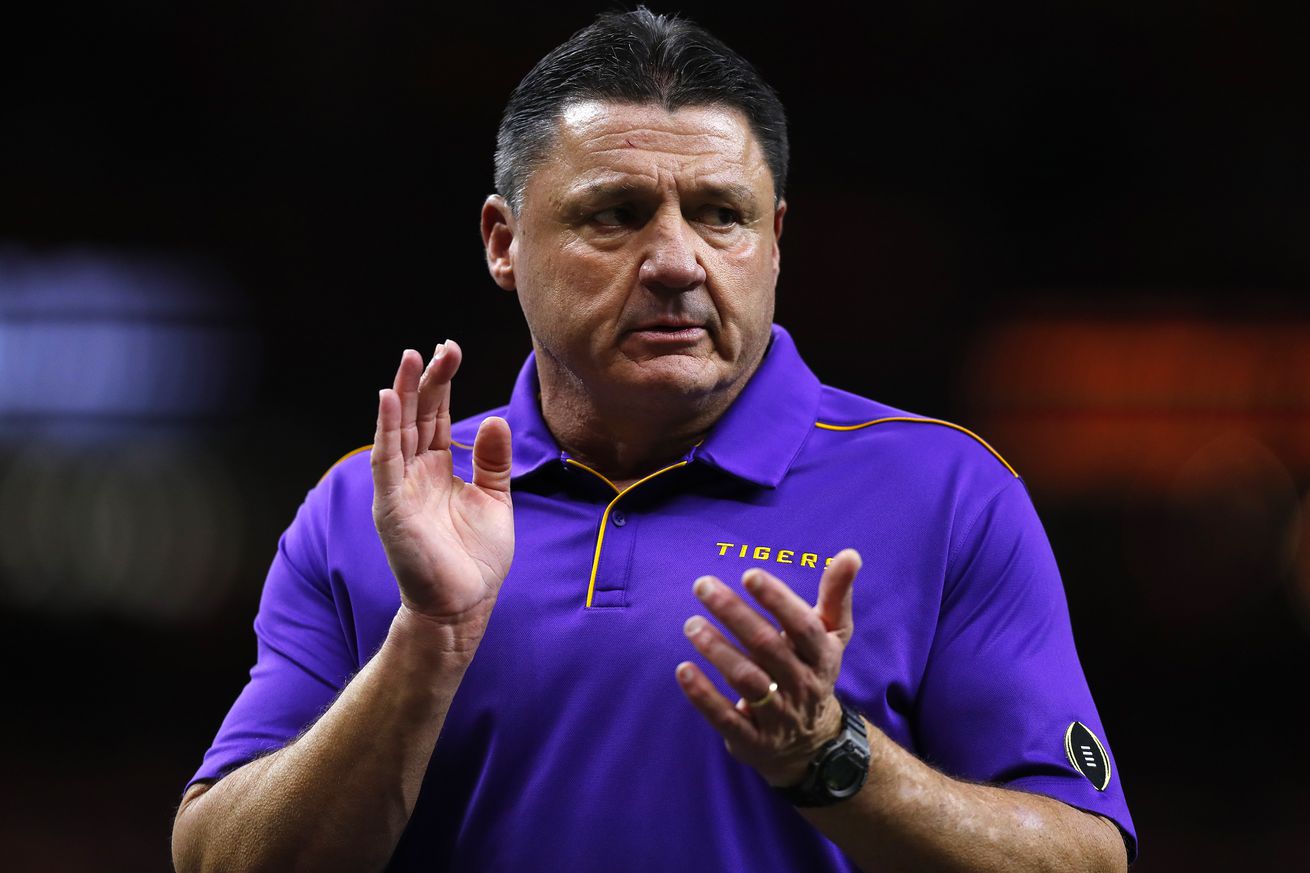 LSU head football coach Ed Orgeron had his weekly radio interview with 104.5’s Off the Bench Tuesday and also met with reporters via Zoom later in the afternoon.

Among other things, Orgeron discussed how the 2020 Tigers looked in its first scrimmage, or “preseason game number one” as Orgeron calls it.

“We only had four penalties the whole scrimmage,” Orgeron said. “That was huge for our football team. We had a great scrimmage, it was great to see our guys go live in Tiger Stadium.”

Practicing in Tiger Stadium brings out a different energy pic.twitter.com/J4jQbnBk2E

Orgeron also praised a pair of new comers, saying that true freshman wide receiver Kayshon Boutte is “locked in” as a starter while Koy Moore has looked good despite a minor hamstring pull. The plan, per Orgeron, is for LSU to utilize anywhere from six to eight wide receivers this season.

“We’re looking at Kayshon Boutte starting as a freshman, I think that’s locked in,” Orgeron said. “Racey McMath, Terrace Marshall has to be our go-to guy and Arik Gilbert. Those are our top four receivers we have right now.”

Orgeron then provided clarity on how LSU plans to use its safeties and running backs for the 2020 season. Junior safety Todd Harris is not quite back to 100 percent health after tearing his ACL last season, but “he’s getting close.” Orgeron feels he has three starting safeties: Harris, senior JaCoby Stevens and sophomore Mo Hampton Jr.

“We have three great college safeties that we’re very pleased with,” Orgeron said.

As for the running backs, Orgeron echoed his sentiments that he has three starters: Emery, redshirt sophomore Chris Curry and true sophomore Tyrion Davis-Price.

“I can see, especially in the beginning of the year, using three backs, maybe four,” Orgeron said. “But if a back is hot and having a great game, we’re not going to take him out. I think the situation will dictate itself with who’s going to be playing to start off the game.”

Orgeron also talked about a potentially massive weekend on the recruiting trail for LSU. While it’s still a dead period, 14 prospects all made their way to Baton Rouge over the weekend on an unofficial outing, being called the #TigerTurnout, organized by LSU commits Keanu Koht and Garrett Nussmeier. The #TigerTurnout had a mix of committed players like Chris Hilton, Jojo Earle and Landon Jackson, and uncommitted/highly coveted players like defensive end Korey Foreman, the No. 1 overall prospect in the 2021 class, defensive tackle Maason Smith, the No. 1 player in Louisiana, and Tristan Leigh, a five-star offensive tackle from Virginia.

Can always count on @Pluckers to come through!

The No. 1 player in America @koreyforeman54 is in BR, so the King of the Wing welcomed him appropriately‼️

Other BR businesses do the same and post your pic in the comments! pic.twitter.com/PQmPe4m0Vh

“From what I’m hearing they had a great time,” Orgeron said. “They did as much as they can legally and I think they really enjoyed bonding together.”

LSU currently has 18 commitments in its 2021 recruiting class. It’s ranked No. 3 nationally and No. 2 in the SEC behind Alabama. LSU appears to be the favorites to add three five-star players to its class: Smith, Lafayette Christian safety Sage Ryan and Leigh who is trending more and more to signing with LSU. In fact, per TigerBait.com’s Preston Guy, Leigh will be making another trip to Baton Rouge this upcoming weekend.

I just confirmed with the Leigh family, that Tristan will be returning to LSU’s campus again next weekend after a great trip to Baton Rouge this weekend. He will be bringing his sister and girlfriend this time.