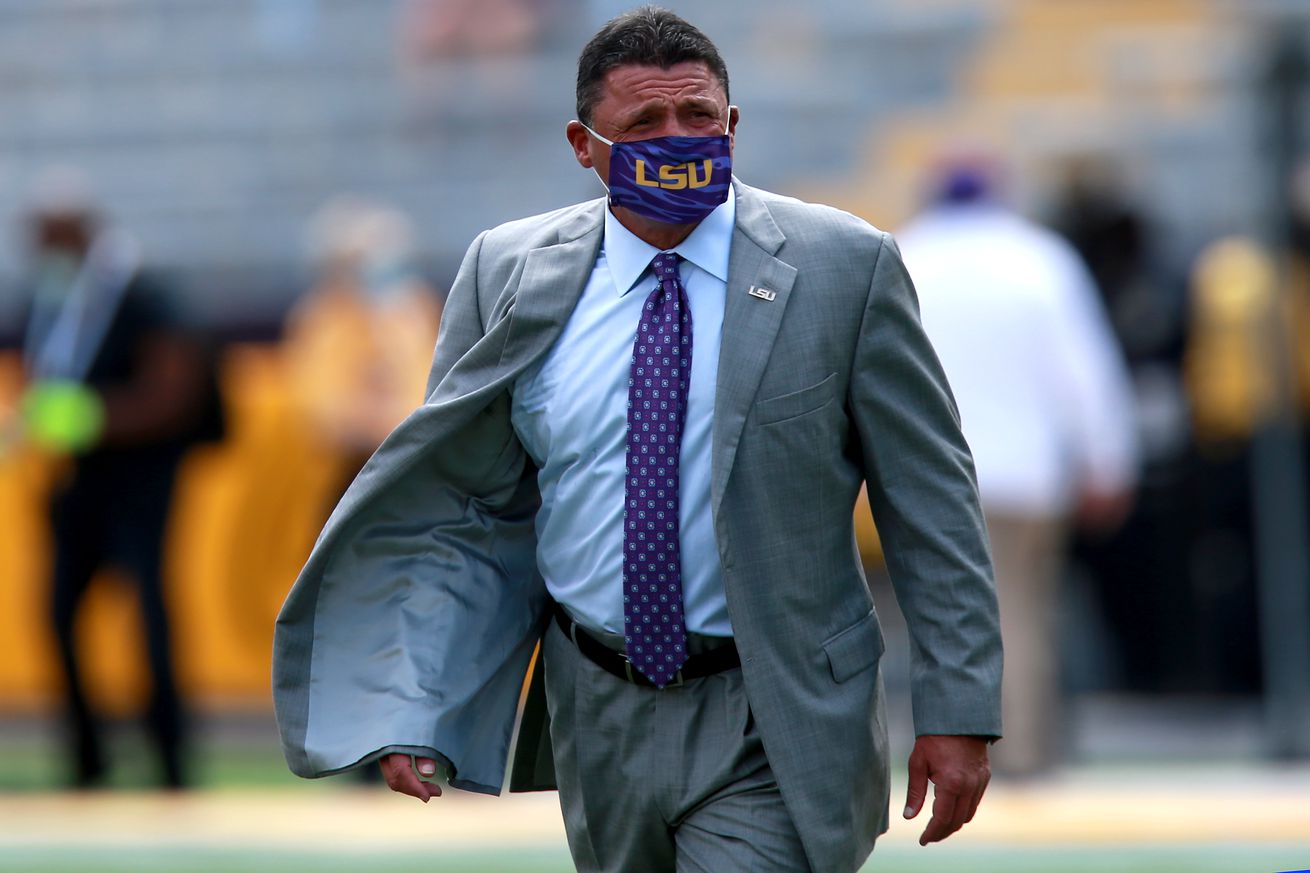 Coach O calls for simplicity on the LSU defense; LSU fans call for…well something else on defense

Ed Orgeron had his weekly Zoom meeting with reporters after his Tigers got embarrassed by the Missouri Tigers 45-41 and gave maybe the most obvious statement of the year:

“On defense not a very good performance.”

Anyway, the Tigers (1-2), are in a precarious position: outside of the Top 25 and staring down a trip to Gainesville where a win could get LSU back on track and a loss could…well let’s not think about that just yet.

Here’s what else Coach O said about the offense after Saturday’s humiliating loss to Mizzou.

“On offense, I thought our guys played very good most of the game,” Orgeron said. “Very impressive Myles Brennan, 423 yards passing, four touchdowns. No interceptions. The biggest thing he took the big hit down there on the goal line and they kept on coming. He’s not going to practice today. He’s sore, but he’s going to be back tomorrow. Very proud of Myles. Very proud of Terrace Marshall, 11, catches 235 yards, three touchdown; Arik Gilbert freshmen, six catches, 97 yards, one touchdown. I thought those guys played very well.”

Orgeron addressed LSU’s woes on third downs and the failure to score the winning touchdown at the one yard line. LSU went 0-10 Saturday and for the year has converted only nine of 39 attempts. That’s 23 percent if you’re keeping score.

But you don’t care about what O said about the offense. You care what he said about the defense which through three games has given up a school record 96 points. Orgeron said that he’s “putting it on the coaches,” and told defensive coordinator Bo Pelini the defense needs to be simplified.

“I don’t care if we have to play one defense and one coverage,” Orgeron said. “Play it, play it right, do whatever we need to do, put our athletes in a good position and let them make plays.”

After giving his opening statements, the floor was opened to questions from the media. A reporter asked about Orgeron’s (now infamous) statement in preseason that “defensively we are so much better now than we were at any point last year,” and O stood by what he saw then and still sees.

“I saw a defense with a lot of pressure. I saw a defense running around, making plays, eliminating explosive plays. That’s why I said it,” Orgeron said. “I know some of you have tried to burn me on that. I get that. It ain’t no big deal. But that’s what I saw, and I told the truth. I didn’t think we played great defense last year. And I brought Bo in. I still think we can have an outstanding defense.”

Orgeron, Pelini and the Tigers will have their chance to prove they can be an “outstanding” defense Saturday at 2:30 in Gainesville.