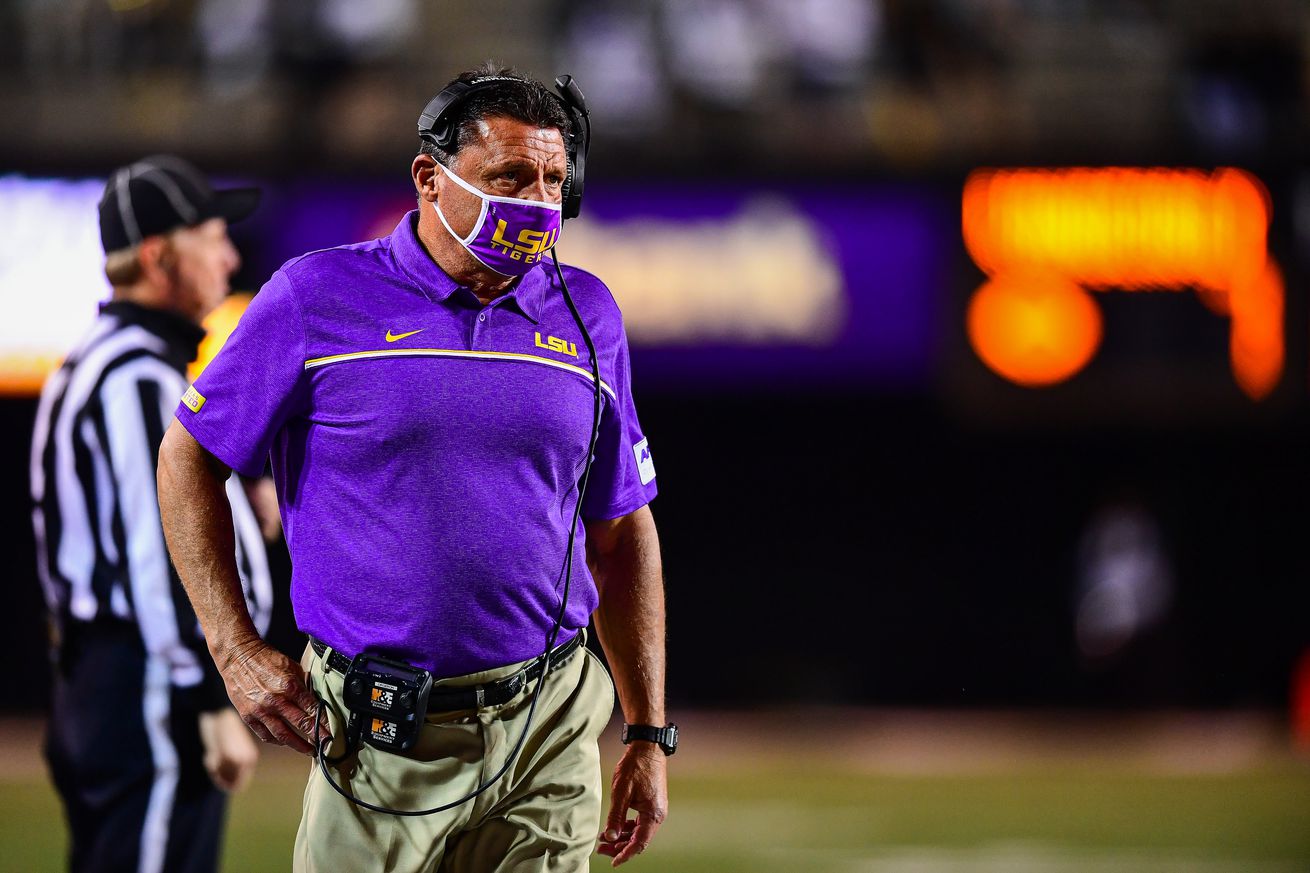 Ed Orgeron had his weekly meeting with reporters to discuss the state of his football program and looked ahead to the Alabama game that is on the verge of not being played due to COVID-19.

“Some of you may have heard we’re dealing with COVID and contract tracing,” Orgeron said. “Can’t go into detail. It’s a very fluid situation. I can tell you that we do have players that have COVID, and we do have some players that are quarantined. I can’t tell you the numbers. I’m going to let the doctors take care of all of that.”

The SEC’s COVID-19 policy as it pertains to football is that a team must have 53 healthy scholarship players to compete, including at least one quarterback, seven offensive linemen and four defensive linemen. At the time of this writing, LSU seems to meet the 53-man requirement but reportedly does not have any tight ends or long snappers and is low on defensive backs.

While Orgeron wouldn’t confirm how many players are in quarantine, he admitted that some of those players were starters and that LSU is “very thin” at quarterback. Freshman TJ Finley is reportedly the only scholarship quarterback available and the Tigers may have to “put someone else at quarterback just in case.”

“We have a plan in place,” Orgeron said. “I’m not going to say what we’re doing because it would give away our game plan.”

As for which player—or players—may be switching to quarterback, Orgeron wouldn’t specify. The speculation is that it could be punter Zach Von Rosenberg or wide receiver Jontre Kirklin, both of whom played quarterback in high school.

In other quarterback news, Orgeron ruled that Myles Brennan would not be available for the Alabama game and that there is discussions internally about shutting Brennan down for the remainder of the season.

“We’re going to do what’s the best for him,” Orgeron said. “Whether it’s getting it fixed, getting it operated now or wait. I think we’re still discussing that.”

If the Alabama game is postponed, rescheduling will be difficult for LSU. The SEC built in an extra week—December 12—for all teams in the event a situation like this came up but that date has already been filled for LSU to make up the Florida game.

LSU wasn’t the only SEC school making COVID-19 related news. Texas A&M had to shut down team activities because of an outbreak in its program; the Mississippi State-Auburn game was postponed because of positive COVID tests and contact tracing within Mississippi State’s program; and Arkansas head coach Sam Pittman tested positive for the virus.