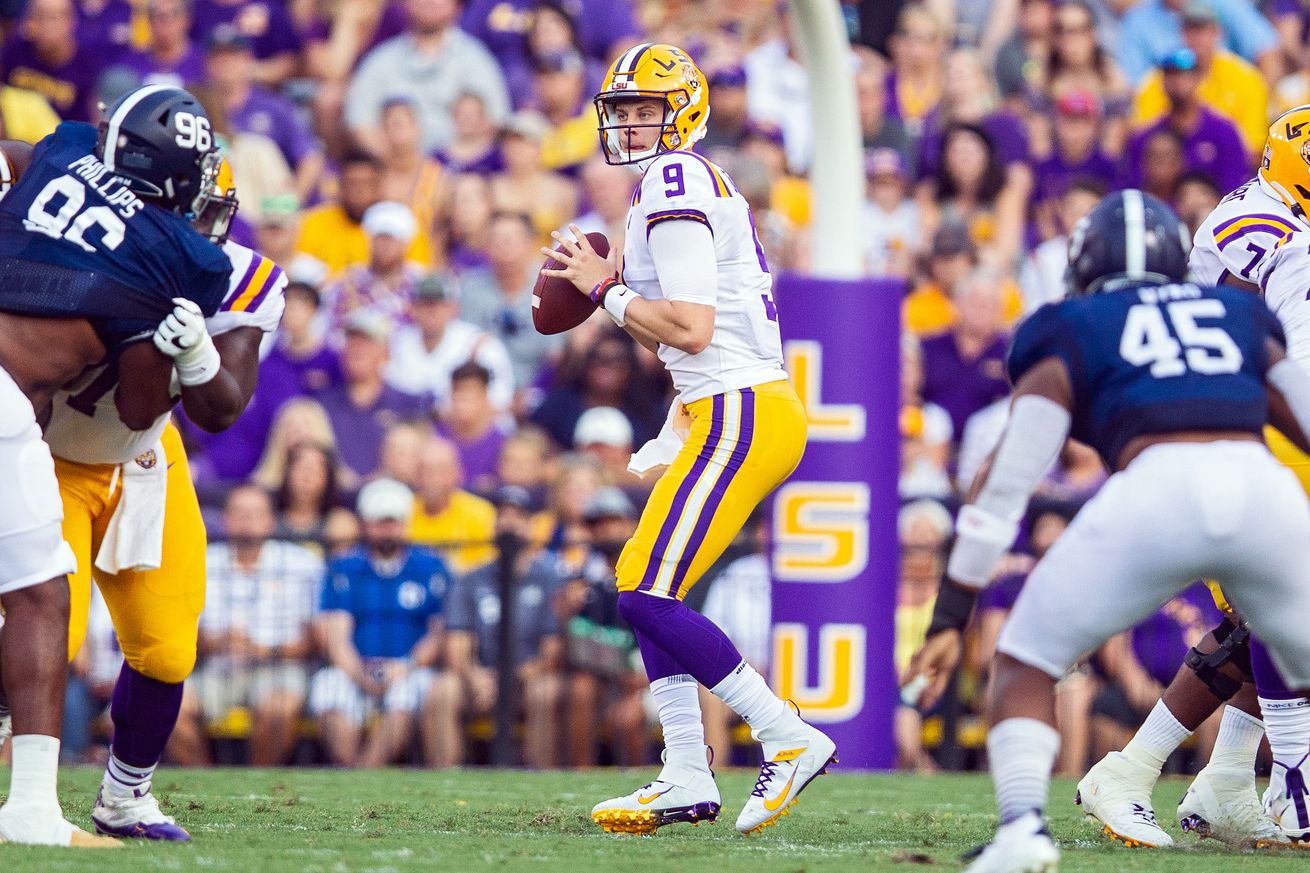 One year ago today, LSU kicked off the greatest college football season ever.

The game was a harbinger of things to come. The Tigers played a near-perfect game in their 55-3 thrashing of Georgia Southern. Beating up on a Group of 5 team should be routine for a team like LSU, but this game was special to LSU fans who finally recognized the offense was different.

I, along with 96,419 others, watched the game in Tiger Stadium. I had a great time, and couldn’t wait to watch everything this team had in store this season. The following day, I opened up WatchESPN to rewatch the game broadcast and find what I missed.

What I encountered is a dilemma that has still not been solved to this day.

The first drive for each team was not available. The broadcast replay began with LSU starting its second drive already up 7-0.

I scoured YouTube and SECSports.com for footage of the opening drives, and was able to find the broadcast call of the first score of the season: a 13-yard bullet from Joe Burrow to Ja’Marr Chase, but nothing more. It has been 366 days, and I still cannot find the drive. Let me explain to you how we got here.

As LSU was kicking off its 2019 season, the Portland State-Arkansas game on SEC Network was running a bit long. Normally if a game runs long and it’s an SEC team beating up on an FCS team, the broadcast will cut away in order to show the start of the next game, The final two or so minutes of the LSU-Vanderbilt game were bumped last year. So why didn’t the SEC Network cut away from the Razorbacks’ win over a sub-.500 FCS team?

BECAUSE IT CAME DOWN TO THE FINAL POSSESSION!

Arkansas needed an interception with 12 seconds remaining to secure a 20-13 win. Because of this, the start of the LSU-Georgia Southern game was redirected to the dreaded SEC Network Alternate Channel.

We will begin on the SEC Network alternate channel! https://t.co/T14LDcs4st

Normally these broadcasts also stream live on WatchESPN which is how the full game broadcast is preserved. One person in the replies claims it was live online, but it never seemed clear that it was.

What Did We Miss?

Well, in addition to pregame fanfare, we missed one of the best ways to open a season! LSU opened with a surgical opening drive, highlighted by a wide open 44-yard scamper by Justin Jefferson. After a rushing touchdown by Clyde Edwards-Helaire was negated by a holding penalty, the offense that would go on to be the best in college football history said “no problem” and scored on an RPO the very next play.

The opening drive for Georgia Southern went very differently as their triple option attack was stuffed on three straight plays. After months of hype, Derek Stingley Jr. dazzled on the punt return and gave the potent offense a short field for its second series.

And right here is where every replay of this game begins.

Do We Have Any Footage Of These Drives?

Not all is lost, thankfully. A few months ago the All-22 replay of the LSU offense in this game was made available. It gives you every play from the opening drive from great angles.

Also as I mentioned earlier, footage of the touchdown to Chase is widely available and can be seen at the start of this highlight video.

But the rest… the rest is out there somewhere. Even though we have the All-22, I want to hear how Mike Couzens and Kirk Morrison called it. I want to see how well we stuffed a triple option offense we thought would give us headaches. I want to see Derek Stingley’s jaw-dropping opening play. I want to hear how the crowd roared at a high-flying offense finally taking the field in purple and gold.

I know this footage exists out there. If you DVR’d the SEC Network Alternate Channel, let us know. We want to share this with the public. If this article somehow makes its way to someone at ESPN or the SEC Network, find out who runs the vault and get it out of there. The world deserves to see this.

It would be one thing if there was a really cool play that we wanted to see either early or late in a random game. The early portion of LSU’s 2015 game against Western Kentucky was never found, but that’s not important in the grand scheme of things.

This is the opening series for the offense and defense of the greatest team in college football history. Let’s find this broadcast and share it with the world.