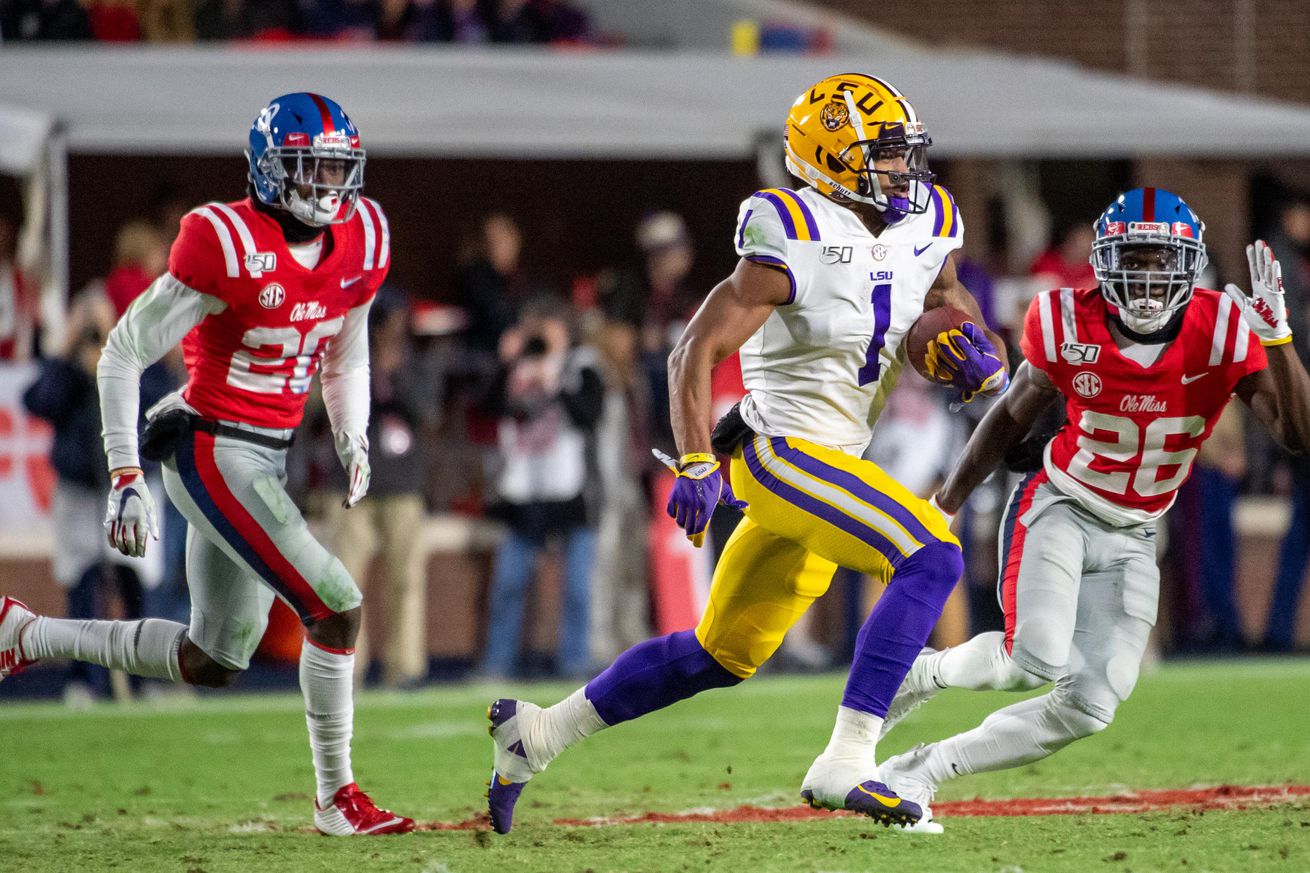 Before we get to day seven of the Burrow Bracket let’s stop and appreciate just how loaded LSU is with talent. LSU loses the Heisman winner in Burrow, a future first round pick at receiver in Justin Jefferson, Clyde Edwards-Helaire who is Darren Sproles crossed with Alvin Kamara, and Thad Moss who had the best season a tight end has ever had in school history. And yet next year will bring back a pair of receivers, Ja’Marr Chase and Terrace Marshall Jr., who combined for 130 catches, 2,451 yards and 33 touchdowns.

We’re focusing on Chase’s game against Ole Miss and Marshall’s night against Georgia in the SEC Championship. Here’s their lines from those two games.

Ole Miss has been quite irksome this night. After going into the half down 31-7, the Rebels trim a 24-point deficit to as little as 11 thanks in large part to the—ahem—deceptive speed of Ole Miss quarterback John Rhys Plumlee. Plumlee has run for four touchdowns, and Ole Miss has intercepted Joe Burrow twice.

It’s late in the fourth quarter and LSU is up 14. LSU has the ball and is looking for one more touchdown to finally do away with any fears of an upset. LSU goes to its playmakers: a pair of runs by Clyde Edwards-Helaire and on third and sixth, Ja’Marr Chase gives us another reason why he’s the best wide receiver in school history.

There’s a line from the first Mighty Ducks movie that comes to mind when I think about the 2019 LSU football team. “It’s not worth winning if you can’t win big.” LSU found themselves in that situation several times over the course of 2019.

The SEC Championship was one of those moments. LSU is up 20-3 late in the third over a Georgia team that clearly doesn’t belong on the same field as the Tigers. This was the drive where Burrow had Heisman moment No. 4,247 where he hits Jefferson for 71 yards. But remember that play didn’t result in a touchdown. If we’re keeping with our hockey analogy, that throw on the run to Jefferson was the U.S. beating the Soviets in 1980: the job was not yet finished. The Americans still had to play for the gold medal, and LSU needed to punch the ball in for six.

And punch they do. On first and goal, Ty Davis-Price gets nothing, on second and goal Burrow finds Derrick Dillon for five. LSU calls timeout and here is word for word the discussion Joe Brady had with Joe Burrow:

“Hey throw the ball to that 6’4” five-star monster of a receiver who’s our third best wide out.”

The SEC Championship is worth winning. LSU made sure to win it big.