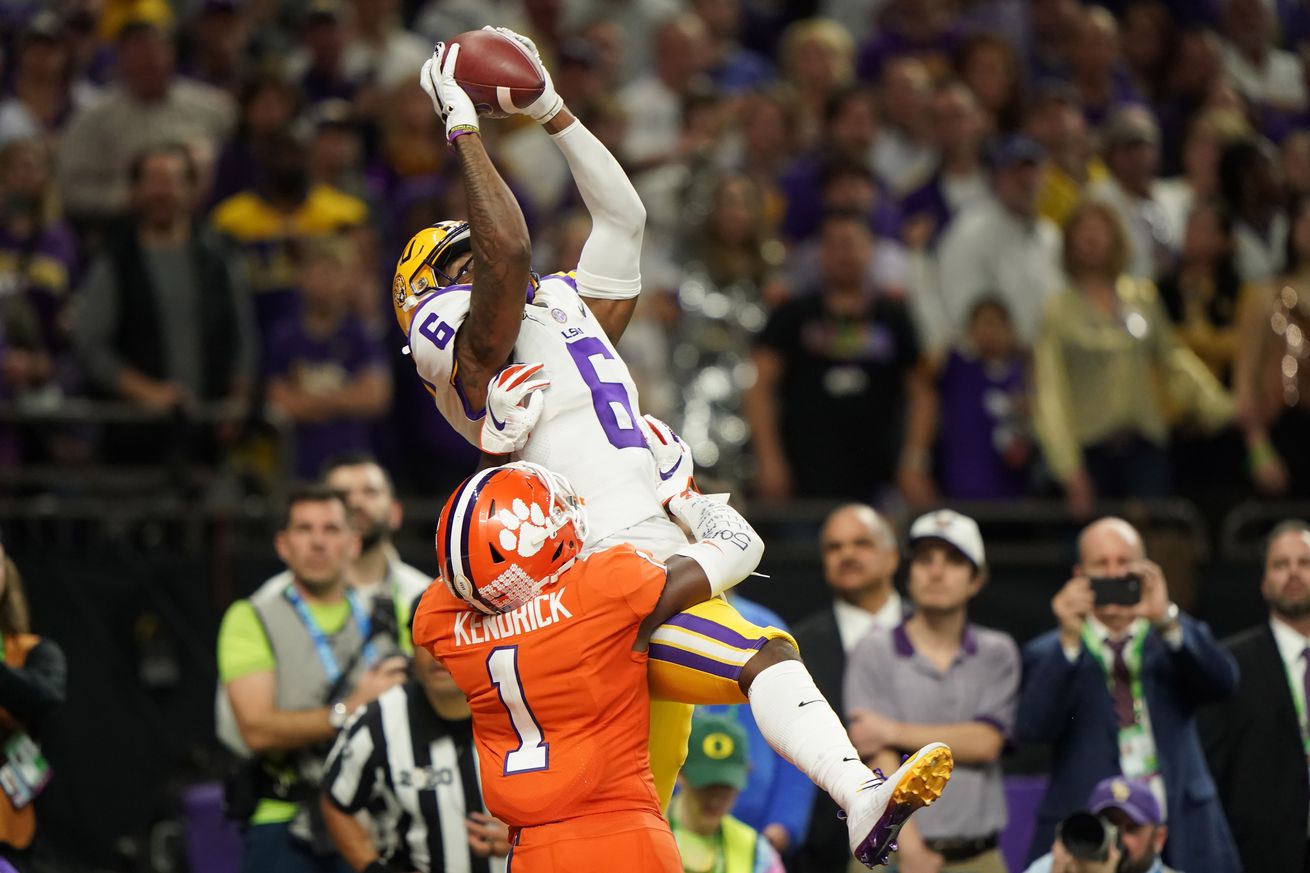 A new week begins but the Burrow Bracket continues forward.

So far it’s been chalk with the No. 1 seed 3rd and 17 pass to Justin Jefferson versus Texas and the No. 2 seed 62-yard throw to a wide open Thad Moss against Oklahoma advancing to the Round of 32.

Today’s vote focuses on a pair of Terrace Marshall Jr. scores. We’re voting between his first touchdown of 2019 and his last one—the last one Joe Burrow threw as a Tiger.

No. 3: Burrow’s 24-yard jump ball to Marshall against Clemson

LSU doesn’t quite have the national championship put away. LSU is up 10 early in the fourth quarter. The lead’s not quite big enough and the clock hasn’t wound down enough to think Clemson can’t possibly overcome the deficit. LSU needs one more score, preferably a touchdown, to secure the program’s fourth national title.

Enter Terrace Marshall. Marshall and Clyde Edwards-Helaire run a smash concept along the LSU sideline. Edwards-Helaire goes upfield four yards and pivots hard, while Marshall runs the corner route. Marshall has four inches and 10 pounds on his defender, Derion Kendrick, and simply goes up and gets Burrow’s sixth touchdown of the night, his 65th of the season and final score as an LSU Tiger. That touchdown put LSU up 42-25, secured the program’s fourth national championship and gave us this iconic gif.

No. 14: Burrow’s 8-yard laser to Marshall against Georgia Southern

Looking back, the Georgia Southern game wasn’t just the new and improved LSU offense announcing its presence to the world, it was also Terrace Marshall Jr.’s coming out party.

Marshall was the No. 1 prospect in Louisiana coming out of high school, but a broken leg and dislocated ankle ended his senior year at Parkway. Marshall played in all 13 games of the 2018 season, but it was apparent he was not yet back from the leg injury. In 2018 he was never able to find the end zone; in game one of the 2019 season he caught three.

This reception was Marshall’s first touchdown in his career and it was an absolute strike by Burrow. Marshall runs a curl and Burrow hits him, between two defenders no less, right as he makes his cut. It would be the first of 12 touchdowns Marshall would catch in 2019, with the 12th and final one being arguably the most important ball Marshall will ever catch for LSU.