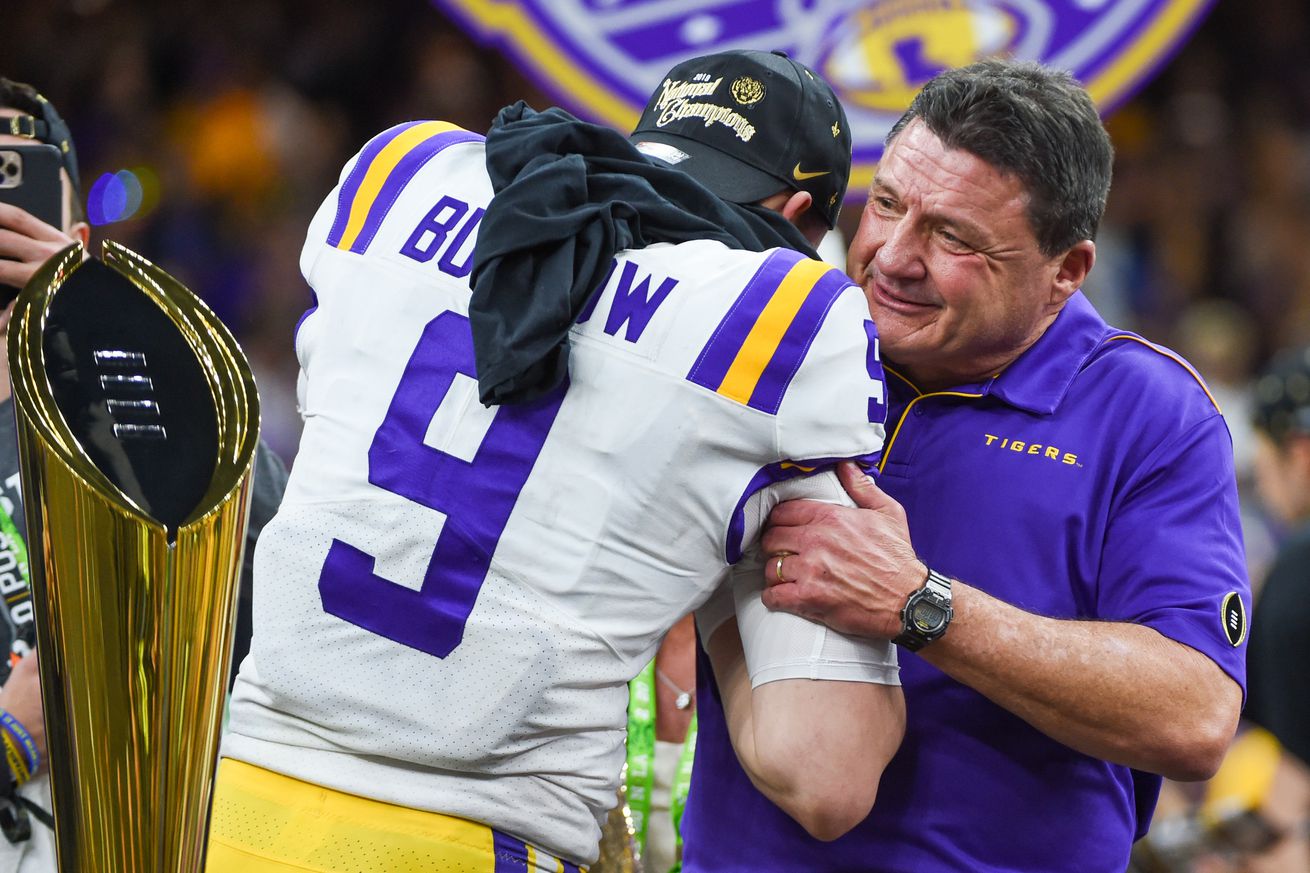 The spread of COVID-19 has had an unprecedented impact on the sports world. Following the NBA’s lead, the SEC has suspended all sporting events through March 30.

This is absolutely the right call. A lot of us may be following suit and working from home pretty soon. Please stay safe and follow the World Health Organization’s instructions on how to prevent the spread of the disease.

Now that you’ve done all that, you’re probably sitting at home wondering what the hell you’re supposed to watch with no sports on. Should you start a new Netflix series? Should you see what movies are on HBO this month? What can you watch at your house that isn’t sports???

Boy do I have the answer for you.

Wondering what to watch with a flurry of sporting events being cancelled?

Here’s a reminder that I made a YouTube playlist of every complete game from LSU’s Championship season.https://t.co/K1nREoxTG3

Yes, why not go back and re-live the greatest football season we will ever see? Here’s a game-by-game guide on what to watch for in each game.

So for the first game of the season, we have a dilemma. The SEC Network broadcast of the first drive doesn’t appear to be anywhere! I was at the game, but when I tried to replay it on WatchESPN the next day, it simply began with LSU already up 7-0 and about to start their second possession.

So if anyone out there has a reliable DVR that captured LSU’s first offensive and defensive series of their best season ever, I would really appreciate seeing it!

GOD what an incredible game. It’s crazy how long ago this game feels after everything else that happened the rest of the season. It’s probably the game most worth a revisit. While LSU’s defensive struggles were agonizing in the moment, it’s easier to appreciate how well the Texas offense played in retrospect.

The 3rd and 17 touchdown is obviously a legendary moment, but as I’ve said previously, the way TGBFTL starts playing ‘Pregame’ before the ensuing kickoff is a SUBLIME sequence. The music, the roar of the LSU fans, Burrow waving goodbye, Herbstreit talking about what a “dangerous team” LSU is… it’s magic.

Doesn’t the first half of this game feel like ages ago? If there’s a reason to watch this game intently it’s probably the most Myles Brennan we’ll get to see before the 2020 season (especially with the Spring Game in serious doubt now).

I don’t care how bad Vandy was, this was a special game. This was the game where we realized LSU’s offense wasn’t just good, they were special. They scored 28 points in the FIRST QUARTER! Ja’Marr Chase caught FOUR TOUCHDOWNS! Joe Burrow broke the LSU single-game passing TD record in three quarters. Sure the defense wasn’t…. great, but this was some dumb fun.

Watching this in the comfort of your own home is a lot more enjoyable than the experience of watching it live in Tiger Stadium in 90 degree heat! Anyway this was a very well-played game all around and a fun re-watch.

HOLY HELL what a night. If you not only miss football, but the experience of being in Tiger Stadium on a Saturday night, this is the definitive game to re-watch. I declared it the second-best home game of my four years as a student because it was really was a perfect night all around. It was the first day of true fall weather, Gameday was there with John Goodman, the game was close enough to have an electric atmosphere, but never to the point that it took years off your life. I could re-watch this game any day.

This was a fun game even before we were graced with Joe Burrow’s ass. It’s worth re-watching the whole thing!

This game is easier to appreciate as time goes on. We had gotten so accustomed to a high-flying offense, we couldn’t appreciate this ugly, classic LSU throwback win. It really is kind of beautiful in retrospect.

Buddy if you need me to convince you to re-watch this game I really don’t know what to tell you.

Once you’re removed from the stress of watching it live, you realize just how in control LSU was. It’s funny to think about how LSU never trailed in this game because while watching it live the crippling stress made it feel as if LSU was losing right up until the offensive line pushed Clyde Edwards-Helaire across that first down line.

What a goddamn game.

Y’all probably wanna skip this one because you don’t feel like watching LSU’s defense barf all over the field, but I think you should. Now that everything ended up okay, the defensive struggles are not as frustrating as they were. John Rhys Plumlee’s absurd rushing performance is actually kind of endearing. He never had a chance to win, but boy did he run his ass off. I found his performance to be quite inspiring.

This game is also missing the first drive, but this highlight video luckily captured the gist of it.

Remember when Texas A&M gave out plastic cups with 74-72 on them then came to Tiger Stadium and lost 50-7? Remember when Kellen Mond said he was the best quarterback in the SEC then went 10-30 for 90 yards with 0 TDs and 3 INTs? Remember when Kendrick Rogers, the guy LSU couldn’t stop in that 7OT game, didn’t record a single catch against LSU in 2019?

Yeah, that was fun stuff.

I can’t ever remember a Top 5 matchup in college football where literally not a single person thought it would be a close game. But still, SEC Champions! Wooooo yay alright.

Unfortunately ESPN is a real stickler when it comes to full game broadcasts of Playoff games, but this highlight video is extremely comprehensive.

Remember when I said it was insane that Joe Burrow became the first LSU quarterback to throw six TDs in a game and he did it in only three quarters? Well this time he threw seven TDs in one half against a PLAYOFF team.

We’re once again stuck with highlights, but I assume most of y’all still have this on DVR.

I really don’t know how I’m supposed to recap LSU winning a National Championship in a couple of lines, but I don’t need to because I know y’all all remember this game so well. What a season, man.