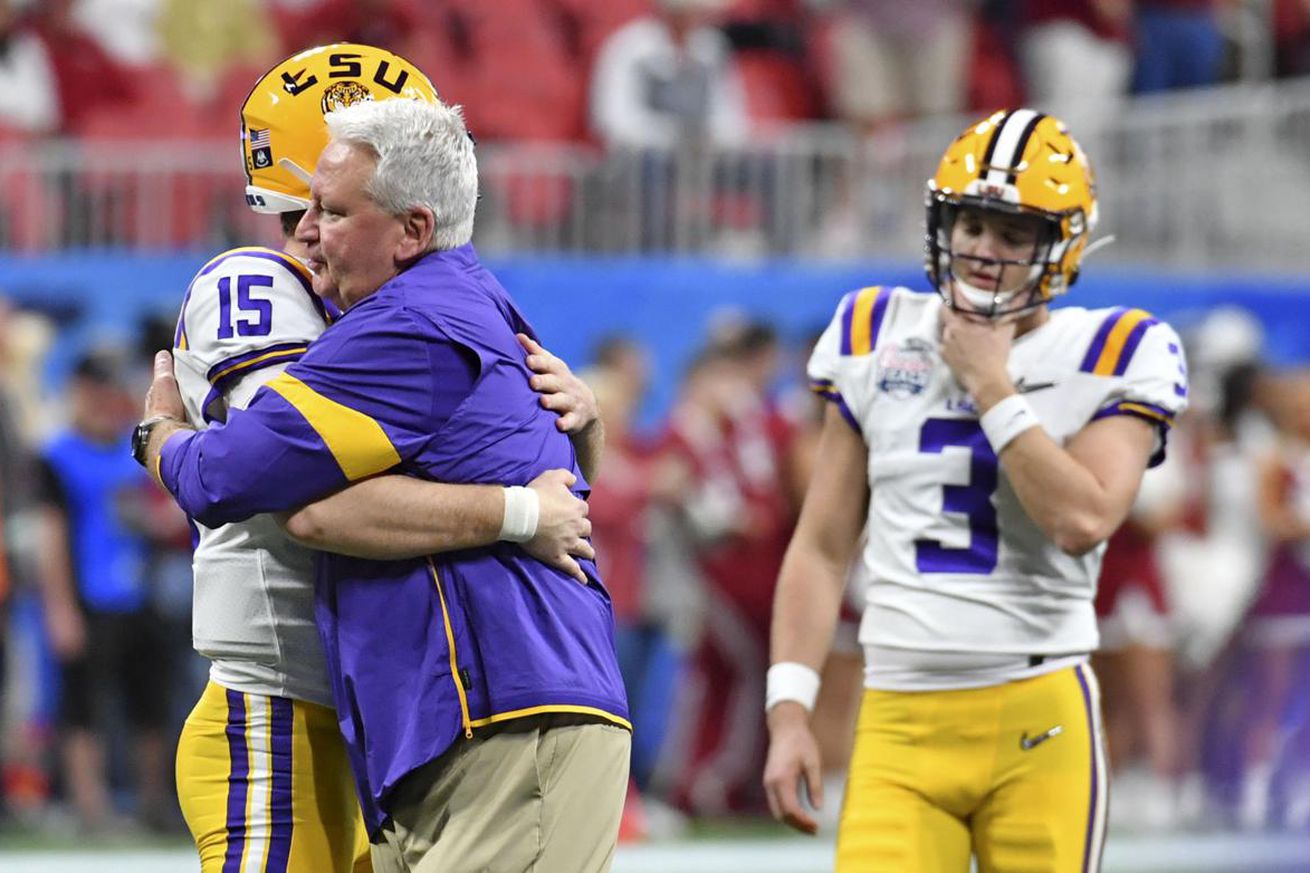 It’s no secret that the LSU offense will likely look pretty similar structurally to the one trotted out last year. Steve Ensminger has said so, Ed Orgeron has said so. Most of the core concepts will stay and be very very useful. I also think the run game will probably stay the same.

Unfortunately, necessity is going to dictate that some changes be made. Protections will look a bit different, the play calling sequencing will look a bit different, and there will be some new concepts. You lose a bunch of the offensive line that held strong in five-man protections; you lose the QB that was so elusive in the face of free rushers that he serves as his own sixth protector; you lose the QB who could cycle through a full five-man progression under almost any condition, and you lose two of the first round stud receivers that reliably generated separation.

Now I’m not saying the replacements aren’t up to snuff, Arik Gilbert, in particular, is LSU’s most gifted offensive recruit since Leonard Fournette, but replacing all that is hard. Things are going to have to look a little bit different, you don’t quite have the personnel to treat every play like 3rd and 8 anymore. So what do I think looks a bit different?

I think we are going to see A LOT MORE RPOs called next season. I’m not sure if it will be at quite Alabama level, but I think LSU is going to call a ton more RPOs to keep things easy for the OL and Brennan, while helping the offense stay ahead in the sticks. RPOs have proven to be major QB inflators over the past few years, and are almost free money. They are not hard to execute, and they keep things simple for the QB while keeping pass rushers away. Expect a ton of RPOs on early downs. I do, however, expect the RPO structure to change a little bit.

The most common RPO LSU called last year was an X glance (above) they tagged to basically all of their run schemes. It’s very simple, the QB reads the depth/rotation of the boundary safety. If he stays high to bracket the glance or just play a deep half, you hand it off; if he collapses into the run fit, you throw the slant behind him. This was so effective because you could almost universally expect Ja’Marr Chase to school his corner off the line and win inside position against tighter coverage. If the boundary corner gave a cushion, well the slant would be easy anyway. With Ja’Marr Chase opting out, the X position is a little less clear, so that reliability won’t be as clear cut. Personally, I’d actually play Arik Gilbert at the X a fair bit, as nobody would be able to stop him from gaining inside leverage, but I’m not sure if it’s realistic to assign him every route in the playbook yet with only an abridged offseason. Maybe next year! I wrote about that quite a bit in “Arik Gilbert and the Flex Tight End.”

LSU may opt to call more RPOs where the slant comes from the slot like they did against the quarters heavy defense they faced in Oklahoma. Against split safety looks, the apex (second non safety defender from the sideline) will be far more likely than a boundary corner to be playing off the line. This makes inside leverage a little bit less contested. Against OU’s quarters look, the read was pretty similar, but you could also have the QB read the hook defender (third non safety defender from the sideline) against other looks.

I already wrote about this so I’ll link it here:

Let me level with you guys, there’s just no way LSU will be able to live in the virtually exclusive 5 man protection utopia they reached last season. Maybe again someday, but not next year.

The one thing I really noticed, having spent the last week watching Linehan’s 2016 Cowboys offense (last time breaking in a new QB) was the sheer amount of all curls and spacing concepts.

Spacing concepts generally look something like this, although there are plenty of variants. They are effective zone beaters, and can really punish a team for giving their corners any cushion. They are also effective at horizontally stretching linebackers, putting them in conflict between the running back’s arrow route and curl routes. It’s a simple read for the QB, and can really help an offense stay ahead in the sticks/avoid the pass rush.

Out of empty (which LSU is in quite frequently), it can look something like this. It’s worth noting that Cole Beasley saw his targets skyrocket under Linehan due in large part to concepts like these. I expect LSU’s slot receiver, whoever that may be (Kayshon Boutte?), to get the ball quite a bit.

LSU calls it “Dragon Hook,” they also have several other variations of the concept. They ran spacing a fair bit in 2019, but I expect it and multiple variants that Linehan has possibly installed to become something they lean on VERY heavily.

I wrote about this in “Arik Gilbert and the Flex Tight End.”

It and many small variants are all over the LSU playbook but wasn’t called all that much in 2019, and now you have Arik Gilbert, who is a DREAM player to pop up the seam, do it, and do it a lot, send tweet. I wanna see this ^^^^ happen a lot.

When it comes down to it, these are all just wild guesses that I think follow logically. I’m not in practice, maybe the players are developing in a way that accentuate and demand other schematic decisions by the coaching staff, who knows? I don’t. That said, from an outsider’s perspective, I think it would make a fair bit of sense to see something along these lines seep into the very strong foundation and structure that will remain from last season.