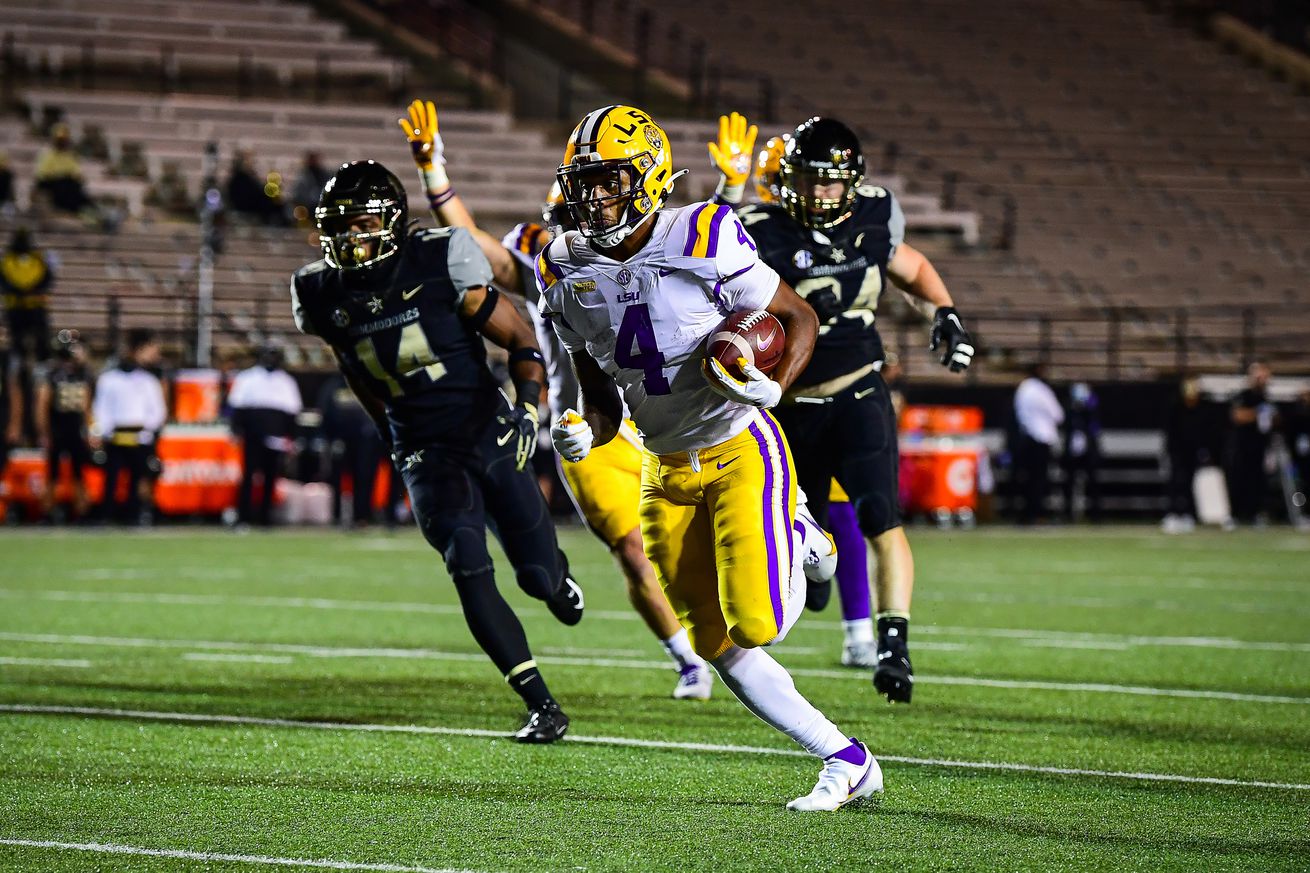 So that was certainly much better. It was a comfortable win, with LSU clicking on both sides of the ball. We got to see the breakout of John Emery, a more comfortable Brennan, and a suffocating defense. Most importantly, nothing unexpected or bad happened, no further reckoning just yet. That makes for a successful week when you’re playing Vandy, so let’s recap and review.

The defense got things started right, with a 0-yard three and out. The offense got off to an annoying start though, getting ready to go for a 4th and 2 in Vandy territory that was pushed back by an Arik Gilbert false start, leading to a punt. Vanderbilt then managed to eke out a couple first downs before punting from midfield. LSU then took the ball 85 yards for the score, seeing the first breakout drive of John Emery Jr, who had carries of 14 and 17 yards with a catch of 11. The drive ended with Jontre Kirklin taking a tunnel screen for a TD.

The teams then went back and forth with punts. Vandy then went three and out, punting to an unbelievably shifty Derek Stingley Jr, who took it 28 yards into Vandy territory. John Emery then had a couple nice carries to put LSU into striking distance, where Myles Brennan found Terrace Marshall for a TD strike. Vandy then drove into LSU territory, but turned it over on downs on some great coverage by Eli Ricks on a mesh concept, the play that killed LSU against Mississippi State. LSU answered the chance to go up 21-0 with an interception on an errantly thrown dig route by Myles Brennan. Vandy managed to get down the field on a 40-yard completion, and eventually punched it in on a TD strike to tight end Ben Bresnahan. That was it, however, for Vanderbilt scoring. LSU answered with two solid John Emery touches followed by a 51-yard touchdown strike from Brennan to Terrace Marshall, his second of the game.

Things were uneventful, with only a couple of LSU field goals, until late in the third quarter, when Myles Brennan nailed Jontre Kirklin for a 29-yard score on a flea flicker. After that, John Emery capped off his revelatory night with a 12-yard touchdown making it 41-7, where it would stay.

This really exemplifies how much more comfortable Myles Brennan looked. He has an easy hi-lo on the boundary apex here. He stays shallow on McMath, so he works to Gilbert’s dig. He faces pressure from his frontside, so he calmly shuffles up into space and makes the throw. Good stuff.

This is another encouraging sign. This throw is extremely aggressive, a far cry from the reticent Brennan of week one. In fact, it’s honestly a little reckless. If the field safety makes a better play on this, he could easily have a pick. Instead, Marshall cuts in front of him and snags it. This is a hi-lo on the field apex defender. He stays low on Gilbert’s whip route so Brennan rips it behind him to Marshall. Even though it could have been picked, I’d much rather see Brennan pulling the trigger on stuff like this than holding and being reticent.

Again, more aggression. Absolute strike here from Brennan on “doubles,” which is LSU’s most effective overall concept from 2019. Marshall has what is known as a seam read here. He has a safety directly over him, so he bends his route into space. The play action sucks the backers up into the fit and clears some space behind him, the defender falls and it’s easy money.

My favorite Brennan play of the night. Look at the anticipation on this throw. Both number 11 and 33 hadn’t yet cleared the window, but Brennan read their body leverage and directions and knew they would eventually. Throwing with anticipation, was not something he did in week one. Awesome stuff.

Obligatory John Emery, look at how he shrugs that arm tackle. Guy is fast, smooth, elusive, and tough to bring down. Obvious RB1 at this point for them. Shoutout to Tory Carter for the great block on a blitzing linebacker on this ISO insert.

LSU playing stubbie here I think, a man match coverage scheme. So on the previous drive, LSU got gashed on a pick play where they flipped it into the flat and the LSU defender got caught up in a natural pick. Stubbie is a great concept to call against stuff like that, and that’s kinda what they got here. Instead of having Damone Clark chase his guy through the pick, the assignment is for Cordale Flott to take the number three receiver if he is out within five yards. He is, so Flott cuts him off, avoiding the pick. Great pursuit by Jabril Cox and Ali Gaye.

Much better team, keep it going.