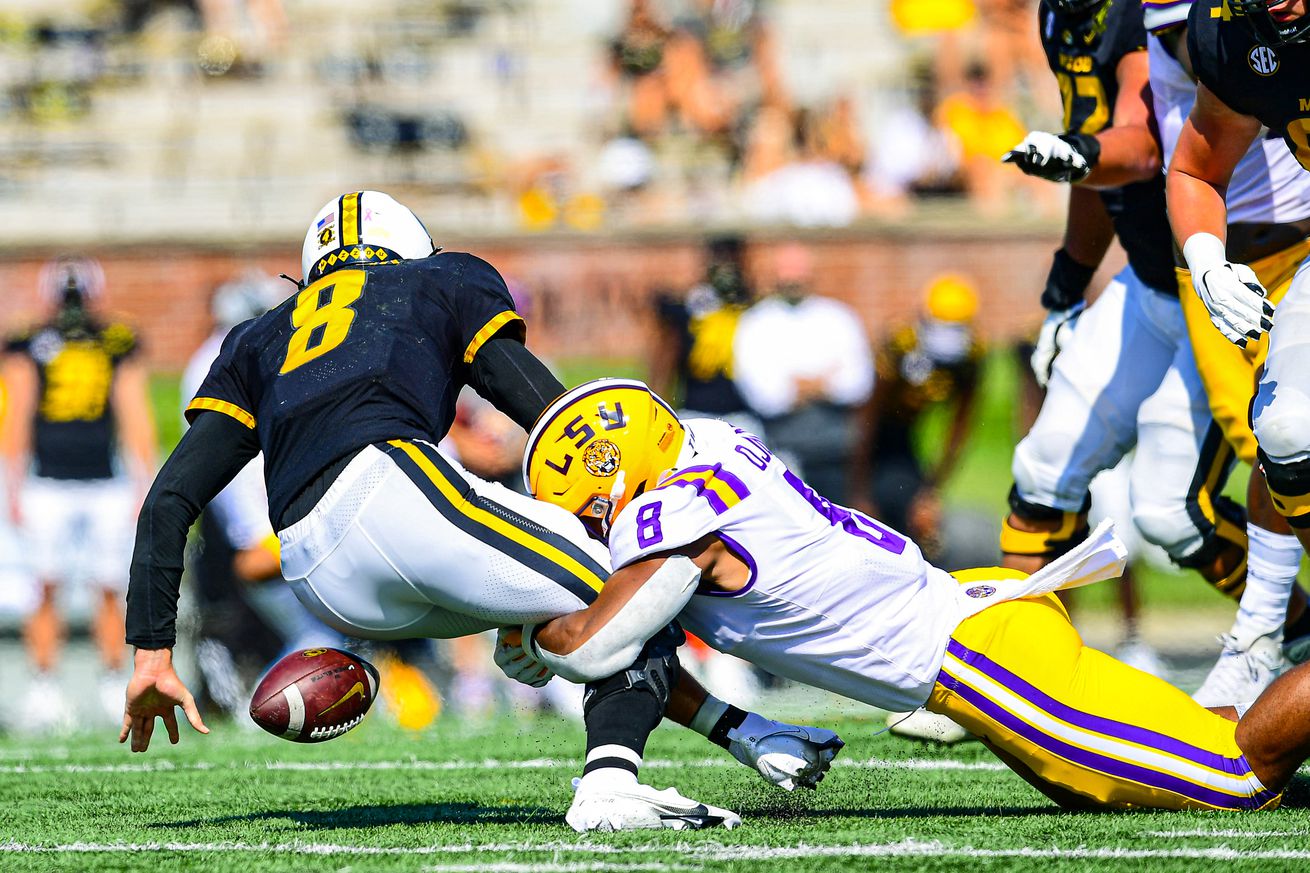 There’s really nothing I can say that sums up how poorly things are going. I don’t care how much you lost, I don’t care about the stunted offseason. You are LSU, you just won a championship, you have to be a lot better. It’s just unconscionable. To be clear, this isn’t on the offense, although it should have scored at the very end. This is a defense that genuinely has little to no idea what it is supposed to do on any given snap.

Mizzou opened the game with an immediate indicator of how the rest of it would go: a flea flicker touchdown a few plays into the game. Myles Brennan and Arik Gilbert then tore right back down the field with a drive culminating in the first of three Terrace Marshall touchdowns.

After a Mizzou turnover on downs on an ill-advised fake punt, the teams traded TDs. Then, Missouri fumbled on two consecutive possessions, leading to an Arik Gilbert TD up the seam and a Cade York field goal. Mizzou then struck on a reverse to Jalen Knox for a TD. LSU then went three-and-out, and Mizzou hit a field goal before an LSU punt ended the half.

The second half started with an LSU punt and yet another lost fumble by Mizzou. LSU struck quickly with a Ty Davis-Price TD. Mizzou struck with a TD on a BRUTAL coverage bust by Eli Ricks. LSU answered right back with an absolute beauty of a Myles Brennan bomb. The teams bizarrely traded punts before Tyler Badie scored a TD for Mizzou to tie things at 38. LSU then hit a 51 yard field goal to go up 41-38, their last score of the game. Mizzou drove down and missed a long field goal, followed by a Cade York kick being blocked. Mizzou got into striking distance on yet another BRUTAL coverage bust, with Chance Luper popping wide open in the middle of the field. Mizzou punched it in for a TD. Myles Brennan and Terrace Marshall then took LSU down to the goal line, but the unit choked and turned it over on downs to end yet another humiliating loss.

Let’s start off with a positive shall we? Myles Brennan is becoming an extremely impressive deep ball thrower. Here it looks like LSU’s “doubles” or three verticals concept that has been so effective for the last three years. Brennan is really becoming more confident. He sees the field safety take the outside vertical, so he knows there’s gonna be a window for Marshall to run into if he can JUST get the ball over that DEEP dropping linebacker. He does, the coverage by him is not actually bad and this ball is perfectly in stride. An absolute dime, a bomb. Brennan and Marshall deserve more from their teammates and defensive coaches.

This right here is a microcosm of how poorly LSU has played the run, and defended against zone schemes more specifically. Teams are doing a good job running pushing guys out of the play on these wide zone schemes to clear out cutback lanes. I also think Damone Clark may be out of his fit here. you can also see in this clip the awful job LSU has done tackling. Brutal stuff all around.

This is probably the easiest 41-yard TD Connor Bazelak will ever throw in his life. In a replay that I can’t relocate, I saw that Eli Ricks jumped the #2 (2nd from the sideline) receiver’s speed out and passed his guy to the safety. Basically, I think he thought he was playing a coverage known as Palms or 2-read. The corner’s job is to cut the #2 receiver if he breaks out within five yards. If this read is triggered, the safety is supposed to take #1 man to man. Palms is a split safety, two-high coverage, and although with Mizzou’s camera angle/no all-22 I can’t be certain. I don’t think they were even in a split safety alignment. As a result, Ricks passes his guy to, well, nobody. Touchdown.

This one is just effort. Seriously, Jacoby Stevens, a leader on this team, lackadaisically jogging after a running back who is tying the game is too much to swallow for me, Clark too. The symbolism of 18 and 7 making no effort to stop a guy from scoring and tying the game is a little too on the nose even for fiction. It really poetically sums up what’s happening right now. This is benchable effort.