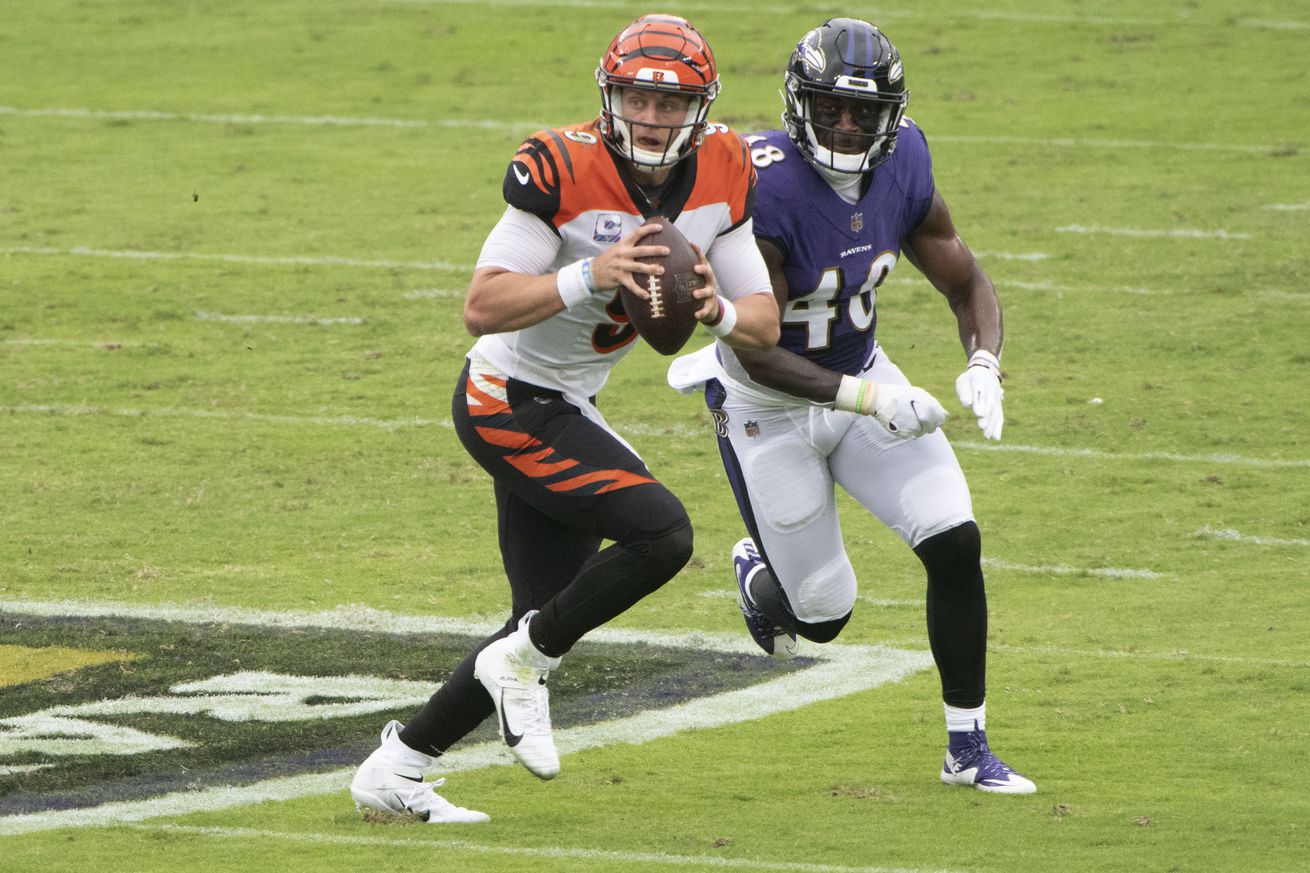 Good morning, welcome to week six of the NFL season.

Full disclosure I probably won’t be updating the thread nearly as much today as I have the first five weeks of the season. The Mrs. and I are taking our dog and making a day trip to Cincinnati. We’re flirting with the idea of watching a Bengals game in a Cincy bar somewhere and watch our Heisman winning son with the locals. What do y’all think?

Anyway, there wasn’t a Thursday game this week but we’ll have a pair of Monday games. The Chiefs and the Bills, originally scheduled for Thursday, will now be played late Monday afternoon and this will be six days after the Bills played the Titans this past Tuesday. My head hurts from trying to keep up with all the schedule changes, so here’s a tweet from the NFL’s VP of football communications that will hopefully keep things clear:

Great @NFL games happening now, more to come. A look at schedule changes for the weeks ahead. pic.twitter.com/r60l7KwgG0

What a mess. Anyway, on to the week’s games.

Kristian Fulton was activated from the Titans reserve/COVID list Tuesday and played against the Bills. Fulton has had a solid start to his professional career: nine tackles, a sack and an interception. We have yet to cross paths in downtown Nashville though.

Of course the one weekend I have a chance to make the drive to Cincinnati the Bengals aren’t at home. Gosh darn it.

Justin Jefferson potentially being covered by AJ Terrell? Well Ja’Marr Chase had no problem with Terrell, now Jefferson will get his chance to embarrass him.

Also Danielle Hunter still doesn’t seem to be anywhere close to returning for Minnesota, in fact The Athletic reports there’s a chance he could miss the entire season.

Saahdiq Charles will reportedly make his NFL debut today! He won’t play left tackle though, instead he’ll slide inside and play guard. Either way congrats to Saahdiq! I still won’t watch this game though.

Patrick Queen was named AFC Defensive Player of the week last week for his efforts against the Bengals: 9 tackles, 1 sack, 1 forced fumble, 2 fumble recoveries including taking this one back 53 yards for a touchdown.

Pro Football Reference tells me Jerald Hawkins took 11 snaps last week and 15 the week prior for Pittsburgh. Good for him, we love to see any and all former Tigers getting some reps on Sundays.

As for the Browns, Cleveland continues to be LSU: North. Jarvis Landry was Cleveland’s leading receiver in terms of yards with 88, while Odell Beckham Jr. caught the most passes, finishing with five catches.

A battle between two teams that have good records but I don’t think are actually that good?

Or this one either.

Now here’s a more appealing game. I’m conflicted, on the one hand I want the LSU guys on Tampa’s roster, Devin White and Leonard Fournette to have good games. But on the other, speaking as a Saints fan I sure would appreciate Tampa Bay dropping two games in a row.

I think the 49ers are bad now and that pleases me. However I will forever and always hate the Rams so on Sunday night I’m pulling for the meteor that comes crashing through the atmosphere and lands squarely in Santa Clara.

Tre’Davious White is questionable for Monday’s game with a back injury and that stinks for him. He did reportedly get a second straight full practice in, so maybe things are trending in the right direction for White.

And as some have pointed out, Clyde Edwards-Helaire’s touches may start going down now that the Chiefs have added Le’Veon Bell to the roster.

Patrick Peterson and Rashard Lawrence both had successful trips to Jerryworld while they were at LSU. Peterson won the 2011 Cotton Bowl, while Lawrence recorded picked up three tackles in LSU’s 2018 season opening win over Miami, who wasn’t back then and still isn’t back now.