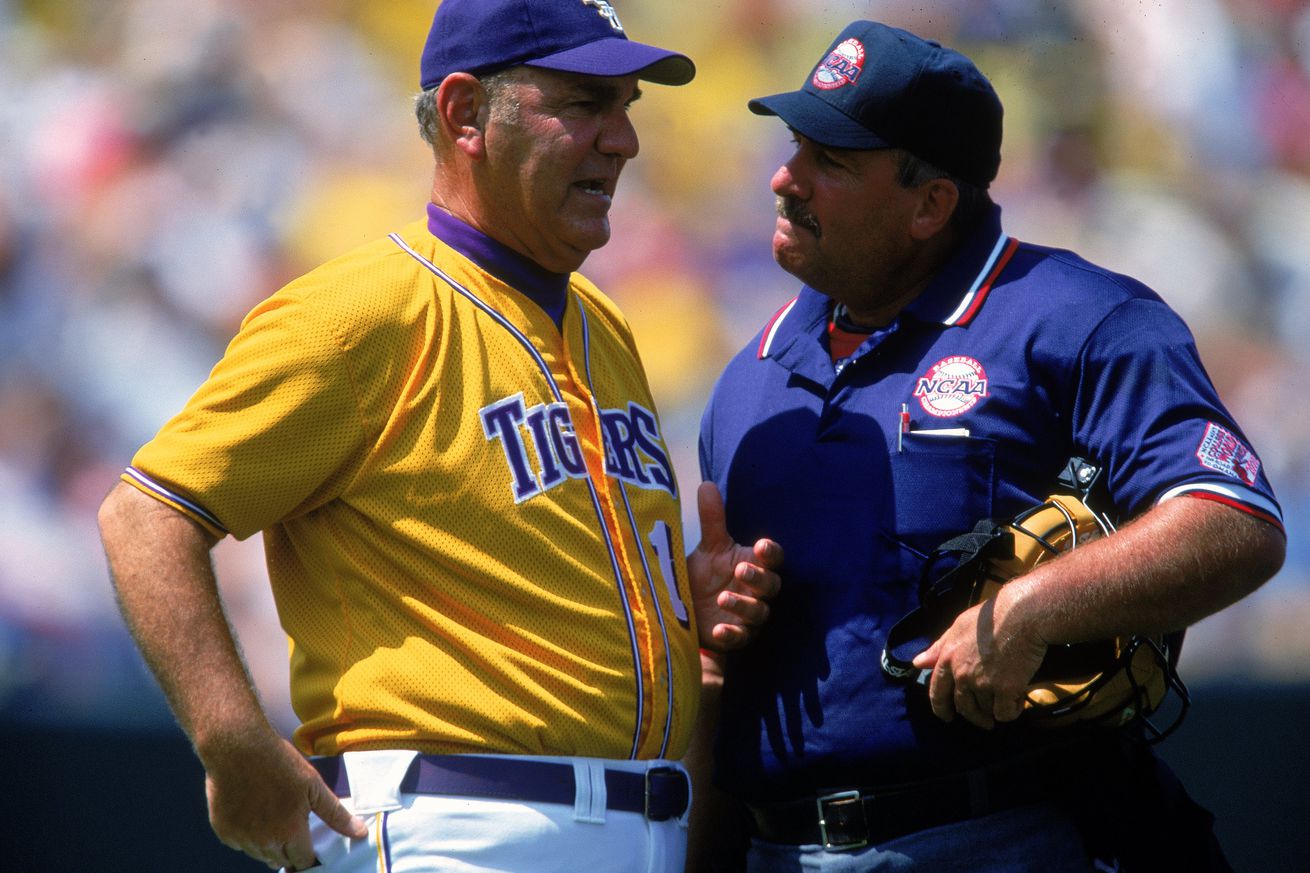 Unfortunately, we can’t bring back Skip for y’all.

Let’s bring back the six-team regional!

There has been a second coronavirus outbreak on a Major League Baseball team, causing yet another round of game cancellations. It is growing increasingly unlikely that the league will manage to complete its ambitious 60 games in 67 days plan.

But I would rather light a candle than curse the darkness, so I am here with a plan to save the baseball season which would have the added bonus of driving traditionalists insane while also making every longtime college baseball fan happy.

It’s time to bring back the six-team double elimination regional.

There’s an entire generation of college baseball fans who have never experienced the gleeful insanity of a six-team regional thanks to the baseball tournament expansion to 64 teams and the introduction of the Super Regional. And look, it’s a better system now. It allows more teams in the field, it usually reaches a more equitable result, and the Supers are a legit event, maybe even better than the CWS itself.

OK, maybe not that great, but Supers weekend is pretty cool.

So I don’t want to go back. This isn’t nostalgia in the sense that some old guy is arguing the past was better. Now is certainly better. The field is deeper than ever, and it is all on TV. It’s awesome.

But, there is a little nostalgia at play. Those six team regionals were brutal. Grossly unfair and insane, but fun. Don’t you old timers want to go home again, just for a year? And y’all who never got to see the old format, wouldn’t you like to see it play out, just once? Just to see how it used to be?

Major League Baseball can give us that chance.

First, and this is the biggest step, we need MLB to admit they made a mistake. I’ll hold my breath, I know. Playing a 60-game schedule in every team’s home stadium, necessitating 30 teams to crisscross the country was just insane. The bubble model has proven far more effective, and MLB needs to figure out a way to get their teams in a bubble to control the environment and prevent possible infection.

But it’s also not going to happen in the next few days or anything. So here’s what they should do: keep playing under the current system, and if games get cancelled, they get cancelled. Any time there’s a positive test, shut it down.

Lop off the last two weeks of the schedule and plan to close down on September 15th or so, giving the teams time to go to the bubble and quarantine. With any luck, most teams will have played between 30-40 games.

Now, there are 30 teams in MLB in six divisions. So who goes to the postseason? Hang onto your butts traditionalists, but every team that didn’t finish in last. Let’s just admit this season is weird and truncated and have fun with it. If you’re in last, you don’t get to advance to the regionals, but the other 24 teams do. If there’s a tie, have a one game play in.

Then, determine your hosts. There are six divisional winners and just four regions, so the top two division winners from each league get to be the host. Again, have a one game playoff if to break any ties before the teams enter quarantine.

Let’s go World Cup on this. Forget fair. Fair isn’t happening. If there’s a year to toss tradition and just lean into the crazy and maybe, just maybe, have a little fun, this is the one. Keep the AL/NL distinction, but have two six-team regionals in each league. If the nominal host can’t host, it chooses the host facility. That way maybe we don’t cram a whole bunch of ballplayers in New York City, the Yankees could host in Florida, where all their retired fans live anyway.

For those of you who don’t know, or maybe just purged it from your memory, the top seed gets a massive edge in the CWS format because the winners of the 2/5 and 3/4 seeded games play each other, but the winner of the 1/6 game plays the LOSER of the 3/4 game. You can cruise right into that marble game by playing the worst team and then a team fighting off elimination.

Anyway, it’s a bunch of fun watching teams burn through their pitching staffs by day two and then trying to advance with whoever is ambulatory and pushing them towards the mound. We can go back there, if only as tourists.

Then the four regional winners can move on to the League Championship Series and then we can have a standard AL versus NL World Series. It would be weird and maybe some crazy team would sneak through the regionals, but… who cares? Wouldn’t that be fun?

And couldn’t we all use some fun? Learn from college baseball, you stodgy pros. Bring back the six-team regional. It will be fun, I promise. If nothing else, we’ll get to see Bob Costas’ eye pop out from rage.