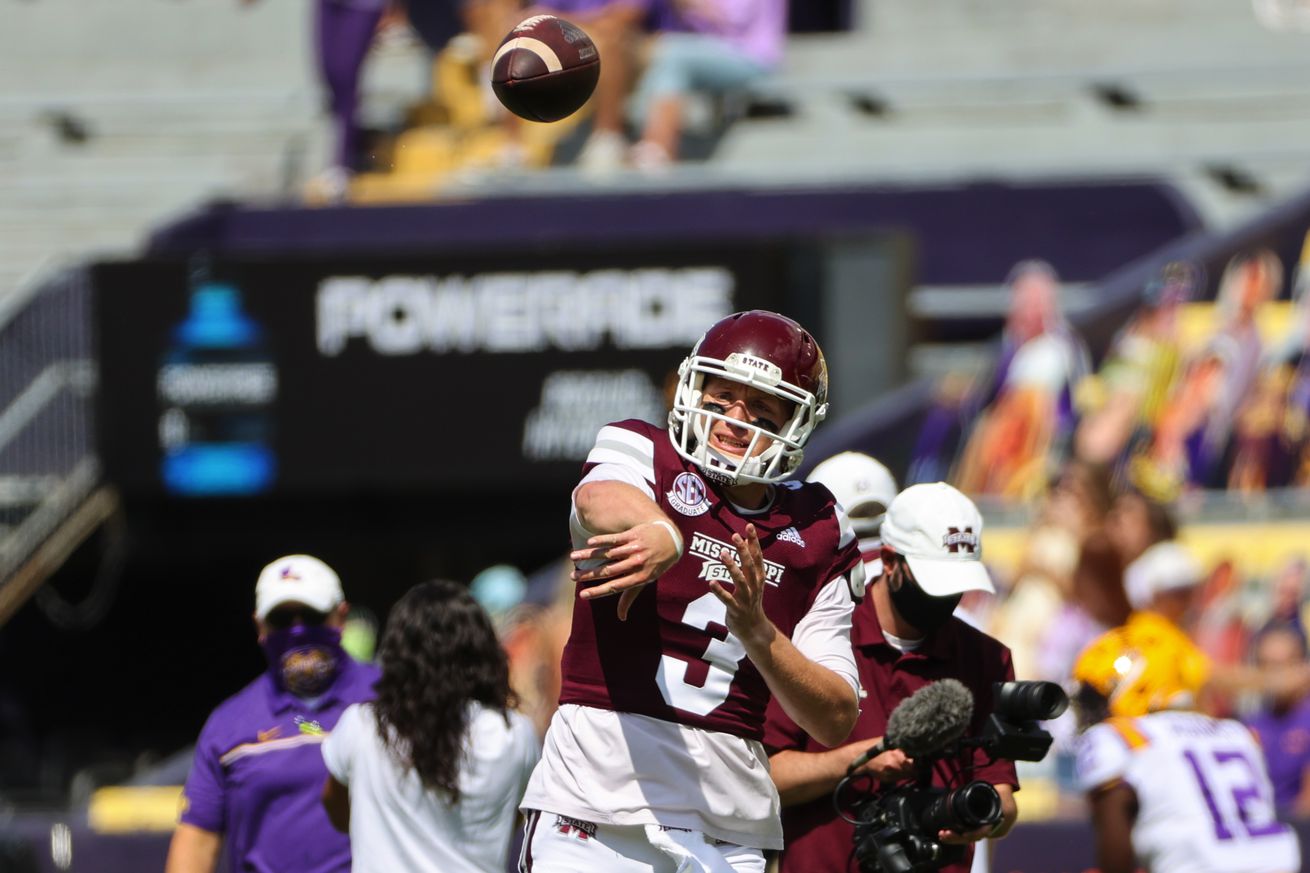 He did a lot of this | Derick E. Hingle-USA TODAY Sports

Remember when we won the national title?

Last year, LSU ran roughshod over just about everyone, and the only question on offense was “how much?” That is certainly not the case this year.

LSU’s offense struggled right from the get go, with more punts (4) than first downs (2) on its first four possessions of the game. After those first drives, LSU had run 15 plays for a mere 26 yards. Look, we expected the offense to take a step back, but not to run back to 1975. It was a dismal start, only buoyed by the fact Mississippi St’s offense struggled nearly as badly.

The problem was, Mississippi St suddenly realized midway through the second quarter that Derek Stingley was not playing, and KJ Costello unleashed the offense. Of all of the many people from last year’s team LSU missed, the most notable absence was Stingley’s.

Costello simply tore apart the LSU secondary. After throwing a pick six to Jabril Cox to give LSU a 7-3 lead, he would lead the Bulldogs on two consecutive touchdown drives of 75 yards. Both scores came on 3rd and 10. Three different Mississippi St. players finished the game with over 100 yards receiving (Kylin Hill, Osirus Mitchell, and Javonta Payton). Every DB got torched.

And the second half opened up with more of the same. State scored on its first three drives of the second half, twice finding the end zone. The LSU secondary was absolutely helpless to stop it, as Costello finished the game with 623 yards and 5 TDs on 36/60. This is both a Mississippi St. and SEC single game record and an LSU defensive record for passing yards allowed. Apportion blame accordingly.

But a funny thing happened to LSU at the half. After Myles Brennan looked mostly helpless in the first half and the coaches seemingly forgot that its run game existed, the staff made actual adjustments at the half. LSU scored on its first two drives of the second half as well and staked itself to a 24-20 lead. Brennan would finish the game with 345 yards on 27 of 46.

LSU was playing poorly, but it had seemed to find itself, and maybe could hold off the frisky Bulldogs before the cardboard cutouts in Tiger Stadium. Then the roof caved in again.

State scored two touchdowns to take a 34-24 lead in the early moments of the fourth quarter. What had seemed like a game in which LSU would slowly find itself, now appeared that it would be the defense, of all things, which would let things go. And then Brennan threw an interception so bad it looked like it was intended for the Bulldogs. Replays show his arm was hit, but it was the kind of interception which ends any chance of a comeback.

That was when the defense finally woke up. Eli Ricks intercepted a deep ball, giving LSU great field position, which the offense immediately converted into a touchdown. On the next possession, Jacoby Stevens stripped Costello of the ball, and the defense pounced on it. This time, LSU couldn’t find the end zone, but it at least moved the ball enough to give Cade York the chance to hit the game-tying field goal. With just under ten minutes to play, the game was all tied up again at 34, This team was given the chance to show what it was made of. These are the moments you play this game to experience.

At first, it seemed LSU had forced yet another turnover, the third consecutive one and fifth of the game, but instant replay overturned the LSU recovery, ruling the Costello still had a second of possession as his arm was moving forward, turning a fumble into an incompletion. The very next play was a 37 yard strike to Tyrell Shavers. Brandon Ruiz would coolly nail a 43-yard field goal to give State the lead.

Myles Brennan and the LSU offense would respond… by going three and out. But all hope was not lost. The LSU defense again forced a third and long from the 24, and a stop would force a field goal. LSU would need a touchdown to win, but it was still in the game. But the defense allowed yet another 3rd and long conversion, this one for yet another touchdown. State went 5 of 9 on 3rd and longs, and Costello went 7 of 11 for 194 and 3 touchdowns on 3rd down.

LSU would make one last drive, but at that point, they were praying for a miracle. A miracle did not come. Fittingly, Brennan threw an interception on the game’s final play.

So this is how the title defense begins, not with a bang, but a whimper.