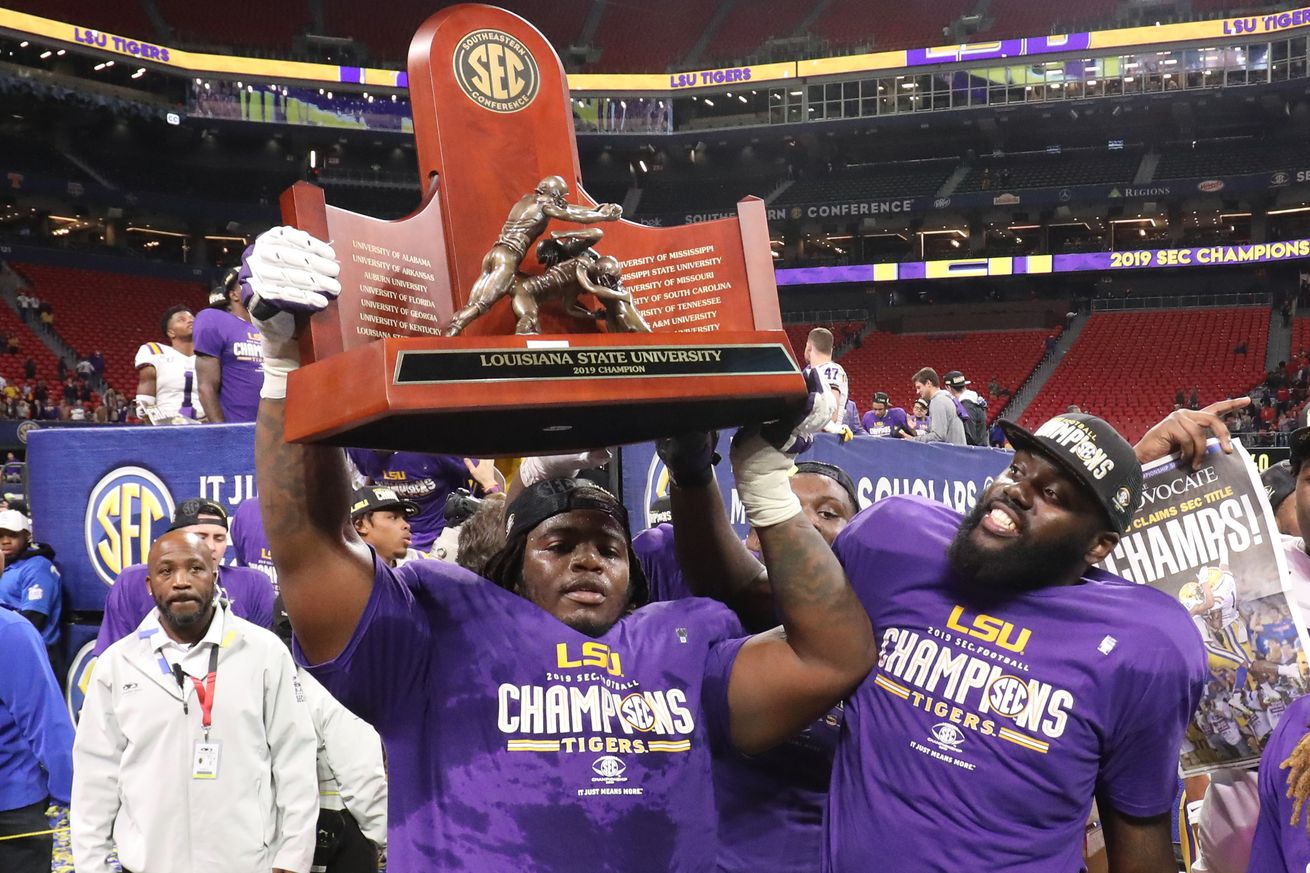 After weeks of speculation, Sports Illustrated’s Ross Dellenger confirmed something we’ve been suspecting: The SEC football season will consist of a 10-game, conference-only schedule.

As fate would have it, this announcement came literally five minutes after I finished designing a full schedule for the entire conference! I’ll list the week-by-week schedule first, with each team’s individual schedules being lower. Before we get into it, some notes.

Takeaways: If we’re starting the season late, then we’ve gotta make it up by starting with some BANGERS. Obviously Georgia at Bama is one of the marquee games of the season, and it was already the first conference game on the schedule for both teams, so this isn’t a massive change. I love the idea of LSU opening its title defense against Lane Kiffin in his first game at Ole Miss. That’s too juicy. The Gators and Vols playing in September is pretty standard, but feels even more exciting in Week 1. Auburn was the only team in the SEC to slow down LSU’s all-time great offense last year, and now they get to be the first ones to take a crack at Mike Leach in the SEC. Overall, these matchups will make people excited for football again.

Takeaways: More heat! The idea of LSU playing on the Plains in late November didn’t sound right to me, so I moved it back here where it rightfully belongs. As if Lane Kiffin opening on the road against the defending champs wasn’t enough, his home opener is against Alabama. God this is fun.

Takeaways: The thing that pains me the most about using 2021 and 2022 cross-divisional games is that Lane Kiffin makes his return to Rocky Top with no fans in the stands. That’s extremely disappointing. Georgia is the only team unlucky enough to have to wait three weeks for a home game, but once they are home they get Arkansas, so that should be a fair trade.

Takeaways: Before Alabama and Tennessee fans come at me with their pitchforks for making them play on the fourth Saturday in October instead of the third, I’ll point out that this is the exact same date they played on in 2015. So knock it off.

Takeaways: Yes yes yes YES LSU GETS A HOME GAME ON HALLOWEEN! I know some of y’all think we should be playing Ole Miss, and there’s a chance that’s what the actual SEC will decide, but I think playing anyone will be fun. Florida at Ole Miss also promises to be an incredibly interesting game. That one is already on the schedule so we’ll get to see it at some point.

Takeaways: So the Auburn-Georgia game is still earlier than its traditional mid-November date, but still in a spot that feels more natural than the second or third SEC game.

Takeaways: Man, an LSU-Alabama game in an empty Tiger Stadium is depressing… ugh, I don’t want to think about it. Next!

Takeaways: Vandy and Florida get stuck with super late bye weeks, but the Gators will be thankful once they see their last two opponents. Also Texas A&M gets a break by having an extra week between their games against Alabama and LSU, something the pre-COVID schedule didn’t offer.

Takeaways: Something I didn’t consider until now is the Egg Bowl’s newfound Thanksgiving tradition. Do they play it this week instead of Rivalry Week? Or do they suck it up and just play on the last Saturday like everyone else? That will be something to watch when the actual schedule comes out.

Arkansas at Missouri (in Kansas City)

Takeaways: Y’ALL! Can you imagine The World’s Largest Outdoor Cocktail Party the Florida-Georgia game being played on the final week of the season, likely a de facto SEC East Championship Game??? That’s awesome! Kentucky and South Carolina get stuck together since they also lost ACC rivalry games, and everything else here is intact. Now let’s look at each individual team’s schedules and look at the trends.

Takeaways: The two games added here are a trip to Kentucky and a home date with Tennessee. The last time LSU played those two teams in those stadiums two completely different types of chaos ensued, so this will be interesting.

Takeaways: So yeah, if the SEC incorporates the 2021 and 2022 cross-schedules then Bama has to play Georgia and Florida in the same season. You just hate to see it.

Takeaways: Remember how we all said Aggy was gonna have a good season simply because of a ridiculously easy schedule? The Gators are coming to town now and that makes things more interesting. A trip to CoMo isn’t a walk in the park either. Everything after the bye week would be a hell of a lot of fun.

Takeaways: Things are shaping up for Gus to save his job again. As funny as it is, Auburn ending the season with LSU and Bama back to back is just a headache for all involved. Their new games are at South Carolina and home against Mizzou, not too daunting. Their three real tough games are all pretty spaced out. I’d be all for this if I was an Auburn fan.

Takeaways: During the entire four to five hours I work on this schedule I completely forgot Mike Leach is State’s coach now. This year has been too goddamn much.

As for the schedule, it isn’t great. The home games are mostly front-loaded. They’re only at home once over the last six weeks, and it’s against Georgia. It’s a good thing Leach isn’t at risk of being fired this year. Well, he is but that‘s because of his Twitter account.

Takeaways: Weird schedule, and they WERE gonna go to Notre Dame also! What’s going on here?

Takeaways: Georgia gets a tough break with only one home game in the first five weeks… but it’s the SEC East. How hard can it be? Tennessee and Florida in the last two weeks is the kind of epic finish we deserve to see after years of watching the Dawgs blow out Kentucky and Georgia Tech every November.

Takeaways: They BETTER be thankful for that late bye week! This is one of the most fun schedules we’ve ever seen from a good SEC East team. This would be super fun to watch.

Takeaways: So yeah, I doubt the SEC would make a team play three straight road games to end the season, but if there are no fans are road games so bad? The Vols better hope there can be fans at the Vandy game because it’ll probably turn into a Tennessee home game.

Takeaways: I was about to mention that Vandy just can’t catch a break with this schedule, but I don’t know what a break would be for Vandy.

Takeaways: They got Clemson off the schedule! Now they only have to play… the only team that was better than Clemson last season. *angry Muschamp noises*

Takeaways: Now that Missouri is only playing SEC games it’ll be easier for their coach to remember the conference he’s in.

Elijah Drinkwitz straight up told Mizzou fans his goal is to win the Sun Belt and then apologized.

Mizzou’s goal ought to be to win the Sun Belt.pic.twitter.com/JDn90zrSXN

So there’s the schedule! Making this was fun, but hard as hell. It always looked like I was just about to get it, then I realized Kentucky had four straight road games, or Ole Miss had two games on the same day.

Let me know in the comments what games or dates you would like to see change, or what ideas you really like.

Also as a reminder, LSU has won its most recent matchup with all 13 other SEC teams. Do not forget that, whatever you do.