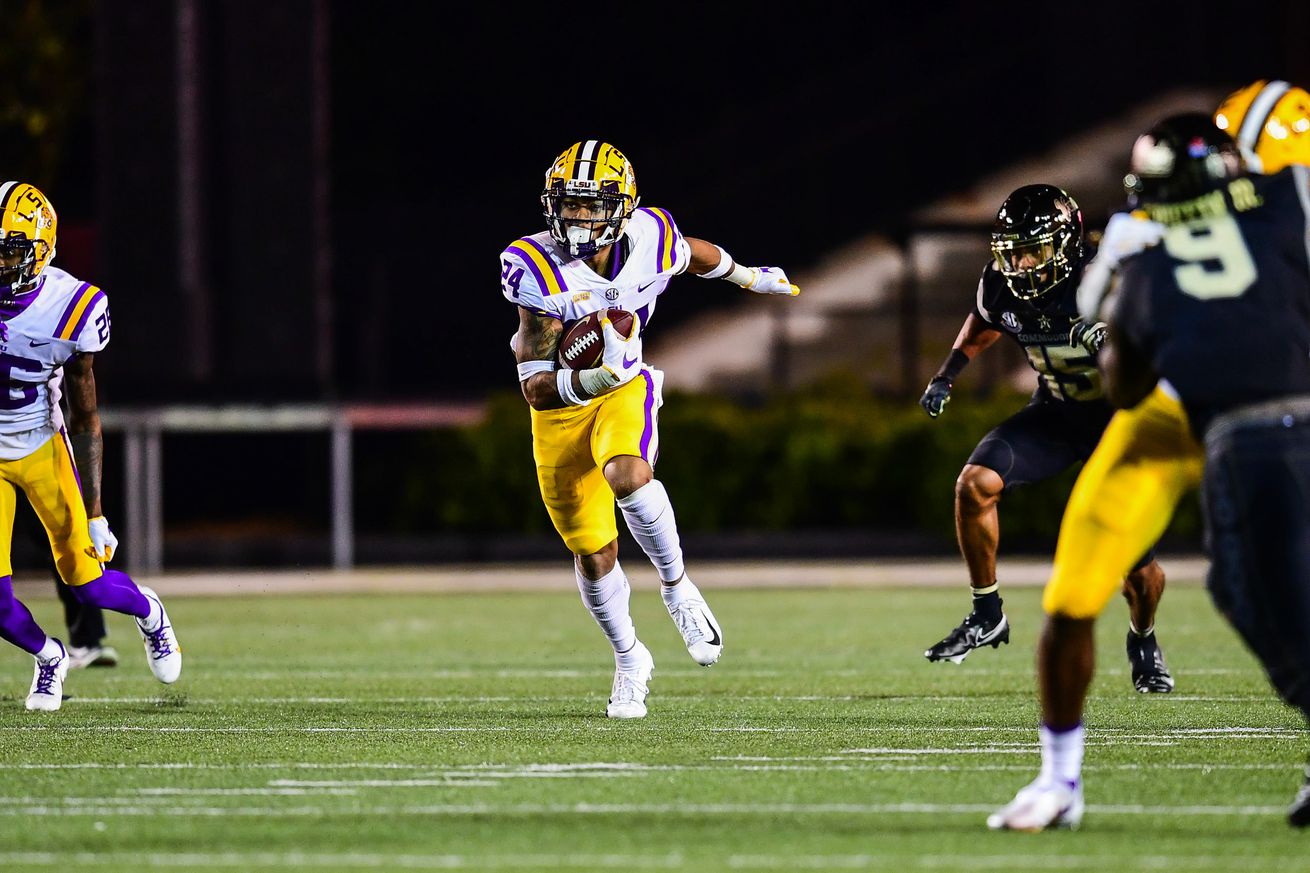 Brennan shines, Stingley returns, and ZVR boots into our hearts

Week two was a far sight better than week one. That’s what we get for playing Vanderbilt who might be really, really bad. Like, beyond usual “Vandy bad.” The Commodores were generally hopeless in this one which can be read either as a testament to LSU’s dominance and improvement from the disaster of the opening week or as a condemnation of Vanderbilt.

Probably a little from Column A and B. That’s the way life goes, but we won’t know how much for a few more weeks. So let’s just enjoy this one as it goes.

337. Myles Brennan’s passing yards. The difference here is this time he did it on 23/37 passing with 4 touchdowns. He also passed the eye test with flying colors. Part of that, again, is Playing Vanderbilt, which cures a lot of ills. But he looked a hell of a lot more comfortable in the pocket.

0. Sacks allowed. Brennan wasn’t exactly running for his life in week one, but he did get roughed up a bit and he had to rush a lot of throws. Not so much on Saturday. He stayed upright and had plenty of time. He didn’t look nearly as rushed and it showed up in the numbers.

8.6. John Emery’s yards per carry. Emery rushed for 103 yards on just 12 carries, which is pretty great, but more encouraging, he didn’t prop his numbers with one big run. His longest run of the night was 17 yards, so that’s an “honest” 8.6 rushing average. Every time he touched the ball, he was dangerous. Emery right now is LSU’s best offensive player. He even added 21 yards on 3 catches.

6. Derek Stingley tackles. Speaking of our best player, Stingley’s back! He had a pretty quiet game and didn’t get a credit for a pass breakup nor did he score an interception. But simply having your best player on the field makes a difference. Which leads us right into…

11/25. Ken Seals’ completion and attempts. Vanderbilt is not the high octane attack of Mississippi State, obviously, but the defense did completely hold Seals in check. Any time the opposing QB has under 50% completion rate, you did a good job. 11 of 25 for 113 yards and 2 picks is a stellar night for the defense, regardless of the competition. The defense needed this one.

3.9. Vanderbilt’s average yards per play. That’s bad. Well, good from our perspective. LSU outgained Vanderbilt 498-266, but both teams ran almost the same number of plays (69 to 68). While LSU was earning over 7 yards per snap, Vanderbilt was going nowhere. The difference was almost entirely in the passing game.

25.5. LSU’s punt return average. Stingley gained 92 yards on 3 returns, with a long of 48. He always seemed right on the verge of breaking one. LSU crushed Vandy in total offense anyway, but an extra 100 yards in the return game tilted the scales even further.

3. Zach von Rosenberg punts inside the 20. ZVR didn’t have quite the punting average in this one, settling for a mere 40.3 average on 3 punts (and a long of 54), but he nailed all three of them inside the 20 without a return. He has 10 punts on the season, and 8 of them have landed inside the 20 and 4 have been 50+ yards. He is making an early statement for the Ray Guy Award. It’s a trophy we don’t have.