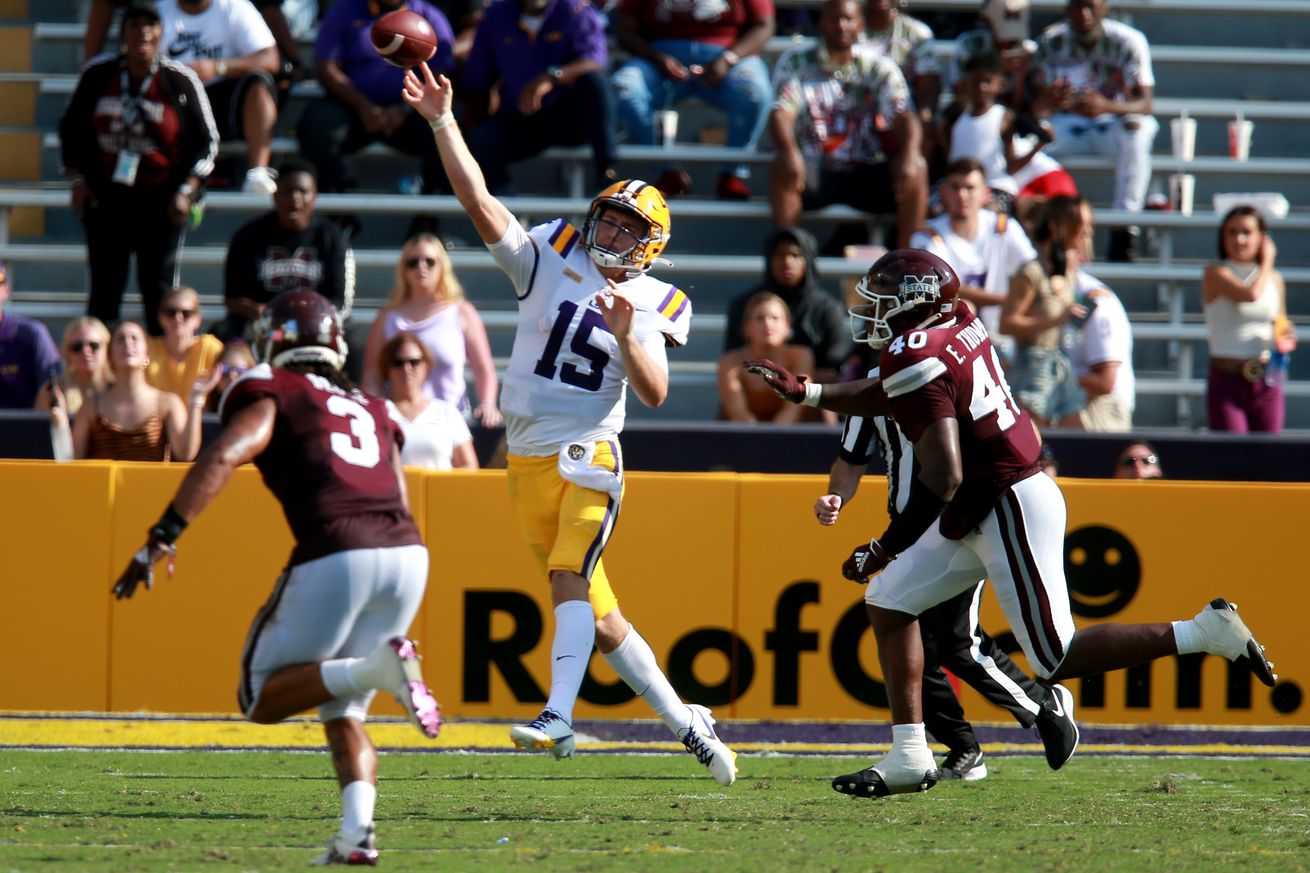 Welcome back to another season of behind the box score, I wish this season’s debut was as fun as any of last year’s entry. So instead of taking this as an opportunity to say “oh my God” or generally giggle at the awesomeness of the LSU offense, this box score is a diagram of frustration.

The nice thing about cold, hard numbers is that you can find some solace in them. While there are plenty of bad numbers to talk about, you can feel at least a little bit better when you sit down and see what LSU actually did on Saturday. Not much better, mind you, but better.

623. Well, there’s nowhere else to start but KJ Costello’s passing yards. He went 36/60 for 623 yards with 5 TD and 2 INT. That’s a ton of yards, but not the most efficient performance ever. Due to taking five sacks and throwing 24 incompletions, Costello only finished with a 7.31 ATVSQBPI (modified yards/attempt). That’s… good not great. No, it’s never good to allow an SEC record in passing yards, but a huge function of the yards was the sheer volume of passes thrown. To wit…

9. Mississippi St’s net rushing yards. OK, that’s a tad misleading because it includes sack numbers, but once we strip those out, State gained 49 yards on 10 carries. So much for establishing the run.

8-16. State’s third down conversions. The worst was that State was 5-9 on 3rd and long (9+ yards). LSU routinely got State behind the sticks, only for the Bulldogs to convert, three times for a touchdown. 3rd and long was a killer for LSU. By contrast, LSU was 5-17 on third downs, and 0-5 on third and long. LSU averaged just 1.9 yards on third down plays. State? 12.9. There’s your ballgame.

2. JaCoby Stevens’ TFL’s. Say what you will, Stevens played up to the standards of the jersey. He had two TFL, both sacks, leading the team in both categories. He recovered 2 fumbles and forced 1, again leading the team. You need your best player to play like it and for all of the issues on Saturday, JaCoby Stevens was not one of them.

8-122-2. Terrace Masrshall’s line. On the same train of though, Marshall had himself a game. Again, LSU’s best players played like their best players, and Marshall carried the offense with 8 catches and 122 yards. His game has not dropped off at all.

7. Enough positives. Brennan took seven sacks yesterday, which is really, really bad. Yes, the line is young and it had some breakdowns, but pretty much all criticisms of Brennan’s play shows up in this numbers. He was slow to make decision, slow to release the ball, and slow running the ball. He didn’t look nearly anywhere near as good as his solid 27/46 for 345 line. There’s two reasons for that. One, the sacks and general looking slow thing, but also he started the game 7/16 for 95 yards. He dug himself a pretty deep hole, and while his play improved in the second half… first impressions, ya know? 27/46 doesn’t sound that bad, but throw in the 7 sacks and you realize it’s actually 27/53 and now he’s a 50% passer who needed over 50 attempted to clear 300 yards. That’s… not good.

1. Losses. It was a bad loss, but it only counts as one loss in the standings. It’s up to Orgeron and the rest of the team to make sure you don’t care this game with you. No need to let it linger and lose this game over and over. It’s done. Time to move on.