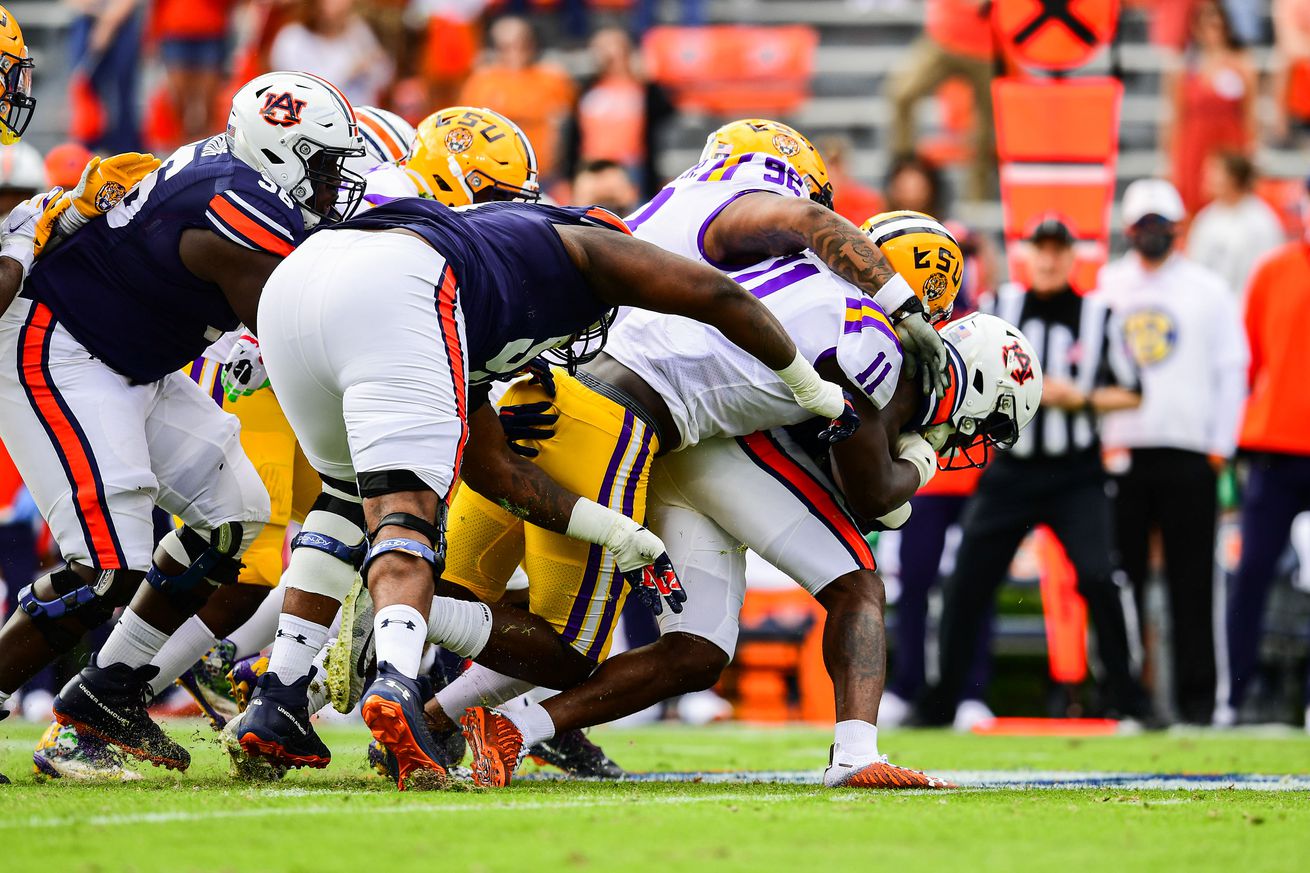 Anatomy of a murder

This was a bad loss. One of the worst losses in LSU history. A 37-point pasting to Auburn takes you back to either O’s first year and the 30-point shellacking to Mississippi St, or the final full year of Les and the twin 17-point loss to Arkansas and 21-point loss to Ole Miss as the season spiraled out of control, or, most obviously, the 34-point meltdown in 2014 at Auburn forever remembered as the Brandon Harris Game.

So, yeah, the loss was bad, so any attempt to minimize it will feel like rationalizing. So let’s start with this assertion: this was a bad loss and LSU is a bad football team. OK? All right, with that caveat out of the way, this loss wasn’t quite as bad as it looked. I don’t want to go crazy and say that there were a lot of positives, because there weren’t, but how about the negatives aren’t quite as bleak as they seemed. Well, some are. We’ll get to those, too.

0. Points scored in the first quarter. One of the things that makes this game so disturbing is that it wasn’t a straight pasting out of the gates. This was a close game and the LSU defense was even, dare I say it? Playing well in the early goings. LSU was moving the football well and was a bit unlucky to see their drives stall and not come away with points. The team looked pretty good for 15 minutes.

Which is sort of what makes the roof caving in so disturbing. That speaks to effort, not talent. They weren’t tied at zero due to a series of fluky and lucky plays, if anything, they were unlucky to not be ahead. This was an evenly matched game until suddenly it wasn’t. And that speaks to a team that gave up the moment there was some adversity. And that’s a real bad look for the coaching staff.

1.2. LSU’s rushing average. Yeah, that’s horrible. Oh, but that includes QB rushes, which is always misleading due to short yardage runs and sacks. You’re right. Let’s get rid of those. LSU running backs rushed the ball 15 times for 29 yards. That’s less than two yards a carry. That is horrific. Chris Curry had the longest run of the game, an 8-yard scamper. He had a 2.7 average, also the best on the team. Ty DDavis-Price managed to carry the ball for 0 yards. Zero.

Pretty much all of LSU’s offensive woes stemmed from an utter inability to rush the football.

2. TJ Finley interceptions. Honestly, not the biggest deal from a development standpoint. Young, aggressive QB’s are gonna throw picks. What was interesting was how quickly his play eroded after the fumble, as if he completely lost faith in the offensive line to protect him, which was not a totally unfounded belief. Before the fumble, Finley was 11/16 for 111 yards. Yeah, he had a bad interception, but he also had 2-3 drops, depending on how you want to score it. He was playing really well for a freshman debut on the road without the benefit of any run support. Hell, he was playing well even without those caveats.

Post-fumble, Finley was 2/8 for 32 yards with an interception which, to be fair, was not his fault, just a flukish tipped pass. Both of his completion came on the frantic final drive of the first half, which showed that he was starting to put the poor play in the rearview mirror. Really, Finley had two bad drives, but… that was two bad drives too many. The production wasn’t there, but if anything, this game ironically convinced me we need to give him more snaps. We’re playing for next year, and Finley looks like he has the entire toolkit, its just not there yet. Strangely, LSU ended up with more passing yards than Auburn, 314-300.

26. Auburn’s longest run play. Going into the game, the biggest worry was that Auburn would bust a bunch of big runs, but that really didn’t happen. Auburn rushed for 206 yards mainly because they ran the ball 44 times, protecting a huge lead. Tank Bigsby rushed for 71 yards on 15 carries, which is nothing special. LSU’s defense actually took huge steps forward in the rush defense, but it was obscured by playing from behind for so long.

11:32. The span of game clock it took Auburn to score 28 points. It happened quick, like a blitzkrieg. The fumble recovery started the cracks, but really, it was manageable until the following possession. Pinned on its own one yard line, Auburn drove 99 yards in 8 plays to score with just 40 seconds left in the half to take a 21-0 lead. That was death blow. Auburn then scored on its first possession of the second half, then scored against after the deflected pass turned into an interception. At 8:55 in the third, it was 35-3, and the game was over. It really was a brief stretch of play, but it defined the whole game. It was sort of the Perfect Storm of Awful.

48.9. Zach von Rosenberg’s punting average. Of his 7 punts, 4 went over 50 yards and 2 were downed inside the 20. The Ray Guy campaign continues. So, at least something worked.