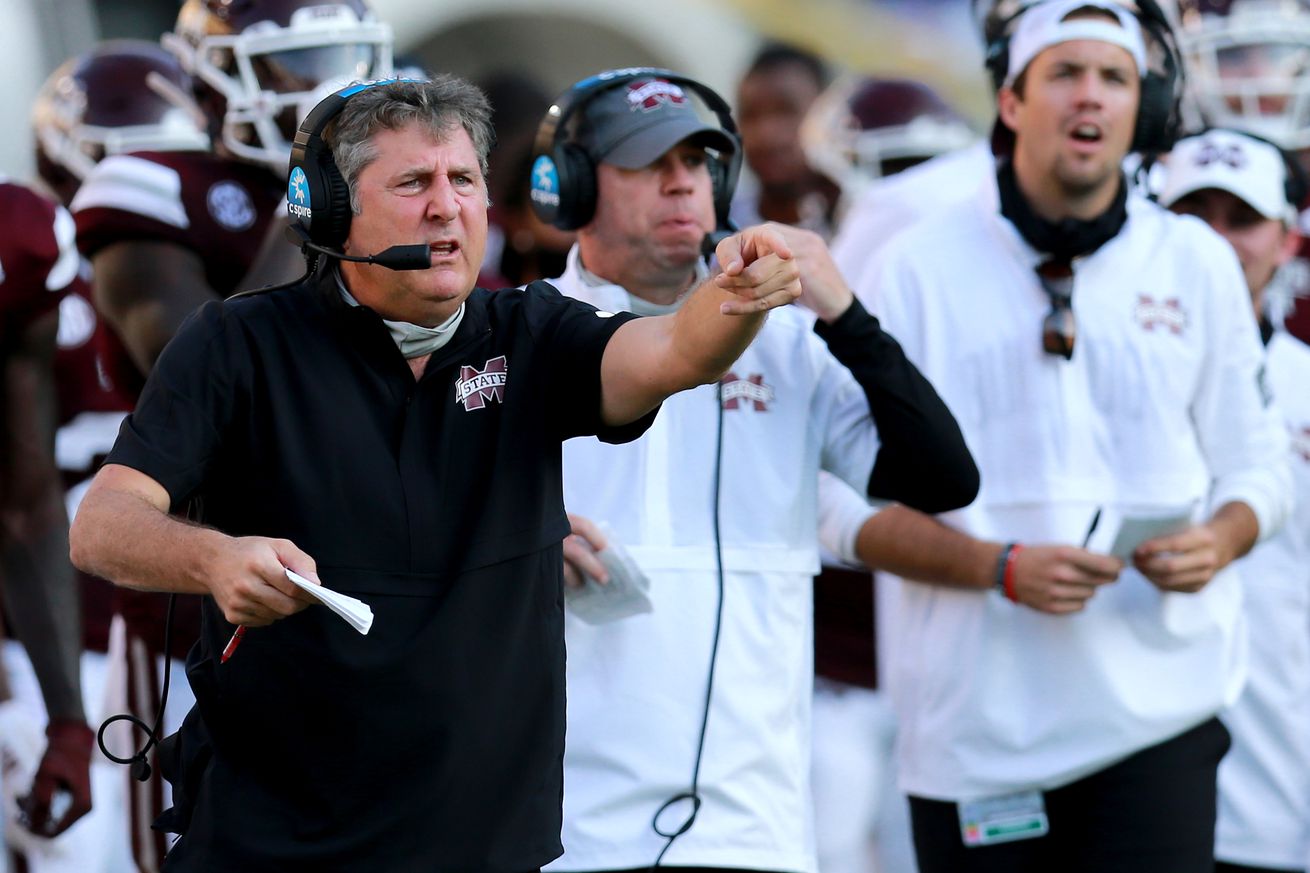 Still feeling down from LSU’s 44-34 loss Saturday? Are you wondering how on earth a school known for producing elite defensive backs could allow an SEC record 623 passing yards? I know I am.

I was skeptical about Mike Leach and his air raid offense being successful in the SEC. Now? While I still don’t think Leach can get the Bulldogs to Atlanta, he definitely showed that offense is not to be trifled with. For as long as he’s calling the shots in Starkvegas, the Bulldogs will be a complete pain in the ass.

I wanted to find closure from last week’s loss to Mississippi State. I wanted to know “is it always going to be like this?” So I reached out to some of our friends from the Pac 12 sites to get their perspective on what it’s like playing Leach on a regular basis. It helped me, maybe it’ll help you.

As a Utah fan, playing a Mike Leach team was maddening. More often than not Utah was more talented than Washington State, but that system he uses is just such a wild card, and an equalizer in a lot of ways. It’s not an overly complex system, but his players execute at such a high level, and if you have a damn good QB, like Gardiner Minsew, or now with Costello, that makes it even harder. What makes it even more maddening, possibly, is that since they throw almost every down, they’re never really out of a game. Sure, they’ll get their doors blown off from time to time, Washington had his number, but if he’s got some dudes that can play, and if he falls behind three scores, that team is a threat to come back at any point in the game. They’re going to get their yards, that’s just a given, Leach teams are going to get 400 or 500+ yards passing almost no matter what, you just have to find a way to give up field goals and not touchdowns. Can it get better? Yes, it can, but just know that it is such a unique system, and he’s such a unique coach, that results like this will happen.

I think Pac-12 fans were shocked for two reasons: One, while Mike Leach’s offense was certainly successful in the Pac-12, nobody expected it to be THAT successful THAT quickly against LSU of all teams. Two, nobody expected KJ Costello to be the quarterback that would lay waste to LSU’s secondary. Costello was certainly good with Stanford, but he was never a guy that struck you as a prototypical air-raid guy. This tweet made the rounds in Pac-12 circles and blew lots of minds.

I think the particular reason this shocked so many folks is because there are Pac-12 teams that seemed to more or less figure out Mike Leach over the last few years. Consider the last few times Mike Leach went up against Justin Wilcox at Cal and Chris Petersen/Jimmy Lake at Washington:

For those who don’t want to do the math, that’s an average of 14 points a game and a collective record of 1-8.

Now, to be fair, most other coaches in the Pac-12 couldn’t scheme as well as Wilcox and Petersen/Lake. And it’s certainly true that Washington had athletes that Leach’s low-end recruiting probably couldn’t compete with. But the players Wilcox inherited at Cal weren’t meaningfully more talented than what Leach was recruiting to Pullman, so I reject any argument that you need to have a clear talent advantage to stop Leach’s air raid.

What exactly did Washington and Cal do to shut down Leach? I’d listen to recently graduated Cal nickelback Traveon Beck, who played in every one of Cal’s last three games against Wazzu: you can’t beat Mike Leach by playing man. Cal and Washington generally played aggressive zone coverage, flooding the short field with secondary and linebackers, never blitzing, and kept everything in front of them. If you play man, Leach is just going to pick you apart with crossing pattern after crossing pattern. But as this great film breakdown demonstrates, certain zone strategies can make the decision making process much more difficult for the air raid QB. In Cal’s 2017 game, they came up with NINE sacks despite almost solely rushing three and four guys. That’s because the Air Raid is just too good at getting the ball out quickly to consistently get to the QB on a blitz. But you CAN get to him if you flood enough guys in coverage and disguise your coverage enough to make the QB hesitate.

I think Cal and Washington were particularly well equipped against the Air Raid because all of the things listed above are how they want to play defense anyway, so it’s things that are in the comfort zone of the players and the staff. I think defenses that try to be more aggressive, that take bigger risks, tend to have a tougher time slowing Leach down.

Does it get better? I have a hard time thinking that LSU won’t have the right combination of athletes and coaching not to hold their own, though you have my sympathies having another land mine thrown into the SEC west. I will add that Mike Leach is an arrogant wind-bag who regularly blames his players rather than himself and that means that beating him is immensely satisfying.

Mike Leach is a maddening beast. At Washington State, his Cougars mostly destroyed the Colorado Buffaloes. This was helped in no small part by the fact that the Buffs usually sucked for the last 10 years. Connor Halliday turned into Luke Falk turned into Gardner Minshew turned into every other amazing quarterback. They always scored points. Forget about ever winning in Pullman, Washington. It didn’t matter how much you sold out to stop the pass, Leach never ran and it always worked. It was stupid.

Adding to his stupidity was his much worse record when both he and the Buffs were in the Big 12. Dan Hawkins, DAN HAWKINS, somehow had a winning record against Mike Leach at Texas Tech. And that was when they had better teams! For some reason, he gets worse the less you coach against him. At least in our experience.

Unfortunately I cannot console LSU fans. Leach’s teams did that to Arizona regularly. We’re still trying to forget that 69-28 drubbing in Pullman a couple years ago. Washington fans would have a different perspective, though. Leach never beat the Huskies while at Wazzu, giving more credence to the idea that his Air Raid offenses don’t cut it against elite defenses. So maybe what Mississippi State did to LSU will be a one-off, but I wouldn’t bet on it. I’ve seen his teams throw for too many yards to believe that. And he’ll certainly have way more talent at MSU than he ever did at WSU.

Mike Leach’s offenses are going to score points and gain a lot of yards. Last year, Arizona State threw every look it at from a defensive standpoint at Washington State and simply nothing worked. It takes quite the defensive effort, mostly getting pressure with a four-man rush. You also have to take in account from a simply quarterback tools and talent aspect, K.J. Costello might be one of the best quarterbacks Leach has every had. I also don’t think many SEC schools use running backs in the passing game like his scheme does. The other thing from my perspective is I consider Derek Stingley the best defensive player in the country, there’s a good chance he could’ve cut the field in half for the Tigers in my opinion because that’s what a guy like Jaylon Johnson did with Utah last year. There were many factors into that result on Saturday, but the next time those two schools matchup it’ll probably be a lot better day for LSU having seen a Leach offense now.

The national narrative I’ve seen the past couple days seems to primarily be “Oh hell yeah, Mike Leach has come and proven his system can kick SEC ass, too! Look out, fools!” (Which, don’t get me wrong, it can and in many cases will.)

The good news is there’s a super simple formula to defeating it and, other than if Ed Orgeron were to just be too ideologically stubborn to implement this formula, there’s no reason why LSU can’t easily apply it and have success for, like, ever. I say “forever” because Leach never adapts his system. Jimmy Lake and Pete Kwiatkowski crushed Leach’s offenses year after year and not once did Leach try to change things to his advantage. So, once you’ve cracked it, you’ve cracked it.

Really, all it comes down to is A) rush four ONLY — three if you have the personnel to do it is even better, B) drop everyone else into zone coverage and C) — and this one’s the closer without which the rest doesn’t matter — tackle really, really well.

Washington employed this the whole time under Petersen and subsequently never lost to Mike Leach. In fact, over the course of Chris Petersen’s UW tenure with the DCs of Kwiatkowski and Lake, they outscored Mike Leach’s WSU 176-82. The most WSU ever scored during this period was 17 in 2016, and that was effectively a garbage time touchdown because the Huskies already were up 45-10. (Leach beat UW once, in his first season in 2012, when the Dawgs were coached by Steve Sarkisian whose teams were not know for their, um, discipline.)

In summary: You can do this LSU! I believe in you! It shouldn’t be hard since you have all the pieces in place to get it done!