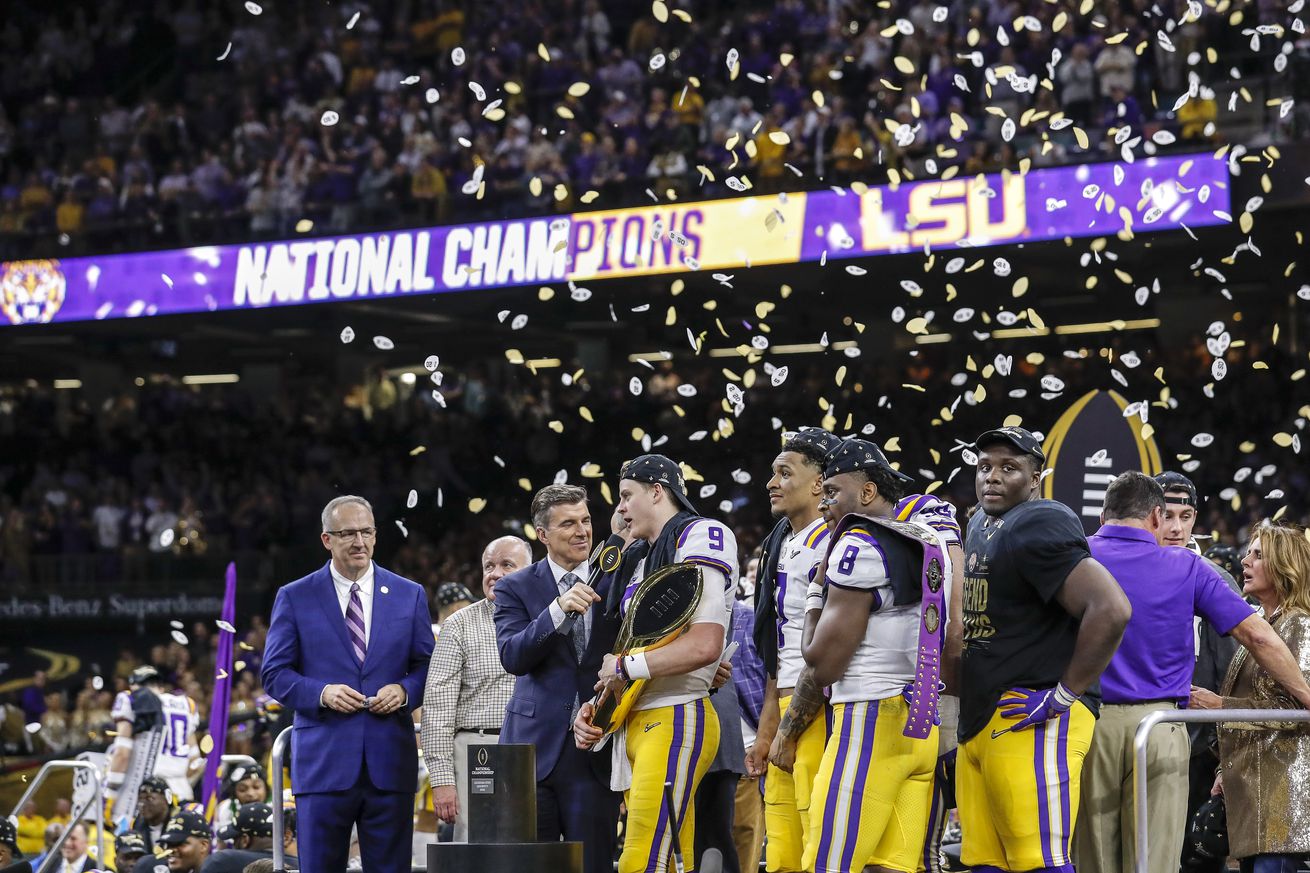 Assuming all 10 games get played, what kind of record will LSU have this year?

LSU loses a lot. To expect last year is just too much. Orgeron has recruited well and this team still has a lot of talent, but it lacks the depth of last year’s squad, and virtually all of its returning production. LSU is losing 5671 passing yards, 1782 rushing yards, 4 of its top 5 receivers, almost the entire offensive line, 4 of its 5 leading tacklers, and virtually all of its leading pass rushers. The cupboard isn’t barren, but it has been raided pretty hard. Throw in the usual difficult schedule, which is at least friendly enough to provide a little ramp up before LSU gets to the real monsters on the schedule, then it shapes up to a team that should go 7-3 or 8-2. Losing that much talent and still wining 8 games would show a lot about the program Orgeron is building. This is a young team that will make some infuriating mistakes, but it also a talented squad that should keep the party going. I’ll settle on the 8 wins, including its second straight over Bama. Bama will win the West anyway.

7-3. I think Brennan will be good, not great. The real downfall is the lack of established playmakers around the field. I know LSU deals with this every single year, but they lost a lot even by program standards. They’ll have enough talent to beat the cellar dwellers, the Mississippis, South Carolina, and maybe Texas A&M but I don’t see anything that has them on the same plane as Florida, Auburn, and Alabama. And that’s okay. LSU won the title with the best roster in program history, and when half of that roster leaves then a drop-off is to be expected. It’s the natural order of things.

Uhhhhhh pshhhhhh hmmmmm God this season is so weird. I guess 8 is the safest pick? Yeah let’s go with that. Also let me be clear that if Alabama beats LSU in a low capacity Tiger Stadium, then it deserves and asterisk and obviously would be different at full capacity.

But if LSU beats Florida or Auburn in low capacity/empty stadiums then we would’ve beat their ass anywhere, anytime. Fans don’t matter.

8-2, I’ll be a little generous, I think O does a really good job following up last year and only drops to Florida and Bama, who I think could both make the playoff.

Unlike yesterday I can’t as easily go against the groupthink. I mean I could, but that would be me saying LSU either totally craters and goes like 6-4, or doesn’t miss a beat and goes 9-1 or undefeated. LSU’s too good to lose four games (though you could talk me into it considering they’ll take trips to Florida, Auburn, and A&M) but probably not good enough to go 9-1 at worst/10-0 at best. Course I’d love to be wrong on that one.

So pencil me in for 8-2 with losses to Florida and Alabama. I think LSU’s better than Auburn and A&M regardless of location. But going to the Swamp where Florida has the more experienced quarterback? I don’t like that. And look I’m still living off the high of last year’s win over Alabama, but the Tide have proven they can reload year after year; and while I certainly think/hope LSU can become that, they need to prove it first.