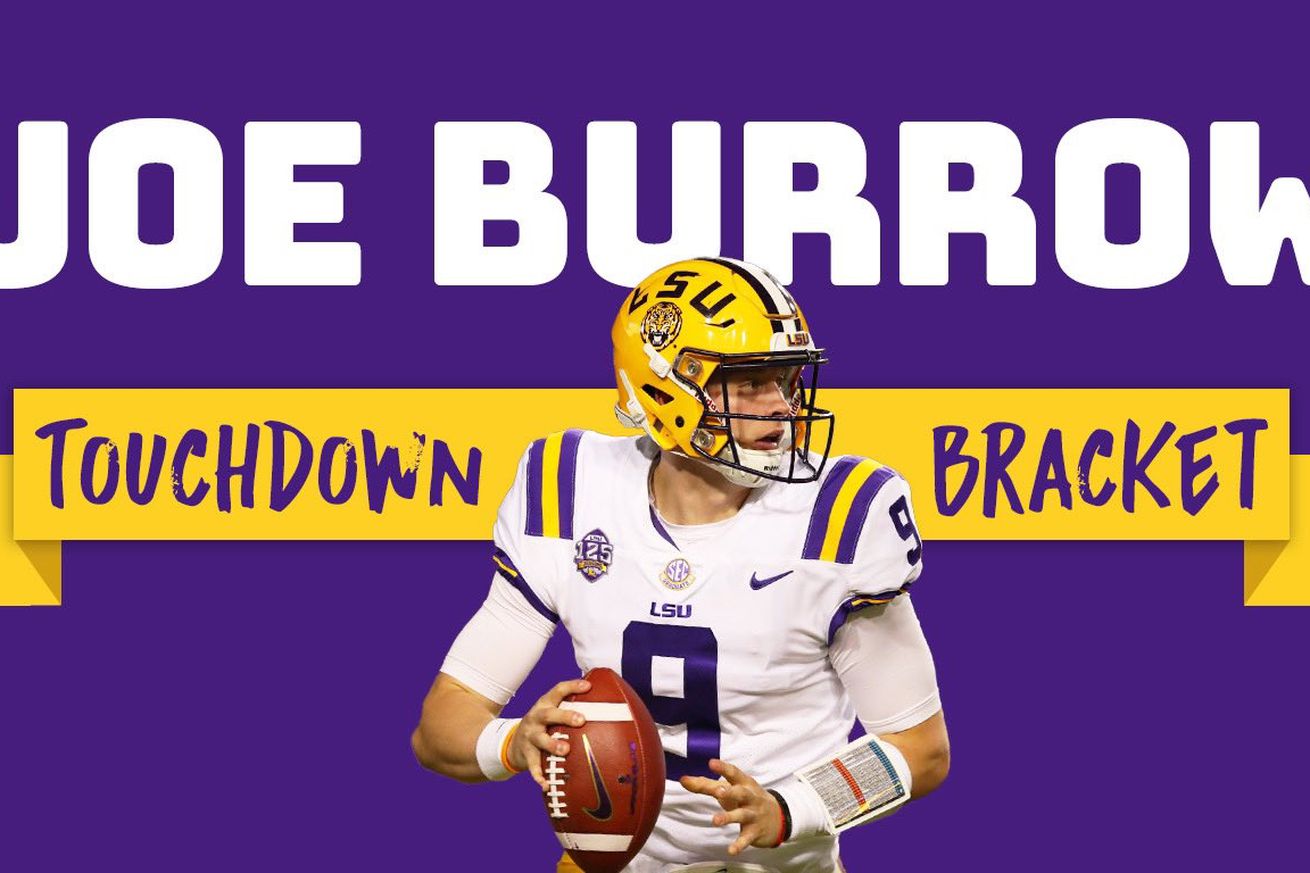 What was the best Joe Burrow touchdown of 2019? Let’s find out

Joe Burrow scored quite a lot of touchdowns this past season.

A truly staggering amount of touchdowns. Burrow scored 65 touchdowns over the course of his 15-0 National Championship, Heisman Trophy Winning 2019 campaign. That’s an absurd number. In fact it’s the perfect number to have a March madness style bracket of our very own.

So here’s the premise. Evan and I put together a bracket where we seeded every single touchdown Burrow scored this past season. It’s just like an NCAA Tournament bracket: four regions, 16 seeds per region and we even have a play in game to see who advances to face the No. 1 overall seed. Each day we’ll post a matchup where you, our dear reader, votes on what was the best, craziest, significant, most awe-inspiring touchdown Joe Burrow scored this year. Here’s the bracket in its entirety, painstakingly put together by Evan.

Some things to note from the bracket, the number one seeds are: 3rd and 17 against Texas, the touchdown pass to Clyde Edwards-Helaire against Alabama, Jamar Chase’s first touchdown against Clemson and the knockout punch he caught against Florida; as an homage to Justin Jefferson, we decided to honor each one of his four, count em FOUR touchdowns against Oklahoma, as the bracket’s four seeds; and the highest two seed, the one Evan and I almost put as our final No. 1 seed, was the 78-yard bomb to Chase against Texas A&M. Also, as Evan figured out, by posting one matchup a day every day from here on out, the final vote will take place on June 5, as in 6/5 as in 65 goddamn touchdowns by the greatest to ever do it.

We’re kicking things off by focusing on the top left-hand side of the bracket. The matchups are as follows:

No. 1: 3rd and 17 to Jefferson vs. No. 16: QB sneak against Utah State/Tunnel screen to Terrace Marshall vs Georgia Southern

No. 2: 62-yard bomb to Thad Moss against Oklahoma vs. No. 15: 7-yard RPO to Marshall against Georgia

No. 4: 19-yard post route to Justin Jefferson against Oklahoma vs. No. 13: 11-yard post to Marshall vs. Georgia Southern

With that in mind, here’s today’s match up. Think of it as our version of the NCAA’s play in games that take place in Dayton. The winner advances to take on the bracket’s No. 1 overall seed: 3rd and 17 vs. Texas.

Remember how LSU sleepwalked to start this game? The Aggies trailed by a single point at the end of the first quarter. Between the 11 A.M. kickoff and a monster game against Florida looming next weekend, LSU didn’t look sharp from the jump.

Utah State intercepted Burrow on LSU’s second possession of the game and stuffed him on a 4th and 1 the following possession. Those two turnovers led to six Aggie points and LSU was suddenly in a game.

Upsets are what makes college football fun. But a David beating a Goliath is only fun when its not your Goliath being slain and after the infamous Troy loss in 2017, Utah State was making some of us relive a few unpleasant memories.

That was until Joe Burrow had had enough and put the Aggies away right as the second quarter began. This particular Burrow touchdown was different. Not only was it scored by Burrow using his legs, he was actually under center. Ball on the one. QB sneak right up the middle. Touchdown. 14-6 Tigers and the game was essentially over from that point on.

Not a lot to say about this particular touchdown pass. LSU is cruising in its opening game of the 2019 season. The new-look offense had already put 28 points on the board and its fifth touchdown was set up thanks to the Tiger defense forcing its second consecutive fumble.